After last night’s stunning upset of Ruslan Provodnikov at the hands of Chris Algieri, the fighters gathered at the post fight press conference, here are the highlights of the presser:

New WBO Junior Welterweight Champion Chris Algieri:
“I used to love watching Arturo Gatti fight when I was in high school but I swore I would never want to fight like him. I guess tonight I went back on my word a bit.” 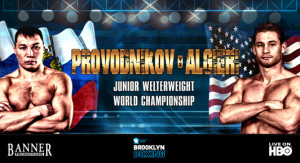 “There were a lot of doubters coming into this fight, about how bad I really wanted it. Ruslan kept talking about how he would die in the ring and was I willing to do the same and I think that I showed I belong as well. Although I don’t come from a torn upbringing and I came from the suburbs of long Island, I don’t have to fight, I fight because I love to fight.”

“In my view power punches win fights, he may have out jabbed us but with power punches it was 1000 to one and we landed most of the shots and that’s why I thought we won the fight.”

“I have no regrets, I thought we did enough, I thought the power shots were there and you know the thing is we’d like a rematch maybe in Vegas or somewhere in neutral area, we would love a rematch, that’s what I want.”

“Next I could take on the winner of Canelo-Lara, Carlos Molina and of course Floyd Mayweather, because he’s in my weight class and he has what I want, the WBC belt. And Miguel Cotto had a great performance so if I’d like to get in the ring with him as well.”

“I can’t take nothing away from Brian Rose, he was 25-1 and a tough guy. I’ve just been working all my life to put my skills and my head together, and made it work. I plan to make all of my fights look this easy.”

“I’ll tell you something more important than if there’s a rematch clause. The reality is that we’ll sit down and this was a fantastic fight and obviously we’re going to look to see what’s best for the future of Chris.”