I’ll be diplomatic here and just say that if you saw Saturday’s Provodnikov-Algieri bout as a close and competitive true upset victory for Algieri, then your understanding of how a fight is scored is completely different from mine.

When judging a fight, it’s alarmingly easy to allow everything around the actual fight to shape your perception. If you saw Algieri beat Provodnikov,  you were probably scoring something other than the actual in-ring action.

Yes, Algieri survived two knockdowns and an eye that looked like it had been hit with an exploding meatball. Yes, he survived all of this, stayed on his feet, and answered the bell round after round in a bout he was supposed to lose via slaughter. We get it. Tough, white, well-spoken, handsome, classy, professional kid on a stage where he didn’t belong, yet he did better than anyone expected. Shit, the kid’s entire back story is a made-for-TV movie. 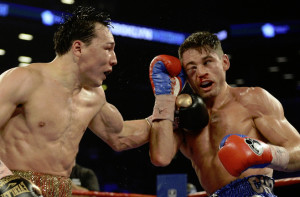 The HBO broadcast crew wasted no time in painting the narrative for what would turn out to be the take-away story of the evening. As early as the second round, they marveled at the kid’s resolve and his will to keep fighting. As he remained on his feet, they crowed about the underdog actually trying to win. By the late rounds, even as their own on-screen judge delivered decisive pro-Provodnikov scoring tallies, they were applauding this survivor’s gritty efforts.

Very early on, it was established that Algieri was a virtuous overachiever and, as a result, his every move became amplified and magnified. A jab was no longer a jab, but it was a jab against all odds, by a one-eyed fighter, who many felt didn’t belong there. When Provodnikov missed a punch, it was from the unbelievable effort of Algieri, the middle class kid overcoming all odds in his pursuit of a world title. It was enough to bring a tear to the eye.

But what, exactly, did Algieri actually do to win the fight Saturday night at the Barclays Center?

There was a lot of backpedaling, a lot of arm punches aimed at keeping Provodnikov off him. Provodnikov’s shortcomings as a boxer also played into the win and, of course, the inherent stylistic problems that come with fighting a guy who is not only in perpetual retreat, but also gifted with a significantly taller body.

Algieri is moderately skilled and did about as well as could be expected against a Provodnikov, who, by the way, was more than a tad overrated coming into this contest. Algieri’s greatest success in this bout was in not being obliterated.

This was not a case of judging aggression vs. boxing. It wasn’t the classic brawler vs. slickster conundrum. In the two major criteria of scoring, Provodnikov was the better man. In effective punching, Provodnikov ruled the ring and landed almost all of the truly effective punches. In the area of ring generalship, determined by who is controlling the tempo and pace of the action, again, it was all Provodnikov as he came at a survival-mode Algieri and pushed the challenger around the ring.

What we saw on Saturday was a case of the story outshining the reality, the sizzle outselling the steak. On way too many scorecards– including two of the three that mattered– Algieri got just about every benefit of every doubt. Algieri winning the bout 114-112 meant that he had to have won eight of the eleven rounds after his disastrous opening frame. If one can honestly say that, from rounds two through twelve, Algieri dominated that fight to such a degree, then there’s nothing left to discuss. But, realistically, even if you saw the fight reasonably close, could you honestly say that Algieri did enough to practically sweep all those rounds?

It’s much more likely that the compelling story being played out before their eyes and given voice by the broadcast crew pushed more than a few observers into being hyper-focused on everything Algieri was doing. It pushed them to give the underdog extra credit when applicable and the benefit of the doubt when necessary. Each round viewers were prompted to admire Algieri and then left to declare a winner.

When I finally got around to watching the HBO broadcast (I initially watched a Latin American telecast), I completely understood the mind-boggling wave of support for the guy who clearly lost the bout. Intentional or not, viewers were being sold on the upset from the moment Algieri answered the bell for the second round.

“The fight that I’m going to try and zero in on and put together is Pacquiao vs. Algieri, after Chris beats Provodnikov on June 14th.” — Bob Arum

On a more sinister note, it’s worth pointing out that, as confirmed to me by Banner Boxing (Provodnikov’s full-time promoter), this was Ruslan Provodnikov’s last optioned fight with Top Rank. Questions as to whether Algieri now owed options on future fights to Top Rank have yet to be answered by Algieri’s promoter, Star Boxing. Boxing is boxing, though, and a seamier explanation for the hard to explain can’t ever be ruled out.

Arum talked up Pacquiao-Algieri  prior to Saturday’s bout and a quick-hit “Real Life” Rocky vs. Pacquiao story makes a lot of sense– until it hits the ring, of course.

Did this have something to do with how this fight was scored? With no options left on Provodnikov, a negotiation was in the immediate future if Top Rank had to fall back on a Pacquiao-Ruslan bout in November. A smart move would be to opt for easier-pleased fighter management with lower purse demands and a style even more tailor-made for a Macau Pacquiao showcase. A good “Rocky” angle for the November bout may even stimulate some added interest for a show not expected to make a killing in the U.S. market.

And yeah, yeah, yeah…half the boxing media says that there’s no corruption, the other half looks at corruption as a charming aspect of the game. So, I realize that even bringing this up is punishable by endless social media snark.

Whatever the case, Provodnikov getting the not-deserved loss is a sad story in and of itself. It’s like having this earnest, honest dock worker with a dopey grin finally get his American citizenship to begin his journey towards the American dream– only to get mugged outside of the swearing-in ceremony. More tragic is that he’s been mugged before– vs. Mauricio Herrera and, arguably, against Timothy Bradley. Welcome to America. Welcome to boxing. Welcome to the art of selling a story.

In this library of pain, suffering, and triumph, the great, white, middle class daydream is still the story that trumps all others.

I guess it’s only appropriate that I make the following announcement after such a divisive bout.

I will be taking a hiatus from the sport and from the public eye, in general, starting this June 19 and extending through the 19th (or so) of July. I’m going to be taking care of some personal matters and, hopefully, lining all my ducks in a row for a MAJOR, sport-shattering announcement shortly after I come back.

In the meantime, the staff here at The Boxing Tribune will keep things up and running and continue with Rants in my place.

It’s been about five years now since I’ve begun to make a full-time living as a boxing writer. I’ve pissed off a lot of people, burned a lot of bridges, but I’m proud to say that I never betrayed myself (even when asked to do penny-click fodder) and I never betrayed you, the reader, who so graciously gave me a chance to be heard.

It’s only fitting that, on my last week of active duty, one of my more persistent cyber-stalkers– an angry Ring Magazine reject four years into his angry-fapping obsession with me– has decided to once again issue attacks on me via the comfort of his mother’s kitchen table in Brooklyn.

To be honest, I had almost forgotten that this guy was still around. But a look through time to when his obsession began only affirms that I’ve taken the right track when it comes to my career. Five years is a long time in publishing and it’s an infinity when you try to maintain some sort of consistency in the area of ethics and integrity. And while my sad stalker has betrayed almost every one of his core principles on his road to mediocrity in that span of time, I’ve been able to stay consistent and respectful of my beliefs, while delivering to much larger audiences.

Now, my Monday Rants generate thousands of real hits each week– not those generated by Pacland news aggregator placement– and I’m beginning to see the real results of my bomb-throwing efforts. The Boxing Tribune is stronger than ever and I’m proud to have this staff by my side. You won’t find a more honest, loyal, and down-to-earth crew anywhere in this business. They have been hit by some of the shrapnel aimed at me and blackballed by those bloggers apparently trying to teach me some bizarre lesson about being “collegial.” They don’t deserve this treatment, but to their credit as men, none have complained and none have wilted under this freeze-out. Their mission is mine– speak the truth and stand up to authority when need be.

Through Inside Fights, Fox Sports, Yahoo, and back home again, I’ve done what I like, how I like it, and never went back on my word as a man. I’ve never pandered to specific writers for added exposure, never secretly campaigned to be a member of an organization I supposedly hated, and never hid behind social media to deliver my hits. Love me, hate me, whatever…I never stopped being true to myself.

I’m proud to have that type of legacy.