“Where else is there to go? I’ve gotten myself into the best shape in a long time. If I don’t get it done now, I’m never going to get it done.” —Antwun Echols

“It’s just a fact I enjoy fighting and since the age of eight it has been a part of me. I don’t know anything else” —Danny Williams

My favorite type of fight is when the frontrunner is beating his opponent from pillar to post but then, ever-so-gradually, he begins to gas and allows the sure loser to become an unlikely winner (Delvin Rodríguez vs. Jesse Feliciano in 2007 was a perfect example). Close behind is the mismatch that turns out to be an upset and when it involves a supposedly “shot” fighter who apparently is due for a visit to the slaughterhouse, all the better.

This brings me to Vivian Harris, who most boxing people erased years ago. In fact, his last 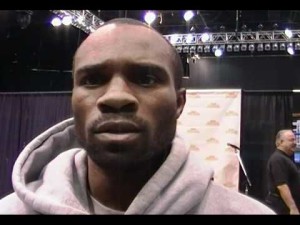 win (before 2013) came in 2008 when he stopped one Octavio Narvaez in New Jersey. This followed a KO loss to Junior Witter in 2007 with the WBC light welterweight title at stake. Then he went 1-7-1-1 with five of his losses coming by way of stoppage—some brutal and early.

After a successful amateur career , Vivian turned pro back 1997 and quickly established a pattern of aggressiveness as he beat a number of tough competitors (including Gary St Clair, Michael Clark, Golden Johnson, Diosbelys Hurtado, Souleymane M’baye, and Oktay Urkal (twice and both times in Germany).

When he faced Ray Oliveria in 2000, Harris was not able to match Oliveira’s signature high punch volume and lost a 10-round decision. Later that year, Harris was matched against Ivan Robinson, a fight which many observers thought he won convincingly but he was forced to accept a controversial draw. This one started a pattern of strange and/or controversial endings for the man from Guyana who makes New York his place of residence.

On October 19, 2002, Harris defeated the talented Hurtado and captured the WBA junior welterweight title which he successfully defended in the next two years against M’baye and Urkal (twice).

In June 2005 and before his loss to Junior Witter, Harris fought and hurt Colombian Carlos Maussa in the first round. He continued to apply pressure, looking to end matters early but Maussa survived and started to work his way back into the fight as Harris grew visibly tired. Then, in the seventh round, Maussa caught Harris with a left hook that sent Harris to the deck. As the referee began counting, Maussa delivered another shot as Harris was down, although Harris was already hurt by the first blow, and the subsequent late punch did not land cleanly. In any event, Harris failed to answer the 10-count and the title belt became Maussa’s.

Vivian rebounded with wins over Stevie Johnston (39-3-1) and Juan Lazcano (37-3-1) but then came the Witter loss and Vicious Vivian soon became less-than-vicious.

In 2009, during a bout with Mexican Noe Bolanos, he and Bolanos collided heads in round two.. Harris stumbled towards his corner and collapsed while the ringside doctor was talking with him. Harris appeared to be conscious but not entirely alert. He left the ring on a stretcher and was taken to a local hospital as a precaution. The referee stopped the fight officially at 40 seconds of Round 2, declaring the match a NC. Once again, a strange ending marked one of Vivian’s bouts.

Said Vicious Vivian, “When I got the head butt, I remember walking to the corner. After I walked over to the corner, I don’t remember anything else until I was on the stretcher. I was a little shocked. When I had the (collar) around my neck, I was like “what is this around my neck?” That’s when I started to catch my senses. It was maybe a few seconds or minutes, I don’t know how long I was out, you know?”

After the aforementioned winless streak which included losses to Lucas Martin Mattysse, Victor (then Vicious) , Jesse Vargas, Leonardo Tyner, and Ed Parades and ended with a KO loss to Brian Rose in the UK in October 2012, many were calling for the former WBA and IBA World light welterweight champion to call it a career for his own well being as he showed little of the fighter he once was. However, in March 2013, the Guyanese beat limited Shakha Moore (11-18-3) in boxing crazy Lowell, Mass, setting himself up for a go against popular but power–challenged Danny O’Connor (23-1) at the Electric Factory in Philadelphia.

Surprise of surprises as Vivian eked out a win in a fight where the scoring was as bizarre as anything I have ever witnessed. Judge Lynne Carter had it 96-94 for Harris which seemed fair enough. However, when Judge Pierre Benoit scored the bout a complete shutout for O’Connor–100-90– the O’Connor fans went bonkers. But lo and behold, Judge Alan Rubenstein turned around and had it almost as lopsided– 99-91– for Harris almost provoking a riot as the loud pro-O’Connor spectators groaned their disapproval. In short, one judge had it 99-91 while the other had it 100-90 but in opposite directions. The end result was that Vivian Harris had scored more quality shots while O’Connor had the volume in his favor. The major, albeit controversial, SD upset kept Harris’s career on life support.

“What is about to go down Saturday night in Monterrey, Mexico, is everything that is wrong with boxing. Vivian Harris is going to fight. He is taking on Jorge Paez Jr. in a fight that should not be taking place…. Harris is a shot fighter. A badly shot fighter, who has not been a remote factor for about seven years.” –Dan Rafael March 17, 2014

“Harris [is] a fighter that should be put down. If he were a horse, he’d either be taken to stud or the glue factory.”—Steve Kim of MaxBoxing

“I cannot be the only one who finds something distasteful about suggesting a fighter is fit only for breeding or the glue factory, or describing him as “damaged goods”, especially when the writer professes a sanctimonious concern for the same fighter’s welfare. Nor can I be alone in detecting a whiff of condescension…” -Matthew J. Bailey http://therumpuscompass.com/tag/vivian-harris/

On March 22, 2014, and taking the fight on short notice, Harris, seemingly in solid physical shape, went deep into the heart of Mexico to fight homeboy and heavily favored Jorge “El Maromerito “Paez Jr. (37-4-1) who was on a ten fight win streak that included two wins over Omar “El Businessman” Chavez (32-2-1) and a stoppage over Colombian Ivan Hernandez (29-4). Again, surprise of surprises as the aggressive Vivian used his experience to stymie the heavily favored Paez Jr. and garner a decision win by scores of 96-94, 96-94 for Harris and 95-95.for Paez. Monterrey, Mexico is famous for being a fair and honorable place and usually in sports they get it right. This was a good example of getting it right. Still, while this surprisingly refreshing result went squarely against the grain of home-cooked decisions and restored a bit of faith in fair judging, it didn’t quite erase the lingering foul stench of the Bradley-Pacquiao 2012 infamy in Las Vegas.

Paul Magno of http://theboxingtribune.com called this “canned outrage” and “blind grandstanding”, quoting with approval Sam Geraci of Fightnews, who said he could not understand “how any person with ethics can write something that harms the earning potential of a fighter without having verified information on why a fighter may have been denied a license in one region and granted one in another.”

The bottom line: Thirty five year old Vivien Harris can stick around a while longer.