Gennady Golovkin is the type of fighter that has burly men’s men weak in the knees and moist in the boxers. Yes, the love is great for this man and it will only get greater as he tears through a division ill-equipped to handle him.

Saturday night, in his first bout against a true Top 5-7 fighter, “GGG” once again made headlines as the smiling assassin and well-mannered purveyor of destruction against Australia’s Daniel Geale. And to add one more “did you see that” moment to his growing legend, he delivered the third round knockout blow while being pushed back by Geale’s best shot of the night. 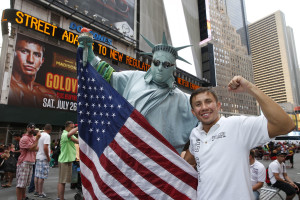 Maybe it’s just the contrarian in me, but I’ve been cautious about anointing Golovkin as anything other than a really good middleweight. These offensive dynamo types come along every once in a while, are universally overrated for a couple of years as “Feared” and “Avoided,” then usually die a quick death when they run into a smart, A-List boxer with a plan.

This Kazakh killer, after all, hasn’t exactly fought a who’s who of elite-level middleweights on his way to the top. Supporters will say that this is because everyone’s afraid, hiding behind slot machines and casino dumpsters at the mere mention of his name. Others will more correctly point out that HBO’s low-ball purses have made it very easy for quality opposition to avoid the hassle of dealing with GGG altogether. (For this bout, Golovkin’s comparatively paltry 750K purse hints at the fact that they had to add some juice to Geale’s final paycheck of 600K in order to make the bout happen. Still, it was a relatively low payout for a Madison Square Garden HBO main event between a reigning world champ/rising star and someone many feel should still be a world champ.) But despite the hype machine in place and his utter dominance in dealing with fringe contenders and solid second tier guys so far, it’s still reasonable to have some reservations about GGG and whether all the fist-pumping macho man love is truly justified.

Well, in short, it is indeed justified. But that seems to be a moot point because there’s nobody at middleweight right now capable of proving whether Golovkin is truly “for real” or not.

When done right, there is just as much artistry in a good offense as there is in an elite-level defense. Golovkin is a thing of beauty in the ring and a prodigy in the business of hurt. He has a genius-level IQ when it comes to his offensive game and it would benefit all fighters to pick apart his fight footage and try to replicate what Golovkin does by instinct.

Maybe, then, boxing’s biggest and baddest beasts wouldn’t be befuddled by simple footwork and sound defensive technique. And, maybe, people will stop blaming defensive fighter like Rigondeaux and Mayweather for being too good. Believe it or not, there used to be a day when not only could defensive fighters handcuff offense-minded fighters, but come-forward attackers knew how to force stylists into a fight.

There was a storm of outrage coming from the muddled minds of many in the boxing media last week when five-division champ Floyd Mayweather was approved for a promoter’s license by the Nevada State Athletic Commission.

Critics wanted Mayweather’s history of domestic violence brought up during the hearing. These champions of human rights wanted Mayweather grilled about his crimes, made to sweat, then have to come to terms with a cold and quick denial. Maybe they then hoped for him to be tasered and dragged out into the dessert, halfway between Vegas and Pahrump, for a lead pipe beating.

However, much to dismay of the die hard holier-than-thou types, a commission full of flunky political appointees rubber-stamped the application of one of Nevada’s biggest money makers without much thought. Who woulda thunk it?

The funny part is that some of these same fellows who have become human rights watchdogs when it comes to Mayweather and his promoter’s license are responsible for putting a murderer promoter and a confessed rankings rigger promoter into the Hall of Fame.

In the Saul Alvarez-Erislandy Lara fight, we saw a light heavyweight and a super middleweight fight as middleweights to establish dominance of the junior middleweight division.

This is just one example of how insane the sport of boxing has become as it slips far away from being a sport and gets ever closer to its eventual resting spot as merely a series of exhibitions.

Good luck to those high-minded, utterly naive bloggers and their fantasy rankings leagues in trying to nerd-away the sport’s real issues. Not all the secret meetings and self-important press releases in the world are enough to change the fact that it’s no longer 1959.

Here’s some tough love for the secret society cliques: There are no more true, lineal champs. The four-champ system puts money in everyone’s pocket, including the fighter. A one-champ system would likely kill off any growth the sport has experienced in recent years. And, really, just the idea of basing your rankings on the decisions issued by those organizations you want to run out of business? Come on. You have to know how silly that is.

The Monday following the Rigondeaux win was filled with online speculation regarding the talented Cuban’s next move. Will the market welcome him with open arms? Was free agency in his best interest? All very heady stuff and certainly worthy of bandwidth.

Except Guillermo was not a free agent at all. He may have had his last fight under the Top Rank banner, but he still had a promoter– one who jealously defends its right to represent the two-time Olympic gold medalist.

At one point, Top Rank did try to scoop up Rigondeaux, but found themselves beaten back into a co-promoter role by his actual promoter.

Caribe Promotions, which responded to my inquiries by reaching out to Boxingscene with the answers, is now Guillermo’s full promoter. Per their statement to Boxingscene, however, they are willing to offer another company a co-promoter deal.

And why not? Let someone else do the heavy lifting while they take their cut for doing little more than Tweeting instagram photos of Rigondeaux’s weigh-in. Sweet little deal, there.