HBO’s split-site triple-header was capped off by an ugly, thrilling, but ultimately unfulfilling welterweight clash which saw Brandon Rios (32-2-1, 23 KOs) win a ninth-round DQ over Diego Chaves (23-2, 19 KOs) at the Cosmopolitan of Las Vegas in Las Vegas, Nevada.

Chaves, who barely made it into the US from his native Argentina on Thursday due to visa issues, gave Rios all he could handle for eight rounds. But in the mix and between the back and forth action, there was plenty of roughhousing on the inside and plenty of room for the ultra-involved Vic Drakulitch to deduct one point from Rios (in the fifth for throwing Chaves to the canvas), two from Chaves (In the third and the eighth for holding) , and eventually disqualify 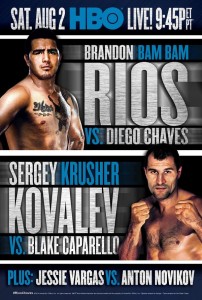 Chaves after one final angry entanglement up close seconds after a Chaves headlock takedown of Rios.

During the actual bout, though, Chaves seemed to have the slightly upper hand and was leading on two of the judges’ scorecards 75-74 against a third judge’s 74-75.

In the middle bout of the televised triple-header at the Revel Resort in Atlantic City, New Jersey fans got to see at least one true, decisive finish Saturday evening as Sergey Kovalev (25-0-1, 23 KOs) stopped Blake Caparello (19-1-1, 6 KOs) in two rounds.

After suffering a shock-the-crowd flash knockdown in the first round, defending WBO light heavyweight champ Kovalev went about his business and did what most assumed he would– demolish poorly-regarded Aussie challenger, Caparello .

In the second round, a Kovalev straight right hand to Caparello’s midsection would drop the challenger and mark the beginning of the end for the southpaw. Moments later, a left-right would again send Caparello to the canvas and although he would beat the count, one final offensive surge from Kovalev would send him back down and cause referee Sparkles Lee to wave off the contest.