The outside world is just finding out how close Oscar De la Hoya came to being essentially forced out of his own company. According to an article written by ESPN’s Dan Rafael, De la Hoya was approached last September, just eight days into his rehab stint, with a $100 million offer to sell his company to an unknown buyer.

The former six-division world champ was in a dark place at the time, struggling with addiction and all of the professional and personal issues such struggles entail. The easy way out would’ve been to cash out and officially let go of the company that he had unofficially let go of a long time ago. After all, at the time, Richard Schaefer had been given full reign to handle the day to day operation of the company while Oscar partied and cashed checks.

But, to his credit, Oscar opted to fight back. He put in his time getting healthy once again and emerged from rehab swinging, flat-out rejecting the offer to sell off his company after noticing that Schaefer and advisor to the stars, Al Haymon, were to have powerful roles within the infrastructure of the proposed new ownership. 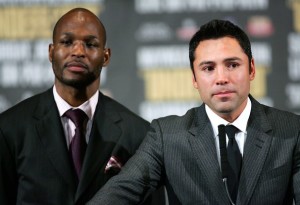 As time passed and he began digging some more, Oscar began to discover other disturbing issues. In general, his company was being run as if its main goal was to build up other people’s assets. Many fighters being promoted with Golden Boy dollars and exposed to the world via Golden Boy’s deal with Showtime, were not signed to Golden Boy contracts. And the beneficiary in every one of these cases seemed to be Al Haymon, who, as mentioned, was allegedly to work with Schaefer in the new incarnation of Golden Boy Promotions.

To make a long story short, nastiness ensued and Schaefer was pushed to resign. De la Hoya is now seeking $50 million in damages from his former CEO.

But that has left the “Golden Boy” with a major mess to clean up. He needs to get some of these free agent talents to actually sign contracts with his company– no small feat since all are being advised by Haymon. His TV deal with Showtime has made for an uneasy truce at the moment because even a Haymon intent on taking his talent elsewhere still needs TV dates. For the time being, they need each other.

But the Golden Boy-Haymon unspoken truce may be short-lived, especially considering the poor-quality stopgap shows recently made by Golden Boy using Haymon talent. Unappealing match-ups like Danny Garcia-Rod Salka, Lamont Peterson-Edgar Santana, and Adrien Broner-Emmanuel Taylor seem to be little more than fulfilled TV dates to appease Showtime. Behind the scenes, both sides are likely planning for life without the other.

Forget the hyperbole about the actual fight, Hopkins-Kovalev is a flat-out Worldstar roundhouse right to the jaw of Haymon and his interests.

Haymon signee and WBC light heavyweight champ, Adonis Stevenson came over to Haymon and Showtime with the idea that he’d make bigger money fighting a unification with IBF/WBA titlist Hopkins than one on HBO with WBO belt holder, Kovalev. And if Richard Schaefer was still at the helm over at Golden Boy, they’d be likely announcing a fall Stevenson-Hopkins mega-bout right now.

Instead, Golden Boy reached over boxing’s Berlin Wall and approached Main Events about a unification showdown with their guy, Kovalev, to be held on Showtime rival, HBO. It was a deal that reportedly was offered, negotiated, and finalized in 30 hours in order to get Hopkins out of a pointless IBF mandatory defense. But, perhaps more importantly, it was hurried along to coincide with the final Kovalev-Blake Caparello press conference and Saturday’s Kovalev curb stomping of his hapless challenger.

And, while some will laud De la Hoya’s willingness to cross all barriers in search of the best possible match-ups, the real reason for Hopkins-Kovalev may not be quite as noble.

By leaving Stevenson in the background without a main stage opponent, De la Hoya has single-handedly shut down, arguably, Haymon’s hottest property behind Floyd Mayweather. With one simple phone call, Golden Boy has made Stevenson’s decision to jump ship a moot point and, quite possibly, a career dead end.

And Hopkins, who was initially concerned about the ousting of Schaefer and even mentioned a desire to join Haymon, now appears to be a flag-waving Golden Boy patriot once again. It can only be assumed that Oscar inspired this confidence in the 49-year-old 5-percent owner of GBP via heartfelt motivational speech or an extreme sweetening of his back-end business arrangement– maybe both. [UPDATE: A new Hopkins interview with Boxingscene’s Rick Reeno sheds some light as to Hopkin’s mindset in all of this and the two-belt champ’s suspicion that there may have been a Haymon-backed hustle in play, aimed at removing the IBF belt from around his waist.]

Whatever the case, the message has been sent. Oscar can and will do business without Haymon while, likely much to Haymon’s consternation, the behind-the-scenes power broker still needs Oscar’s support in order to generate paydays for his fighters. Even boxing’s biggest star, Floyd Mayweather, who vowed to never work with Golden Boy again after the Schaefer resignation, is back working with Oscar and company. With bridges to HBO burnt, there’s simply no other choice.

Consider this a not-so-subtle flexing of the muscles by an Oscar De la Hoya once again present and presiding over his Wilshire Blvd. corporate headquarters. In the grand scheme of things, this particular stable of Haymon-advised talent needs Golden Boy more than Golden Boy needs them.

Right now, Golden Boy’s only major players not tangled up in the unfolding Haymon drama are Hopkins and 24-year-old Mexican wunderkind, Saul “Canelo” Alvarez. For the time being, that’s enough to more than stand their ground in this boxing business staredown. Without Haymon and his fighters, Golden Boy will go on. For right now, at least, the opposite can’t be said.

Until Haymon, Schaefer, or some other entity can create their own promotional company and somehow generate their own multi-fight, multimillion dollar TV deal, Haymon will have no choice but to follow Oscar’s lead. And, over time, some of that gigantic stable of talent amassed by Haymon could very well decide that signing a contract with the one who actually controls access to TV dates is in their best interest. At least, this is what De la Hoya hopes.

One look at the once red-hot Adonis Stevenson standing all alone and faced with a foreseeable future of shadowboxing fringe contenders for small paydays should let the world know that Oscar De la Hoya is ready to fight.

As Oscar recently told Tim Dahlberg of the Associated Press, “The sleeping giant has woken up.”

You can email Paul at paulmagno@theboxingtribune.com if you like. He really does answer all of his mail. You can also buy his book, Notes from the Boxing Underground! Paul is a full member of the Burger King Kids’ Club, a born iconoclast, and an ordained minister in the Universal Life Church.