Danny Jacobs made everyone feel good when he beat Jarrod Fletcher and Danny Garcia did what was expected when he obliterated prohibitive underdog Rod Salka, but in between, another NYC butchering took place. 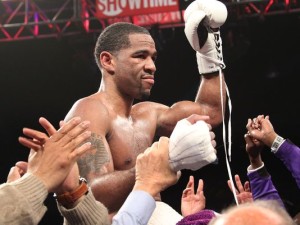 Heavy favorite Lamont Petersen (33-2-1) beat Edgar Santana (29-4) by tenth round stoppage when the doctor at ringside advised referee Peter Santiago that enough was enough– “enough” being an understatement.

Santana, who was highly touted at one time, was simply too tough for his own good and took an ungodly number of vicious body shots with some savage head punches mixed in. By round 5, he was no more than a big bag for Petersen to practice on and it was ugly to watch. In fact, I was yelling “stop it, stop it,” at the monitor.

Santana is no slouch, has some fine wins on his ledger (including a win over Josesito Lopez in 2008), and has a chin made of kryptonite, but once the impact of the Petersen body attack set in, “The Prince of Spanish Harlem” no longer had any sting on his punches nor did he have any answers for Petersen’s nonstop mugging.

Having recently watched Ola Afolabi use Anthony Caputo Smith as an uppercut bag until the doctors advised referee Steve Smoger to stop the gruesome butchering, I thought perhaps that slaughter was an anomaly. See: https://www.youtube.com/watch?v=pfsig9KvLYo

But lo and behold, I was treated to another one-sided and extended beat down.
To his credit, announcer Al Bernstein was the only Showtime Team member to comment that maybe they ought to start thinking about stopping the fight. The doctor must have read his mind because he immediately shouted to the recalcitrant Santiago to do just that. Santiago should have done it earlier, but this begs the question, what was Santana’s corner doing?

At least the ring doctor got this one right, if not a bit late.