“It’s just a fact I enjoy fighting and since the age of eight it has been a part of me. I don’t know anything else”—Danny Williams

Over the years, I have written at great length about the business of boxing rarely having a happy ending. Sometimes a good ending is within grasp but for whatever reason, the boxer fights on frustrating his or her fans. For every Larry Holmes, there seems to be ten Roy 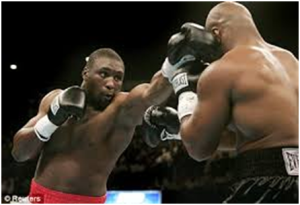 Jones’ Junior’s. This brings to mind the incredible see-saw career of Danny “The Brixton Bomber” Williams. Being stopped by Audley Harrison in 2006 was certainly not a highlight, but his signature “up” was taking out heavily favored Mike Tyson in a shocking and convincing manner when they met in 2004 setting up a fight with Vitali Klitschko in which Danny was savaged. However, there may have been a fight back in 2000 when he fought Mark Potter (14-2 coming in) for the vacant BBBofC British heavyweight title and the Commonwealth (British Empire) heavyweight title that was even equally remarkable.

“Courage is the discovery that you may not win and trying when you know you can lose.”—Mark Krause

Anyone who thinks there is no such thing as a puncher’s chance needs to watch this video—and anyone who wants to know about not giving up when the odds are stacked against you needs to watch this fight. Others have demonstrated uncommon courage in the ring; this was Danny’s turn to show it.

Williams badly injured his right shoulder in one of the early rounds and Potter quickly pressed the action with Danny trying to hold him off as best he could. Then in the sixth round, Williams missed with a right that had “ending” written all over it. In so doing, he grotesquely dislocated his already injured shoulder and was in terrible pain. His right arm sagged and he grimaced, but he hung on and managed to keep Potter at bay with his left jabs as ringside fans gawked in horror.

However, Potter inexplicably let Danny off the hook by not launching an all-out attack. Then midway in the round, the “Brixton Bomber” caught Potter with an astonishing left hook (some called it an uppercut) that sent Mark down and almost out. Danny jumped on the badly hurt Potter and decked him two more times before Referee John Coyle called a halt to this remarkable fight. This time the crowd was up and roaring in disbelief. Here is the final round of the fight: https://www.youtube.com/watch?v=QY1jzjTjIhY

The affable, devoutly religious, and very popular Williams soon underwent surgery which left him out of action for eight months. He came back and fought unbeaten New Zealander Kali Meehan at Bethnal Green. It took him just 32 seconds—yes 32 seconds– to dispatch the same fighter who almost beat Lamon Brewster over twelve rounds and who currently sports a record of 41-5, having recently KO’d the much-traveled Michael Sprott in one. Curiously, Williams is 2-1 against Sprott. Here it is: https://www.youtube.com/watch?v=ozA65ZmFJbE

Williams, a heavy favorite, was 27-1 when he met the Turkish Bull from Bosporus in Hamburg and suffered a humiliating TKO loss in which he was decked three times. Danny weighed 258 pounds for this one.

“Against Tyson no one expected anything from me which is why I was able to go out there and perform the way I did… I was surprised when the end came in the fourth but when I had him going the fear of the man kept me throwing punches.”—Danny Williams

After going 8-2 between July 2001 and July 2004, the relatively unheralded Williams met none other than “Iron Mike” Tyson (50-4) in Louisville, Kentucky in 2004. Tyson was coming off a 49 second waxing of Clifford Etienne in Memphis and most expected he would do the same to the 265 pound 9-1 underdog from England. Danny chose to trade punches with Tyson and that strategy looked to be a mistake when Iron Mike wobbled him several times with hooks and uppercuts in the opening round.

Williams was deducted two points in round three by referee Dennis Alfred for hitting on the break and a low blow, but Iron Mike, cut over the right eye from an unintentional headbutt, seemed to be tiring allowing Danny to wear him down and assume control. Then, after absorbing Mike’s bombs, Danny suddenly exploded in the fourth with a barrage of over 20 solid and unanswered punches to knock out the legendary Tyson leaving him in a bloody heap. Danny was no longer unheralded; he had become a “Giant Killer” among boxing fans throughout the world. This would be the pinnacle of his roller coaster career. It’s all here: https://www.youtube.com/watch?v=LZLN2eGQxPg

For his “reward,” the Bomber got a shot at another” iron worker” of sorts, Vitali “Dr. Ironfist” Klitschko (34-2) in Las Vegas on December 11, 2004 with the WBC heavyweight title at stake. Williams’s euphoria did not last long, as he was brutally bombed to the canvas on four different occasions by a seemingly aroused and especially vicious Klitschko. This was another instance of where the corner was more courageous than the fighter. By his own admission, Danny said he would never be the same. If so, maybe it should have been the opportune time to leave, for rumors had it that Danny had invested his money well. https://www.youtube.com/watch?v=E7wC6hGRBa0

Nevertheless and despite being butchered by Klitschko,, Danny Williams marched on undaunted, and in March 2007 he once again achieved an “up” when he KO’d Scott Gammer (17-0-1) in Wales for the BBBofC British heavyweight title in a crossroads fight for both men. Amazingly, he reportedly weighed 228 pounds for this outing, the second lowest weight of his career (the lowest being 227 in his very first pro fight back in October 1995). In an interview after the fight, Danny (37-6) talked about retiring on a high, but instead he came back on April, 12, 2008 to beat American Marcus McGee and thereby stay in the mix. Later that same year, he also beat John McDermott (25-3) by a deceptive MD—deceptive because Williams was penalized three times for infractions. This too offered a splendid opportunity to get out –and even Danny knew it.

After Klitschko, Williams won 4 in a row against decent opposition, lost 2, and then went undefeated in 5 more before being stopped by so-so Pole Albert Sosnowski in 2008. One of his wins came against Konstantin Airich on May 30, 2008 in one of the most bizarre and controversial fights in European history as reflected in this remarkable video: https://www.youtube.com/watch?v=JsDNTF-EUG4

Williams had a total of 3 points deducted in rounds 2 and 5. In addition he was given 2 standing 8 counts by Spanish Referee Alfredo Garcia Perez in round 3 despite not actually being knocked down or even touching the canvas. Another knockdown was counted when he slipped in round 4.

In the 6th round Danny launched a series of extremely bruising shots on his German opponent sending him reeling across the ring. At this point, Airich’s promoter Ahmet Oner ran over and rang the timekeeper’s bell himself to end the round and save his fighter, even though there was still 1:28 left. The fight was allowed to continue after the shortened 6th round, but after seeing his man absorb more heavy punishment in the next round, Oner finally threw in the towel giving Danny a strange 7th round TKO victory and cementing Referee Perez’s place in boxing infamy.

“…Blood is on the hands of the fans who support the sport blindly; the writers who feign outrage after the fact, but will never push for true regulation and accountability; the promoters and managers and trainers who still allow fighters to march to their death for the sake of just one more pay day. The entire system—dealing in flesh and cultivating a complete lack of transparency on all levels—is drenched with the blood of fallen warriors.”–Paul Magno

“Danny wouldn’t be granted a license by the British Board. He retired and when he wanted to come back he was advised that he should retire…”—Robert Smith of the British Boxing Board

As was his wont, Danny then bounced back from the Sosnowski embarrassment with still another win over John McDermott in 2009 giving him one more chance to leave boxing with his dignity intact. However, Danny Williams is one who simply does not know when to quit, and after McDermott, things rapidly fell apart.

Danny lost badly and surprisingly to obese Carl Baker (now10-8) in 2009 and then not surprisingly to Dereck Chisora in 2010. The Baker loss marked the beginning of the end. Williams came in for the Del Boy encounter at 273 pounds and this prompted British boxing officials to eventually take away his license to fight in the UK. Danny then began fighting under Latvian auspices and sadly came back in 2011 going 3-2 against decent opposition including the dangerous Manuel Charr (17-0 at the time) in Spain, Sweden, and Germany.

On September 8, 2012, he lost to Janne Katajisto in Finland and then fought and lost three more times during the year. In 2013, Danny went 1—5 and so far in 2014, he is 1-3 with his most recent loss coming in a 4-rounder in Russia to Pavel Doroshilov who was making his professional debut. Danny beat unknown human punching bag Martin Stansky (2-33) by stoppage in May. Amazingly, 32 of Stansky’s 33 losses have come by KO. During these bouts, Danny’s weight has varied between 274 and 290.

These ignominies have taken place in the Czech Republic, Poland, Abu Dhabi, Latvia, Romania, and Russia.

As for Danny’s countless retirement announcements and farewell fights, they should not be taken seriously as they are akin to snipe hunts..

Danny has become nothing more than fodder where even a moderate punch is now enough to send him to the canvas. Yet he insists on fighting on even though the risk-reward has long ago moved into an alarmingly dangerous zone where the road only knows one direction. Fact is, his adoring fans probably sense that Danny doesn’t really know when to quit because he simply doesn’t know anything else. However, like Roy Jones, Danny probably doesn’t grasp how frustrating and sad it is for his fans to watch this tragedy play out.