In one of Showtime’s supporting bouts Saturday night, WBC super-middleweight champion Sakio Bika (32-5-3, 21 KO’s) will defend the title against Anthony Dirrell (26-0-1, 22 KO’s) for the second time. The two fought a 12 round draw in December when they met at the Barclays Center in Brooklyn, New York.

In the first contest, Dirrell handled himself well early on, his superior boxing ability giving him the edge in the first half of the fight. He had the champion dazed and down in the fifth round but couldn’t close the show. Bika survived the round and closed the gap in latter half and despite the knockdown and a point deduction in the 11th frame, retained his title with a draw. Bika disputes the draw, and claims the low blow that caused his point deduction was a clean body shot that should have been scored a knockdown. Originally he had no interest in a rematch, but has opted to finish his business with Dirrell and has Carl Froch in his sights next. 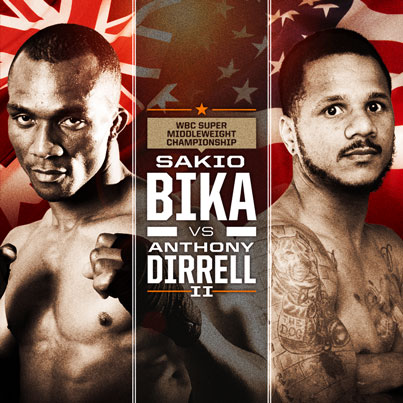 The key for Dirrell in this match is movement. With a height and reach advantage, his boxing ability can make this an easier fight than the first if he can stay off the ropes and tag Bika at long range. He showed in the first bout that he has the power to hurt the champion, but finishing the show is easier said than done against an experienced pro like Bika. Bika’s been in with some of the best fighters in his class and has never been stopped. Four of his five defeats however have come against top notch boxers with fast hand and foot speed, guys that were able to thwart his attempts to take the fight into the trenches. He can be out boxed if he can be avoided, but how long can Dirrell avoid him? With a wealth of experience under his belt, Bika’s guy who knows how to get the job done and that’s a huge advantage over Dirrell, who’s only world class opponent has been Bika.

The end result boils down to experience vs. education, whether Bika can impose his will on the challenger and use his rough house tactics to take Dirrell out of his game plan, or if Dirrell has learned enough from the first bout and can make the necessary adjustments to come out with the win.

In another televised contest of the broadcast, Omar Figueroa (23-0-1, 17 KO’s) makes the second defense of the WBC lightweight title against Daniel Estrada (32-2-1, 24 KO’s). 2013 was a good year for Figueroa: he defeated both Henry Auraad and undefeated Abner Cotto by first round stoppage, the latter victory earning him the NABA, WBC FECARBOX, and WBC Silver lightweight titles. A decision in July over Nihito Arakawa made him a world champion, winning the interim WBC lightweight championship, which led to an April contest against Jerry Belmontes, which he won over 12 rounds to become the full WBC title holder. Sixteen of his 17 stoppage wins have come inside three rounds and his last two contests have gone the 12 round distance. The Texas native has moved back home to train for this contest and is working with his father, Omar Figueroa Sr., in order to be closer to his family which is his main source of motivation.

Estrada is on a nine fight winning streak, with five coming by stoppage. He’s a former WBC Youth, Caribbean, Continental Americas, FECARBOX, and Silver lightweight title holder. Like Figueroa, he owns a win over Nihito Arakawa in a 2012 contest that went to a technical decision when an accidental elbow injured Estrada’s right eye. Coming into this contest, he’s training with Juan Manuel Marquez and Nacho Beristain in Mexico and is confident he can pull out a victory over the defending champion after being the mandatory challenger for some time. His last contest was a third round stoppage of Hugo Armenta in December.

Jorge Linares (36-3, 23 KO’s), who won an eliminator in March (also over Nihito Arakawa) is the mandatory challenger for the winner of the contest. Linares is also on the card, facing Ira Terry (26-11, 16 KO’s) in a scheduled eight round bout.