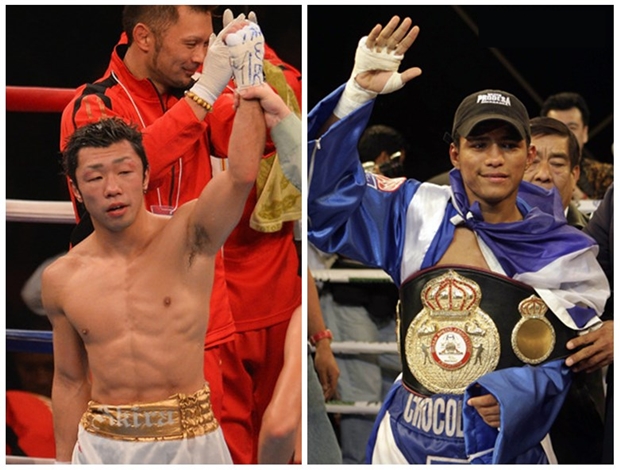 If Roman Gonzalez were a middleweight, he’d be getting the same rabid acclaim currently aimed at Kazakh world titlist, Gennady Golovkin. An argument could be made that, pound-for-pound, Gonzalez is actually the better fighter of the two and there’s definitely no argument that the native of Managua, Nicaragua has been up against a much higher level of opposition.

Nine years into a pro career that he started at the age of nineteen, the 5’ 3” “El Chocolatito,” has beaten a laundry list of top shelf opposition from strawweight through flyweight, has captured world titles at 105 and 108 lbs., and has worked his way up to top contender status in the 112 lb. division.

Much has been made about this potentially history-making achievement, but Gonzalez is quick to shoot down the high-minded talk as soon as the Arguello name is brought up.

“I could go on to win titles in five divisions and I would never be able to compare myself to him,” Gonzalez recently told Notifight.com. “He was a great fighter and taught me many things about boxing. He was like a father to me.”

But even as the words leave his mouth, the reality begins to set in. Gonzalez, at twenty-seven years of age is, arguably, already the second greatest fighter to ever come from his home country and, if he can defeat Yaegashi, he’ll have the hardware to prove it.
But this, of course, all depends on him walking into the home country of a popular defending champion and coming back home victorious.

The 31-year-old Yaegashi is widely regarded as the lineal and true flyweight champ and while his resume is not as thick as that of his well-regarded challenger’s, it’s certainly nothing to disregard. Victories over Toshiyuki Igarashi and Edgar Sosa, as well as a razor-thin decision loss to Kazuto Ioka in 2012 place him among the most high of the lighter weight set.
Also a two-division world champ, Yaegashi’s brief run as strawweight titlist has been followed by a coming of age as a flyweight champion, already three-defenses into an eighteen-month reign.

Scott Graveson, owner of AsianBoxing.info (an English-language authority on the Asian fight scene), has this to say about Yaegashi and the fighter’s temperament which influences his ring style:

“He is tough as old boots, has no quit in him and can easily give up his solid boxing skills to be dragged into a war. At his best, he’s a sharp counter-puncher who combines his counters with quick raids that see him getting in and out without many problems. At his worst, he’s a defensively vulnerable and offensively reckless fighter who leaves himself open to big shots that force him to rely on his warrior toughness. For many fans, he is better-known as a warrior who fights toe-to-toe, though at his heart he’s actually a very well-schooled boxer. Sad he often lets his heart for a war overrule his intelligent boxing brain, making fights harder than they need.”

Gonzalez, on the other hand, has yet to receive a bad review when it comes to style, class, and temperament.

A darling of the “hardcore” boxing intelligentsia for the last several years, “El Chocolatito” is an offensive savant in the ring, displaying technique and execution well beyond what should be expected of a fighter with his background and natural physical ability.

At 27 years of age, he’s now at his physical prime and has tempered his wrecking ball ways of yesterday with a more mature, complete offensive approach to the game. It’s rare to find a fighter in the lowest weight classes gifted with true one-punch power and Gonzalez reaped the benefits of this gift throughout his runs in the strawweight and junior flyweight divisions. To his credit, he has become more mature and more well-rounded as he has risen in weight and as his one-punch power becomes slightly less of a factor.

In terms of weaknesses, count the occasional lapse in concentration leading to defensive slip-ups as his chief concern in the ring. Gonzalez, in the past, has occasionally fought down to the level of his opposition as well, although that hasn’t been much of an issue in recent performances.

All predictions point to this one being a solid tactical fight that quickly explodes into full-on war between a brave and proud defending champion and an equally noble, but much better-armed challenger.

Asian fight scene guru, Graveson, has the most likely take on the Yaegashi-Gonzalez clash:

“Gonzalez is too good offensively to go to war with, though Yaegashi will almost certainly be dragged into a toe-to-toe fight. And with Yaegashi’s face swelling more prominently now than it once did, I see only one outcome– Gonzalez by TKO. Whether it’s the referee, the ringside doctor or trainer Hiroshi Matsumoto that stops the fight is immaterial. Somebody will save Yaegashi from his own bravery in the second half of the fight.”

If Gonzalez can meet and defeat this latest challenge, expect another all-out war in the near future as he will be positioned to face the winner of the September 6 bout between two-belt champ Juan Francisco Estrada, who he beat via unanimous decision in late 2012, and the always-brawling Giovani Segura.

Beyond that, challenges from the likes of Brian Viloria, Juan Carlos Reveco, Kazuto Ioka, and Edgar Sosa will allow him to affirm his legacy as one of the greats of this era and, perhaps, take a big step closer to the monolithic legacy left by beloved countryman and hero, Alexis Arguello.