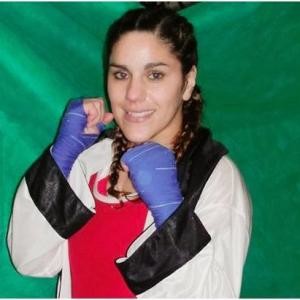 It may have taken her three opportunities, but Victoria Noelia Bustos (12-3) won the bout that counted. Friday night at Club Sportivo America in Rosario, Santa Fe, Argentina, the IBF lightweight champion successfully defended her title with a 10 round unanimous decision over Natalia Vanesa del Valle Aguirre (7-2-3) in what was the third match up between the two.

It was the second defense for Bustos, who also holds the Argentina lightweight title. After winning the vacant belt in a match against Ana Laura Esteche, she won a decision over Roxana Beatriz Laborde which was followed by a six round non-title decision loss to Aguirre. Aguirre had also scored a six round win in May of 2013 and was unbeaten in her last eight fights.

Aguirre’s irregular style: low hands, wide looping punches, and a stance that constantly switched from orthodox to southpaw, didn’t help much when the fight was underway. The champion fought behind a high defense and outworked the challenger each round. Despite being on the losing end of the contest, there was quite a bit of posing from Aguirre even after a perfectly timed counter right hand from Bustos dropped her in the opening frame. The champ stayed on point and fought a disciplined fight save a few moments towards the end where she briefly stood toe to toe to exchange shots.

The interim WBA super flyweight champion Linda Laura Lecca (11-2-1, 3 KO’s) defended the title against Guadalupe Martinez (7-7) in Huarochirí, Peru. This was the first defense for Lecca, who won the title in May following a vacant WBA Fedelatin super flyweight title win in her prior bout. Lecca took a unanimous decision over 10 rounds to give Martinez her fifth failed try in world title opportunities.

In Caracas, Venezuela, Mayerlin Rivas (10-3-1, 7 KO’s) and Arely Valente (12-2-1, 6 KO’s) met for the interim WBA bantamweight title. Rivas, who had failed in two prior world title contests, had fought just once since 2012: a six round win over Liliana Martinez in May. Valente was coming up from flyweight where she held the WBC Youth title. Rivas came out the victor, scoring her first stoppage win in over three years to win the title via ninth round TKO. It was also her first win in a scheduled 10 round bout.