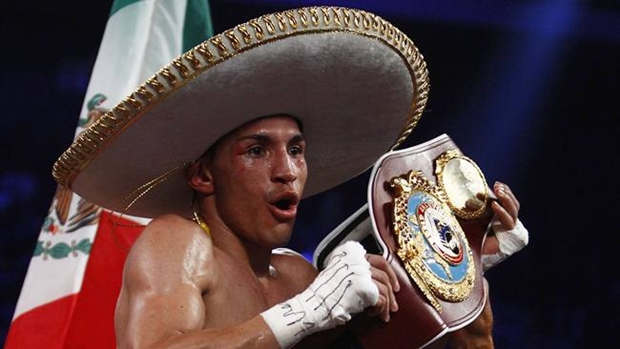 One of the sport’s most underrated and underappreciated talents is 24-year-old two-belt flyweight champ, Juan Francisco Estrada (26-2, 19 KOs).

Since winning the WBA and WBO belts from Brian Viloria in 2013, the native of Hermosillo, Sonora, Mexico has proven his world class status with one-sided successful defenses against tough Filipinos Milan Melindo and Richie Mepranum.

Now, for his third defense on September 6 at the Arena in Mexico City, Estrada will be taking on countryman and former junior flyweight world titlist, Giovani “Aztec Warrior” Segura (32-3-1, 28 KOs), widely regarded as one of the heavier punchers south of featherweight.

So much has been made of Segura’s power and aggressive nature during the lead-in to this fight that the defending champ feels buried in the hype.

“I don’t know why they still don’t have confidence in me,” Estrada lamented in the Mexican media. “Since they announced the fight, all I’ve been hearing is how dangerous he is, how hard he punches, and how he throws a thousand punches. But he could throw eight thousand punches if he wants—I don’t think they’ll land.”

Estrada, despite not getting a whole lot of mic time, gives a mouthful whenever he does get a chance to speak.

Estrada-Segura, coming just one day after the Akira Yaegashi-Roman “Chocolatito” Gonzalez flyweight title clash in Tokyo, seems to be part of what could be a golden era in the flyweight division. However, “El Gallo,” is making it clear that he will emerge victorious when the 112 lb. dust settles.

“I know I’m the best in my division and I’m going to prove it. Giovani is the first on my list and then I’m going after “Chocolatito” Gonzalez (who beat him via unanimous decision in 2012). I want to be the champion of each of the four sanctioning bodies and I’m already halfway there.”

With names such as Brian Viloria, Edgar Sosa, Juan Carlos Reveco, “Tyson” Marquez, and Kazuto Ioka floating around the division, as well as the winner of the Yaegashi-Gonzalez showdown, Estrada will have his chance to prove his greatness to the world. But first, of course, he has to go through Segura.