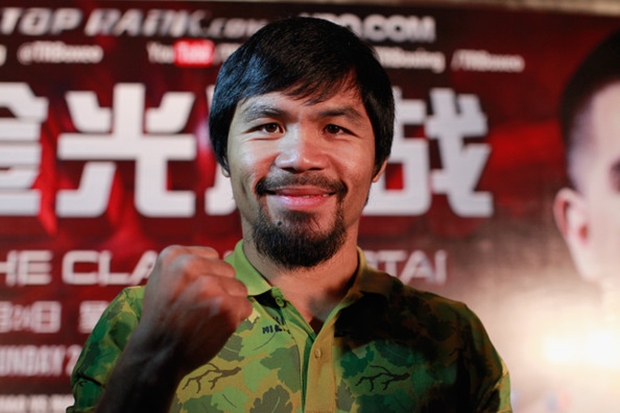 Although the two best fighters of this era are not any closer to facing one another in the ring, the rivalry and thinly-veiled animosity is still there, forged after about four years of a back-and-forth barrage of accusations regarding who is to blame for the nixed mega-bout.

And while Floyd Mayweather dismisses his Filipino challenger and has seemingly forever moved on to other things, Manny Pacquiao is still addressing the issue in public– forced into speaking about Mayweather by reporters in ever city at every press event.

In recent days, though, Pacquiao has become more philosophical about Mayweather and the inability to make the BIG one.

“Why he will not fight me?” Pacquiao offered up, anticipating Jerry Izenberg’s question in a recent interview for the Star Ledger. “Well, I think he is worried about his (undefeated) record. He talks about his zero losses. The zero that means so much to him means nothing when measured against who he fought.

“You talk pound-for-pound best, or undefeated champion. If you don’t defend against the best, none of that means anything.”

Asked if he thought Mayweather was afraid of him, Pacquiao answered as if he had given this much thought.

“Not of fighting,” Pacquiao said, “but perhaps of what one night could do to his zero of losses. I think I finally understand him:…what he says,…how he acts,…and I don’t like it. But what l learned and heard from him, well, I realize why he is like that. I understand sometimes when the people are not educated they just talk to talk. He sets a very bad example.”

Although tensions may be easing in the Top Rank-Golden Boy “Cold War,” there’s zero indication that fans are any closer to Pacquiao-Mayweather, despite promoter Bob Arum’s claims that the bout’s likely to happen next year (Arum seems to make similar claims prior to every Pacquiao fight these days).

Both sides of the Pacquiao-Mayweather dispute have done plenty to nix the sport’s biggest fight. Neither side can claim moral victory after four years of stalling, stonewalling, and fake posturing. So, for now, the closest fans will get to the real deal is the occasional online jab.