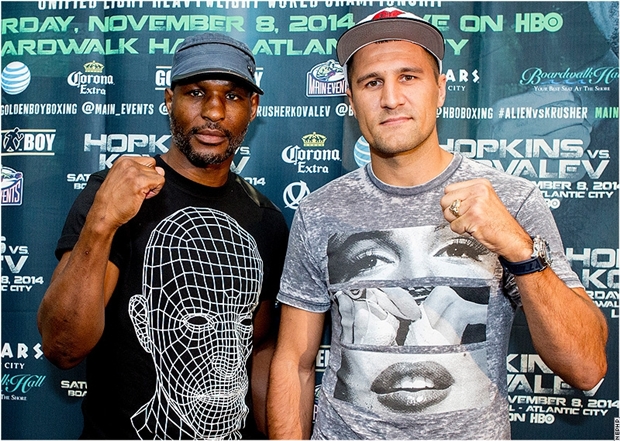 There’s this macho notion that, in boxing, the good guys go after all the toughest fights at all costs in the noble pursuit of proving themselves the best while the villains cower in corners and look to cherry-pick their way to stardom.

The reality is that everyone in boxing, especially at the elite level, is a tough guy and that every main stage star is also looking for the “right” bout that would offer the right reward for an appropriate level of risk.

In some cases, though, fighters are forced into tough fights– even elite fighters– because there’s simply nowhere else to go. This is the case with both Bernard Hopkins and Sergey Kovalev, two fighters who find themselves backed into a corner, but for very different reasons.

Hopkins, the 49-year-old wonder and current IBF/WBA light heavyweight champ is a darling with the hardcore fans and media, but is still not the type of draw who could perpetually dip into the second tier of contenders and put together a marketable, salable event. For Hopkins, there are no easy marks from this point forward.

Having just done away with the two weakest champions in the division, Tavoris Cloud and Beibut Shumenov, there’s nowhere to go now but forward at the two strongest champs. And on November 8, to verify this point, he’ll be meeting WBO champ Sergey Kovalev.

Not to burst too many bubbles, but much of what Hopkins has been doing in recent years is based on smart opponent selection and a reliance on his genius-level grasp of boxing fundamentals. These two factors have allowed a Hopkins, who has shown obvious signs of slowing down– even in victory, to keep winning and keep defying what passes for boxing common sense these days.

But the Hopkins bandwagon has reached the intersection of put up or shut up and, as opposed to match-ups in the past, he will have to apply his guile and craft to subjects not so tailor made for his particular brand of sleight of hand.

If anyone can do this, Hopkins can, but Kovalev is a real and legitimate threat. He’s not an opponent who will be juked into a paralyzed pause by simple footwork. Kovalev is fearless and supremely focused in the ring. He’s as close to a machine as one can get and still bleed human blood.

Russia’s Kovalev is also a fighter pushed into a corner and forced at Hopkins just as Hopkins is forced at him.

In order to reach that next level of stardom, Kovalev has to establish his name among the casual fans of the sport, who make up a great deal of the buying public. He’s gone as far as he can by beating up fringe contenders and former champs. In order for Kovalev to keep public interest alive and keep building his name, he desperately needs marquee fights from this point forward.

Both Hopkins and Kovalev counted on WBC champ Adonis Stevenson at one point to provide that elite-level competition, but the Haiti-born Canadian slugger has set about on some questionable business practices, ambivalent towards making big ticket fights and/or pricing himself out of deals that should be no-brainers. As a result, while Hopkins and Kovalev are facing each other in a legacy defining light heavyweight showdown, Stevenson has nothing on the immediate horizon and is rumored to be entertaining the idea of facing former titlist Gabriel Campillo at some point in the future.

Boxing politics and the confusing mishmosh feud involving Oscar De la Hoya, Al Haymon, and Showtime brought Hopkins and Kovalev together for this particular bout on HBO, but neither fighter was looking for an easy out, anyway.

Both fighters are still very much captive to the whims of the consumer. Neither can rest on his laurels. In a lot of ways, this is how boxing should be– especially when we see the sport’s few true superstars bilk the public repeatedly with soft touches disguised as main stage events.