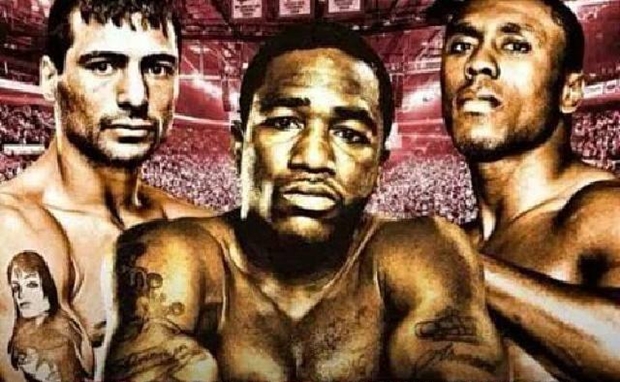 On Saturday, September 6, Showtime will be televising a triple-header featuring Adrien Broner, Lucas Matthysse, and Andre Berto in separate bouts held at the U.S. Bank Arena in Cincinnati, Ohio. All three fighters are looking to fight their way back from tough losses and stalled career momentum.

And while all three contests are designed to be challenges just tough enough to provide showcase wins, there is still plenty of intrigue involved in the evening. Who can come back and pick up where he left off? Who will collapse under the pressure of regaining lost ground? Who has been changed forever by humbling defeat?

With that in mind, here’s a look at the three headliners, what brought them here, and where they may be going:

The fall of boxing’s most hated bad guy was a cause for celebration throughout boxing’s internet cyber world.

For two full years, the 20-something heel from Cincinnati touched on every “do not” point on the “How to make boxing fans” checklist. Fast –tracked to three world titles in three different weight classes, Broner (28-1, 22 KOs) mugged to every camera he could find and produced a series of sleazy and/or dumb videos that had the fighter doing everything from flushing twenty dollar bills down the toilet to delivering a sermon on the toilet at a Popeye’s chicken to performing oral sex , mid-stage, on a stripper.

Broner did manage to deliver some compelling performances in the ring and showed enough ability so that many were willing to overlook his obnoxious Mayweather-light routine and give him recognition as one of the best young fighters in the game.

But when he began to fail to deliver in the ring, it became easy to bury “Baby Bro.”

The decisive and embarrassing loss to heavy-hitting Argentine, Marcos Maidana in December of 2013 opened the flood gates of derision and even fence-sitters got in on the public flogging of a once highly-regarded superstar-in-the-making.

The post-Maidana Broner seems to be an empty vessel. No longer “Must See TV” as an exciting young fighter, Broner now generates morbid curiosity from those looking to see the last nail hammered into his professional coffin.

A tepid, dull decision win over fall guy Carlos Molina on the Mayweather-Maidana I undercard in May did nothing to rebuild his brand and it’s going to be hard to look good against a quick and solid Emmanuel Taylor (18-2, 12 KOs) this Saturday as well.

Taylor, who has likely reached his high water mark as a high second tier-level fighter, is just good enough to shock Broner if “The Problem” is having any problems with focus. At the very least, Taylor is good enough to make the comeback-minded Cincinnati kid look pretty bad in victory.

This makes Saturday’s bout at the U.S. Bank Arena especially tricky for the former three-division champ. Broner is going to have to work hard and be sharp, not only to win, but to look good in victory. Anything less than an impressive win will likely dim his fading star even more.

What happens to a “machine” proven to be more man than mechanism? In boxing, many times these all-offense, opponent-devouring fighters simply turn to mush. With their aura diminished and the intimidation factor gone, what’s left is just a very good offensive fighter with a previously-published guide to shutting him down.

Argentina’s Matthysse (35-3, 33 KOs) may or may not be in that spot now, just about a year after a tough, but decisive decision loss to Danny Garcia and a tougher-than-expected KO 11 win over John Molina in April.

On the surface, Matthysse looks to be the same man who earned his way to the top of the junior welterweight division with blow-out wins over the likes of Lamont Peterson, Humberto Soto, and Olusegun Ajose. But there were moments in the Molina fight where Matthysse appeared to be taking a more measured approach, probing at a potential weakness when, previously, he would dig in like a jackhammer.

We probably won’t get a definitive answer Saturday night against a likely overmatched Roberto Ortiz (31-0-1, 24 KOs), who is really little more than a hard-punching Mexican club fighter at this point, despite his undefeated record and his standing as owner of the dubious WBC silver junior welterweight belt since 2011.

A Lucas Matthysse at or near 100% should stop Ortiz inside of six rounds in a brutal and ugly mess of a bout. But, with defanged beasts, there’s always the chance of a gloriously ugly collapse.

For the longest time, the boxing intelligentsia was blaming Berto (28-3, 22 KOs) for all of boxing’s ills, as if the Haitian-American welterweight were the first young fighter ever built via soft touches and marketing into a paper champion with plenty of TV time. When he got beat up, dropped, and defeated by Victor Ortiz in a 2011 Fight of the Year candidate, the self-proclaimed experts wet themselves in unison. Brutal back to back loses to Robert Guerrero and Jesus Soto Karass in 2012 and 2013, respectively, seemed to signal the end for the 30-year-old former WBC and IBF world titlist.

It was a fall from grace that many had hoped for and, frankly, there was way too much glee taken in the possible ending of a young man’s livelihood.

Looking back, if Berto’s career had stopped at the Soto Karass TKO 12 loss, Berto’s legacy would be that of a two-time world titlist with a 7-2 record in world title bouts and four absolutely thrilling all-action wars (vs. Luis Collazo, Ortiz, Guerrero, and Soto Karass). Hardly the resume of an all-time great, but certainly more respectable than the laughingstock some in the media tried to make him out to be.

But Berto is not done with his career. Following shoulder surgery and a thirteen month absence from the ring, the former titlist is making his return on the same September 6 card as Broner and Matthysse against light-hitting relative no-hoper, Steve Upsher Chambers (24-3-1, 6 KOs), who is on a two-fight losing streak and will also be returning to the ring after a lengthy ring absence (one year).

Obviously, this bout is designed to give Berto an impressive win. Expect a couple more tune-ups for the former champ. From there, it’s either sink or swim in the deep waters of the welterweight divisions. At the very least, despite the attacks of his dedicated critics, Berto has earned the right to get back into the mix.