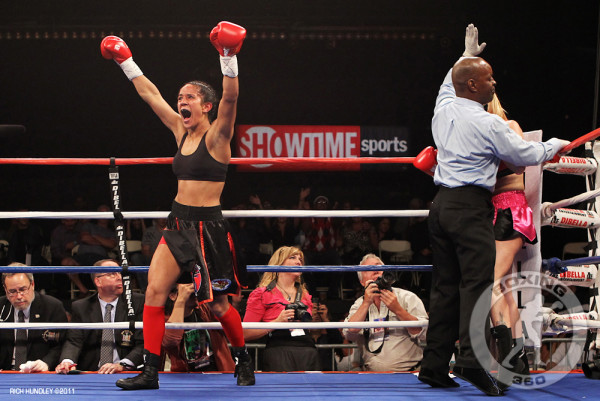 Newly crowned WBO lightweight champion Amanda “The Real Deal” Serrano (21-1-1, 16 KO’s) isn’t wasting any time. The Brooklyn resident will make the first defense of her title on September 18th against Plattsburgh’s Jackie Trivilino (9-8-3, 1 KO). The bout will be the headlining attraction on Dmitriy Salita’s Star of David Promotions at the Master Theater in Brighton Beach, Brooklyn.

Just over two weeks ago, Serrano scored a sixth round stoppage of then title holder Maria Elena Maderna in Argentina. It was her seventh straight knockout victory and earned her the fourth world title of her career; she’s also held the WIBA and UBF featherweight belts as well as the IBF super featherweight title. Her lone defeat came in 2012 against Frida Wallberg in Sweden when she challenged for the WBC female super featherweight title.

Jackie Trivilino is coming off a tough loss to Heather Hardy this past June. Giving Hardy all she could handle at the Barclays Center, many felt she was robbed when she lost a technical seventh round split decision by a one point margin. While she’s never held a title, she has challenged for both the New York State and world featherweight belts and has met up with other eventual title holders along the way. In her eight losses, she’s only been stopped on one occasion.
This is the second time the two fighters are facing one another; in 2009 Serrano won a four round decision in a contest where both women were making their professional debuts.