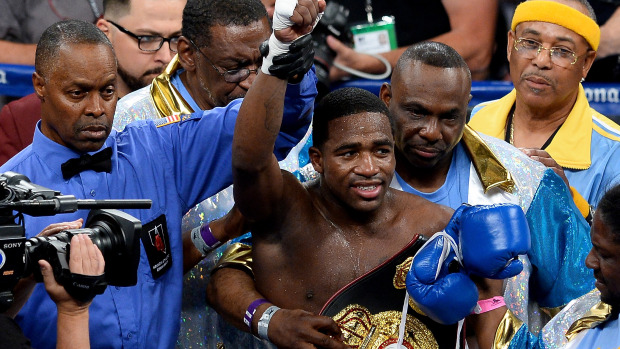 The underdog Taylor seemed hell-bent on overachieving as he pressed the attack and forced his former three-division world champ opponent to fight just about ever moment of every round. And, for the most part, Broner responded, letting his hands go and peppering Taylor with big and small shots alike to keep up with the pace.

Ultimately, though, the fight came down to Broner’s huge advantage in raw talent as the favorite ended the fight with a slight edge all around made greater by his final seconds left hook knockdown.

After the bout, Broner called out Lucas Matthysse, repeating the challenge he had been issuing throughout the lead-in to this bout.

After a round and a half of close action, Matthysse landed a brutal left hook to Ortiz’s liver, dropping the previously undefeated Mexican. Ortiz remained on one knee, observed referee Benjy Esteves’ count, but was counted out despite clearly beating the ten count by at least a half-second. After the bout, Esteves refused to comment on the controversial stoppage.

Matthysse would challenge Danny Garcia to a world title rematch in the post-fight interview, ignoring the mention of a possible Broner bout.

The televised opener, as expected, was little more than a one-sided showcase for Andre Berto (29-3, 22 KOs) as he battered Steve Upsher Chambers (24-4-1, 6 KOs) from pillar to post for a full ten rounds before receiving three judges’ scores of 99-91.

Berto, who had been off for fourteen months following back-to-back high profile losses and shoulder surgery, looked rusty and sloppy at points, but Chambers, who, himself, was coming off a thirteen-month layoff, was not able to take advantage of Berto’s weaknesses with any real consistency. The end result was a bout where Berto pretty much did as he pleased while a reluctant Chambers held his ground, but not much else.