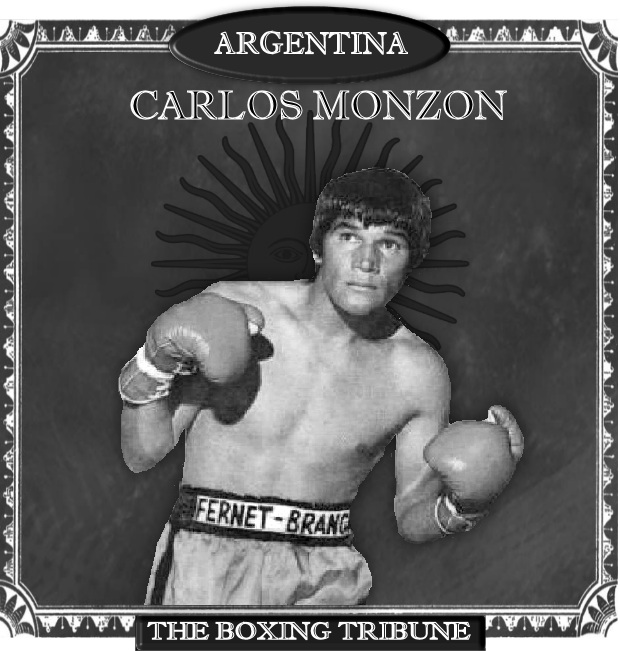 Few would argue that Carlos Monzon was Argentina’s greatest boxer ever. His career was so impressive that many consider him to be the greatest middleweight of all time. Brought up in abject poverty, Monzon honed himself into a near flawless fighting machine.He was a complete fighter, able to both box and brawl, with a great chin, and deadly punch, but also with excellent technical skills and a razor sharp tactical mind. Monzon could look ordinary at times during fights, but then he would come alive and destroy his opponent. He had an unique manner of controlling what happened inside the ring and dismantling the man in front of him.

Success did not come easily for Monzon, as he had to slog for over seven years in Argentina before finally being granted a world middleweight title shot. When he finally got his chance on November 7, 1970, the still relatively unknown Monzon caused a huge stir when he dethroned the favoured Nino Benvenuti with a 12th round knockout. As world champion, Monzon was imperious, making 14 defences over the next seven years, and winning them all. Monzon turned back the challenges of men such as Emile Griffith (twice), Jose Napoles, Tony Licata, Bennie Briscoe, Jean-Claude Bouttier (twice), and Rodrigo Valdez (twice).

Monzon announced his retirement on August 29, 1977, aged 35, one month after making his 14th and final defence of his world title, with a point’s victory over Rodrigo Valdez.
Monzon retired having been undefeated in the last 13 years of his career and going 73-0-9 in his last 82 contests.

Unfortunately, the man who had complete control inside the four ropes of a ring was an unpredictable Jekyll and Hyde character, prone to dark mood swings and outbursts of violence. Without the discipline and purpose of boxing, Monzon’s life soon began to spiral out of control after his retirement.

In 1989, he was jailed for the homicide of his common law wife Alicia Muniz and sentenced to 11 years. On January 8, 1995, Monzon died in a car crash while on a Furlough from prison. When he was buried, his funeral brought Argentina to a standstill, just as his world title fights did almost two decades earlier.