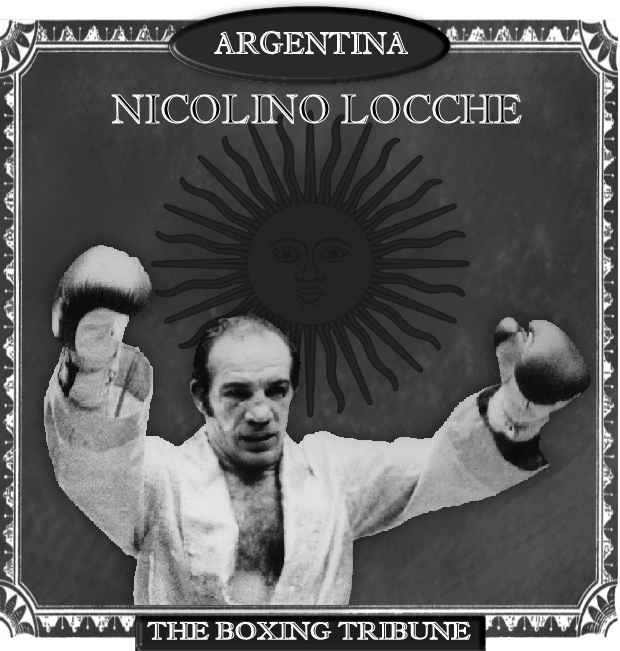 Nicolino Locche was a wizard of the ring, even his appearance was a trick. To look at Locche, you could be fooled into thinking that he was the stereotypical Argentine fighter, with his wide shoulders and barrel chest Locche looked like a rugged slugger.
In fact, Locche was a defensive master; a genius of close quarter escape in the ring. While many defensive boxers use the ring and fight on the retreat, Locche was rarely out of range of his opponent’s punches. Or so it would seem.

Locche possessed that uncanny defensive ’radar’ allied with extraordinary reflexes that would allow him to stand right in front of opponents, and avoid punches with the slightest move of his head. He could also deftly pick off punches with his gloves and arms, but often chose to stand with his arms at his sides and avoid the punches coming his way, with a bend of the waist and bob of the head. Locche seemed almost comical at times, with his quirky mannerisms and off beat defensive tricks, but his opponents were seldom laughing after a few rounds in the ring with him.

Although renowned for his stamina, Locche was a heavy smoker and would even puff away between rounds during fights.

His nickname of “El Intocable” or “The Untouchable” was no joke.

Locche turned professional in 1958, after an amateur career that saw him build a 117-5 record. By the early 60s, Locche had already worked his way into contention for the world lightweight title. Despite a number of impressive victories, including holding Carlos Ortiz to a draw when Ortiz was world lightweight champion, and out-pointing Sandro Lopopolo while Lopopolo was the reigning world light-welterweight champion, Locche would have to wait until 1968 before he would finally be granted a world title shot. After a decade of waiting, Locche took his chance happily, stopping Paul Fujii in 10 rounds to win the World lightwelterweight title.

El Intocable made five successful defences of his crown, including a masterful performance against future champion, Antonio Cervantes, where he won every round of the judges score cards. In March 1972, Locche lost the world title to Alfonso “Peppermint’ Frazer,” on points. One year later, he tried to regain his title from Antonio Cervantes (who had taken the title away from Frazer) but was stopped on a badly cut eye in 9 rounds. That was Locche’s final world title fight, yet, this little wizard still had enough tricks left to win his last seven contests, before retiring in 1976, with a final record of (117-4-14, 14 KOs)

As seen by his record of only 14 career stoppages, Locche was no knockout artist, but who needs knockouts when you have magic.

Prev8 of 11Next
Use your ← → (arrow) keys to browse
Peter Silkov