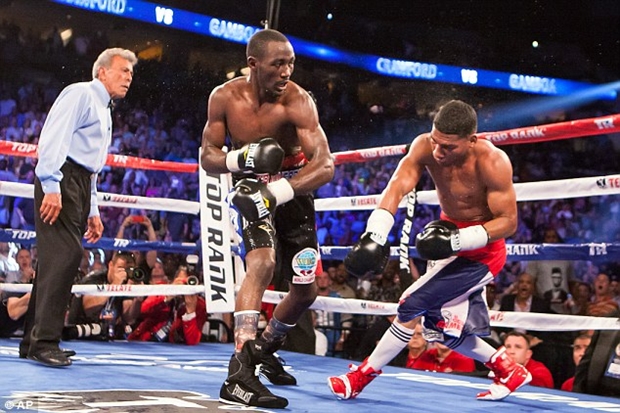 On November 29, WBO lightweight champ, Terence Crawford (24-0, 17 KOs) will once again fight in front of a madly partisan crowd at the CenturyLink Center in his home town of Omaha, Nebraska.

In June, the classy boxer-puncher disassembled well-regarded Cuban star, Yuriorkis Gamboa to the delight of 10,000 screaming fans before closing the show in the ninth round. This time, Crawford will be taking on the tough former world title challenger Ray Beltran (29-6-1, 17 KOs) in what will be the second defense of his belt, but also his third high-profile bout in a year that began with him easily dethroning  reigning champ Ricky Burns in Burns’ native Scotland.

With HBO support for the Gamboa fight and a solid A+ reputation among hardcore fight fans and media, it’s hard to understand why a bigger deal isn’t being made of Crawford’s run this year.

Being in a fairly thin division maybe plays a part, but Crawford has been fighting top shelf opposition without seeking the comfort of soft touches since he began to make a name for himself. Even Beltran, despite six career losses, is a legitimate top 5 lightweight who, by all accounts, should’ve taken the victory over Ricky Burns when the two fought in September of 2013.

Assuming Crawford gets by Beltran this November, there will likely be a push for the undefeated 26-year-old to move up to the much deeper junior welterweight division. Crawford, as a Top Rank fighter, will not likely get a crack at the IBF lightweight title, which is to be contested this coming Saturday in a bout between two Al Haymon-advised fighters, champ Miguel Vazquez and challenger, Mickey Bey. The WBC titlist, Omar Figueroa, may be similarly out of reach as a Golden Boy/Al Haymon fighter.

The reality is that Crawford could possibly handle both Vazquez and Figueroa handily and cement his status as the undisputed top 135 pounder in the world. Boxing politics, however, will stand in Crawford’s way from earning his proper standing at lightweight. And, if things stay the same in this boxing “Cold War,” he’ll find the same blocked paths in the higher weight class, where many of the division’s top stars are aligned with the oft-mentioned Haymon.

These obstacles are, sadly, part of the game these days and should be expected. It’s harder to understand what’s standing in the way of him getting the kind of full credit that comes with a Fighter of the Year-type year. The affable fighter from Omaha is for real and he’s proven it, plus he’s fun to watch.

Crawford may keep winning in impressive fashion against the best available opposition, but his sternest test may be in capturing the support of an often fickle boxing public.