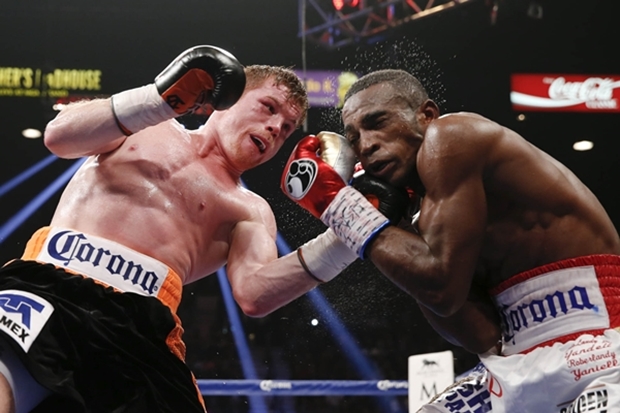 Although it’s still only mid-September, time is running out on Saul “Canelo” Alvarez and his search for the perfect opponent for his December 6 return to the ring—especially if he wants to be in competition for the prestigious Fighter of the Year award.

Having already beaten Alfredo Angulo and Erislandy Lara this year, Alvarez’s ideal third opponent of 2014 should be someone with name recognition, who is ranked in someone’s top 10 and considered a legitimate test for the 24-year-old Mexican star. The problem is that as time advances, the pool of prospective foes is beginning to dry out as fighters lock in their plans for the rest of the year.

Another issue is whether the red-headed battler from Guadalajara will compete on HBO or Showtime now that Golden Boy founder, Oscar De la Hoya has mended fences with HBO.

“We’ve been doing all our business with Showtime since a few years ago when we were kicked out from HBO,” De La Hoya said in an article published on My Top Sportsbooks. “Yes, we are doing this fight with Hopkins on HBO and it’s a great way to start a relationship again, but I also have to take a look the relationship we have with Showtime. It’s a very difficult spot, but I am going to do what is best for Canelo’s career.”

As of right now, Miguel Cotto has already announced his plans to sit out the rest of the year and WBO junior middleweight titlist Demetrius Andrade has petitioned the WBO for a shot at the vacant WBO middleweight title. Rumored front runner, James Kirkland, is now being mentioned as a possible undercard attraction on the Bernard Hopkins-Sergey Kovalev broadcast.

Of the remaining options, former welterweight champ Joshua Clottey is now the favorite to get the opponent slot for December 6, but that would likely mean a lower-profile bout for a lower overall payday against the shopworn fighter from Ghana.

Surprises are still possible and a major showdown can still be booked, but time is running out on Team Canelo if their goal is to close out the year with a real bang.