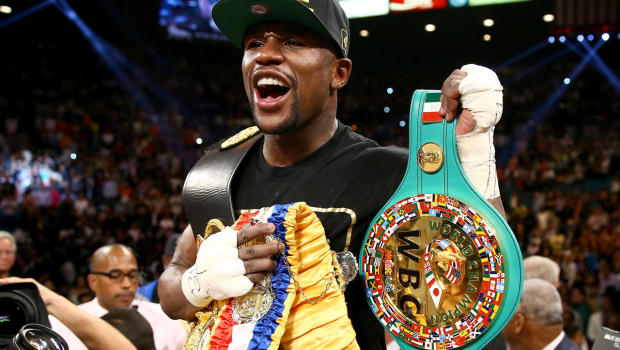 Looking to move and keep the fight in the middle of the ring, Mayweather swept the first three rounds, landing some crisp counters against a frequently off-balance Maidana.

A huge right hand from Maidana at the very end of the third round buzzed Mayweather, stiffened his legs, and led to the Argentine’s best round of the fight.

However, Mayweather took control once again in the fifth and would never let go until giving away the twelfth and final round on the assumption that he was well ahead on the cards.

In the eighth round, a small controversy erupted as Mayweather claimed that Maidana bit his left hand while tangled up in the middle of the ring. Referee Kenny Bayless did the best he could under the circumstances, with no visual evidence of the bite, and warned Maidana to keep it clean. Replays were somewhat inconclusive as to whether Maidana did or didn’t bite Mayweather, but all circumstantial evidence pointed to “yes.”

In the tenth round, Bayless would deduct a point from Maidana for shoving Mayweather to the ground, but, overall, the fight was certainly cleaner than it could’ve been given both fighters’ styles and the heated nature of the contest.

After twelve rounds, the decision was a foregone conclusion, although much closer on the judges’ official scorecards than on The Boxing Tribune’s 118-109 unofficial card. The bout goes into the record books as a unanimous decision victory for Mayweather by scores of 115-112, 116-111, and 116-111.

— James De la Rosa (23-2, 13 KOs) battered Alfredo Angulo (22-5, 18 KOs) for eight full rounds in a ten round middleweight bout, dropping his opponent in the second, before beginning to fall apart a bit in the ninth. Unfortunately for Angulo, his late rounds surge was too little, too late and, despite winning rounds nine and ten at the desperate urging of trainer Virgil Hunter (and hurting De la Rosa on a couple of occasions), he would lose clearly and decisively via unanimous decision by scores of 98-90, 96-92, and 99-89.

On the pre-PPV Showtime “Countdown Live” show, veteran Humberto Soto (65-8-2, 35 KOs) won via unanimous decision in an entertaining ten-round junior welterweight bout against John Molina (27-5, 22 KOs) by scores of 96-91, 95-92, and 95-92. Molina had a point deducted in both rounds six and seven for low blows and Soto, in turn, had a point deducted for low blows in the tenth.