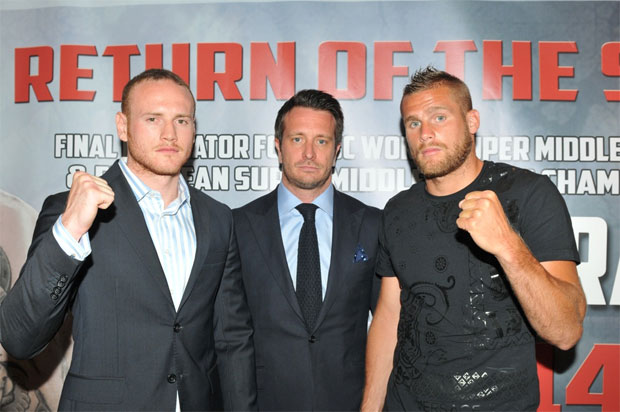 This Saturday (September 20) George ’The Saint’ Groves (19-2-0, 15 KOs) returns to the ring for the first time since his knockout defeat at the hands of IBF and WBA world super middleweight champion Carl Froch, last May, at London’s Wembley Stadium. The loss to Froch was the second defeat in a row for Groves, following a controversial stoppage defeat to ’The Cobra’ in their first encounter, last November. Both contests were classic confrontations, which captured the public’s imagination, with the second fight proving to be England’s richest boxing show ever, and boasting a record live crowd of over 80,000 people. Now Groves returns to competitive action, against France’s Christopher Rebrasse, in a match that it is almost infinitely more low key than the two Froch encounters, yet at the same time just as vitally important to The Saint’s long term career plans.

Groves will be challenging Rebrasse (22-2-3, 6 KOs) for the Frenchman’s European super-middleweight title, at London’s Wembley Arena, with the fight doubling as a WBC eliminator, for the right to challenge new WBC world super-middleweight titlist Anthony Dirrell, who recently won the belt from Sakio Bika, in an extremely scrappy,but forgettable encounter.

Although he lost both fights with Carl Froch, George Groves nevertheless proved himself to be a genuine world class boxer, and on that form would not seem to have anything to fear from Dirrell, whose main attribute seems to be his awkwardness more than anything else. Yet before he can think of Dirrell, ‘The Saint’ has to first get past Rebrasse. Many fighters in the past have tripped up upon similarly innocuous assignments, and seen their future plans crumble into dust in the process.

Rebrasse has been European champion since March, when he stopped Mouhamed Ali Ndiaye in 4 rounds, and looks to be a good all round boxer, yet not exceptional at any particular way. Rebrasse also has only six stoppages on his record, so would not seem to be the kind of puncher who might be able to test Groves’ chin.

Everything in this fight seems to point towards a comfortable Groves victory, which will in turn set him up for another world title shot, this time at Dirrell’s WBC bauble.

However, coming back from defeats can be a tricky business, especially knockout stoppages of the kind which Groves suffered at the right hand of Froch. Sometimes the damage, often more psychological than physical, only shows itself when the fighter returns to the ring competitively. Also, for all the ability which he showed in his two wars with Froch, there remains some doubt about his durability at the highest level. This doubt is perhaps the only visible weakness in Groves’ pugilistic make up. While Rebrasse would not seem to have the power to test this supposed flaw in ‘The Saint’s armoury, it will still be interesting to see whether Groves is in any way hesitant when under fire. The Frenchman, despite his lack of power, is a busy boxer who fights at a good pace and throws a lot of punches. His best chance of success seems to be to try and pressure Groves with his pace and test his stamina down the stretch.

Groves does not seem to be the kind of person who struggles with inner doubts, and the two defeats in a row for him against Froch could be seen as learning experiences rather than career damaging setbacks. Yet even Groves can not be 100% sure within himself that the defeats have left no negative mark upon him, until the moment he returns to competitive action.

Despite being the challenger in this fight, the pressure would seem to be all upon Groves on Saturday. Victory will allow him to bounce right back into world title contention, with a future win over Dirrell even holding the promise of a possible third installment in his rivalry with Carl Froch. Defeat however, would drop Groves back down amongst the also-rans, and almost certainly put paid to any further world title shots within the near future.

However, barring any residual hangover from the Froch fights, Saturday night should see a triumphant return of ‘The Saint’. Boxing is all about levels, and George Groves is a better fighter than Christopher Rebrasse on just about every level. Boxing technique, speed, power, and experience. This match is really a good European level boxer in Rebrasse, taking on a genuine world class boxer, in Groves.

‘The Saint’ should have too much speed and power for Rebrasse, and victory should come via late stoppage or a points triumph. Groves may not look at his most spectacular or confident, but this contest is above all about getting the win, and putting some distance between himself and the knockout defeat to Froch last May.

It is ironic that Groves will be making his return against Rebrasse at Wembley Arena, that stands in the shadows of Wembley Stadium, the site where Groves fought Froch for so much more than just a world title. Victory on Saturday will give Groves the hope that the glory which he had such a brief taste of against ’The Cobra’ can perhaps be rekindled and recaptured, and finally grasped fully. Yet defeat to Rebrasse might put the chances of such renewed glory out of ‘The Saints’ reach for good.

Such is the fickle nature of boxing.

The Saint needs a win. Otherwise, there may be no more returns.