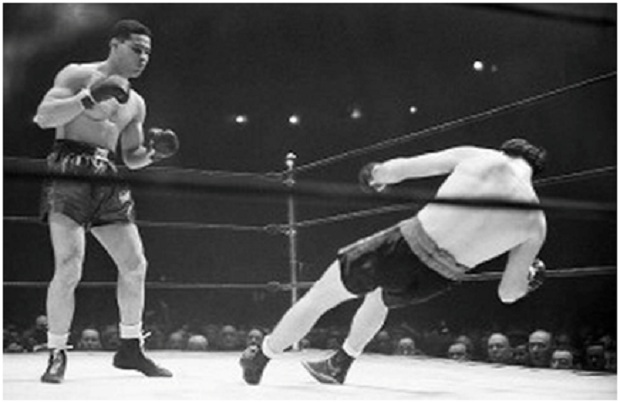 The Closers: Part One

“He can run but he can’t hide.”—Joe Louis

As mentioned in Part Two, others who had a knack for throwing caution to the wind and going in for the kill were Carlos Zarate, Wilfredo Gomez, Thomas Hearns, Marvelous Marvin Hagler, and Pipino Cuevas. Their victims often paid dearly; broken noses, broken eye sockets and broken jaws sometimes resulted when these Discovery Channel types finished their work. While few could match the great Thai champion Khaosai Galaxy, Bob Satterfield, Earnie Shavers, Nigel Benn, Lucia Rijker, Lala Ali, and Andy Ganigan could stun and close with the best.

“Those guys I fought were not bums. They were hardworking professionals trying to make a dollar, too. I knew the training they went through, and I knew the dreams they had. No different from me.”—Joe Louis

“Joe Louis, to me, was the finest human being God put on this earth in every way.” — Angelo Dundee

Joe Louis, “The Brown Bomber,” is rated by many as the greatest heavyweight boxer of all time. He successfully defended his title 25 times. Joe used a lightening quick jab and was subtly lethal with one-punch KO power in either hand. He was very economical; he never wasted a punch, nor did he waste much foot movement, moving only as much as needed but always within deadly reach of his opponent. Once he stunned his opponent, he ended matters quickly and mercifully and he would then simply turn around and head quietly to his corner knowing that he would not have to fight again that night. The entire scene was noirish, if not magical. See: https://www.youtube.com/watch?v=6sv1ph-Ecf0

Joe was everyone’s hero and fans were amazed at how much power he could generate with such a short punch and just how fast he threw that punch. Because of his short punches and combos, only aficionados and Louis victims really knew how quick his hands were. But the thing is, he “invented” the one-two.

His frightening demolition of Johny Paycheck (38-3-2 coming in) on March 29, 1940 at the Garden demonstrated Joe’s ability to end matters once his opponent was hurt. See: http://www.boxing.com/giving_johnny_paychek_his_due.html

Louis fought the very best including Ezzard Charles, Jersey Joe Walcott, Max Schmeling, Max Baer, Buddy Baer, and Billy Conn. In 1950, hounded by the IRS, he returned to the ring, but after a series of wins, he was knocked out in 1951 by a prime and motivated Rocky Marciano, after which he permanently retired.

When he lost to Rocky Marciano, many wept, for Joe had transcended the sport and was viewed as America’s fighter. Joe Louis was neither brown nor white; he was simply the most beloved champion in boxing history.

“I was privileged and will always be grateful to have had Joe Louis as my friend. The son of an Alabama sharecropper, Joe Louis fought his way to the top of professional boxing and into the hearts of millions of Americans. Out of the ring, he was a considerate and soft-spoken man; inside the ring, his courage, strength, and consummate skill wrote a unique and unforgettable chapter in sports history. But Joe Louis was more than a sports legend – his career was an indictment of racial bigotry and a source of pride and inspiration to millions of white and black people around the world.”—President Ronald Reagan (April 13, 1981)

Watch for the fourth and final installment.