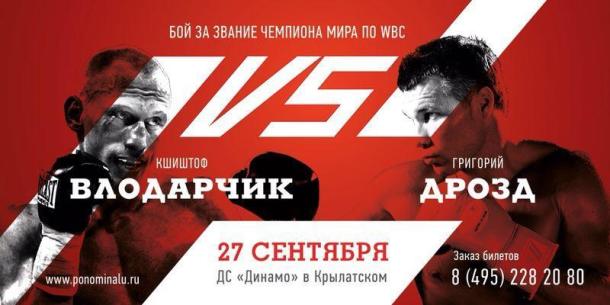 It was dominant performance by the new champion, who out-boxed the four and a half year title holder at every turn, allowing him to win just two rounds one card, and one round on the other two.  Scoring a knockdown in the eighth frame, he landed at will, almost to the point that it appeared as if Wlodarczyk was standing still at times.  Final scores were 118-109, and 119-108 twice.

The loss ends a seven championship fight winning streak for Wlodarczyk, who was coming in off an eighth round stoppage of Rakhim Chakhkiev and a sixth round stoppage over Giacobbe Fragomeni in the pairs third contest.

This is the first world title for Drozd, who entered the bout as the EBU cruiserweight title holder and a former WBA International, WBO and WBC Asia Pacific, and PABA cruiserweight champ.  It also extends his win streak to 14, the defeat coming against Firat Arslan in 2006.

In the night co-feature bout, Denis Lebedev (26-2, 20 KOs), blasted out Pawel Kolodziej (33-1, 18 KOs) in two rounds to regain the WBA World cruiserweight title.  Kolodziej’s attempts to outbox the champion failed miserably, as a straight left from Lebedev floored him in the second round.  Beating the count, albeit glassy eyed, referee Guillermo Perez waved off the action at the :41 mark.