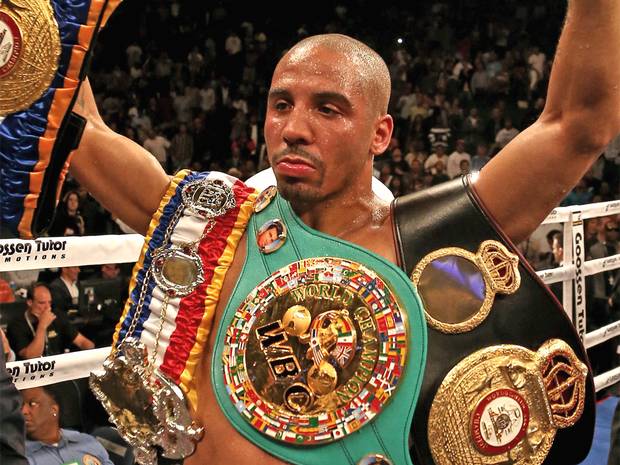 The debate rages as to whether Andre Ward, despite inactivity due to injury and seemingly endless litigation, still deserves the top spot in the super middleweight division he earned via clear victory in the World Boxing Classic Super Six tournament.

Super middleweight Andre Ward is everything a fighter should be. He’s tough, skilled, accomplished and clearly one of the top two or three fighters in the world today. At age 30, he’s the super middleweight champion of the world, in his physical prime and the most likely candidate to replace Floyd Mayweather as the sport’s biggest American star when the 37-year-old retires someday.

The problem with Ward, of course, is that his inactivity over the last year or so has been borderline absurd. Over the last three years, Ward has fought only twice. No, it’s not because the two bouts were so mega-important and obscenely lucrative that he didn’t have to ply sport’s toughest trade. It’s also not because Ward is such a huge crossover star that he’s been too busy and distracted with other things. Nope, it’s because Ward signed a contract with a promoter, the recently deceased Dan Goossen, and decided afterward that he wanted to be promoted by someone else.

Regardless, Ward is the best 168-pounder in the world today.

Super middleweight isn’t a murderers’ row. Don’t get me wrong. There are good fighters in the division, but outside of Ward and Carl Froch, there is no one currently competing in the division that would warrant consideration for a slot above Ward. Ward could stay inactive for all of 2014, and while he’d still be subject to rules and procedures sanctioning bodies and rankings organizations can and should apply to move other fighters ahead of him in rankings, the truth of the matter is that everyone would know he’s still the top super middleweight in the world.

In fact, the circumstances are eerily similar to Mayweather’s so-called retirement after defeating Ricky Hatton in 2007. Even while Mayweather was retired, there was no question among those in the boxing world about who was the best welterweight in the world at the time.

Well, that was until Manny Pacquiao ran through Oscar De La Hoya, Hatton and Miguel Cotto in succession. But there is no 2008-09 version of Pacquiao at 168 right now. While Froch is the clear leader among those who would hope to usurp Ward from his throne, Froch was soundly handled by Ward over 12 rounds when the two met in Showtime’s Super Six tournament back in 2011.

Since the win, Ward has demolished Chad Dawson, who was light heavyweight champion at the time, and dominated the previously undefeated Edwin Rodriguez. Froch’s work during the same timeframe, while impressive, is simply not enough to overcome Ward’s equally strong resume and head-to-head win over him. Froch knocked out Lucian Bute and Yusaf Mack in 2012. He decisioned Mikkel Kessler to start 2013 and ended the year by knocking out George Groves. Froch knocked Groves out again this year and already has a fight scheduled for January of 2015 in London.

Froch is a fantastic fighter. But he’s not Ward.

In a perfect world, Froch would welcome Ward to London next year. While the first fight was a clear and decisive win for Ward, the truth of the matter remains that Froch is the clear No. 1 contender to Ward’s throne, Froch has done everything he needs to do in order to earn the rematch. Moreover, Ward’s inactivity has left him with only one alphabet title belt. Ward is the WBA super champion (whatever that means). Froch is the unified IBF and WBA regular champ. Arthur Abraham is the WBO titleholder while Anthony Dirrell wears the WBC belt.

But many consider Ward the division’s true champion. Ward is the super middleweight champion according to Ring Magazine and the Transnational Boxing Rankings Board (of which I am a member). In both cases, Froch is listed the No. 1 contender.

And he should be. Froch is absolutely the best super middleweight in the world not named Andre Ward. Whatever you choose to believe about alphabet belts, sanctioning bodies and ratings panel (and there are enough of them in boxing to make your head spin), it’s hard to argue against Ward being tops at 168 with Froch trailing in after.

Because even while Ward sits on the sidelines, even as he calls more fights for HBO than he participates in, even as his single-minded obsession with ridding himself of his current promotional ties keeps him from making his mark on the sport in the most indelible way possible – one gets the distinct impression that Ward could shed off his suit like Superman at ringside, climb into the ring on any given night and whip any super middleweight in the world.

Why? Because Ward is the best super middleweight in the world. No, he doesn’t have all the title belts. No, he probably won’t maintain his high ranking among committees as he closes in on a year of inactivity. No, Ward hasn’t fought at all in 2014.

But in comparison to other super middleweights? Ward would beat them all, and when he gets back to fighting, he probably will.

Carl Froch Is The New No. 1 Fighter At Super Middleweight

It does seem slightly ironic that as I write this piece, the man who is in part responsible for my opinion being as it is, has very recently passed away. And so first a note of respect. Rest in Peace Dan Goosen. Promoters tend to engender a ‘marmite’ response with fans; you either love them or hate them. So far as I know, Mr Goosen was widely respected in the sport and his passing has been met with great sadness.

Now one might envisage a situation whereby Dan’s most recent star name but even more recently legal adversary, Andre Ward, resumes his career atop the super middleweight division.

But is he at the top?

The record books will inevitably show apparently dominant victories over the two strongest names in the division, Mikkel Kessler and Carl Froch along with victories over other world class fighters such as Arthur Abraham, Sakio Bika and an albeit weight-restricted Chad Dawson.

There is no doubting the self-proclaimed ‘Son of God’s credentials and as at September 2012 when he saw off Dawson’s challenge to his WBC and WBA 168lb titles with a 10th round stoppage having downed his opponent three times, one could easily have argued his position not only as the number 1 super middleweight, but also a legitimate pound for pound top 10, even top 5. Some excitable individuals were calling for him to be installed in the top 2 or 3 despite a relatively light body of work under his green and red, white and blue belts.

It’s fair to say that Ward has been blighted with injury since his rise to prominence on the back of the Super Six victory that converted an Olympic gold medallist and hot prospect into a boxing superstar. Hand issues reportedly hampered his dominance over Carl Froch in late 2011 and caused a protracted hiatus before his return against Dawson whereupon a serious shoulder injury then proceeded to keep him out until 2013 when he returned victorious against Edwin Rodriguez.

Since then, Ward has, for the first time since his very early amateur days, tasted defeat at the hands of Dan Goosen with his attempt to break free of his promotional contract and as a consequence has seen no pugilistic action since November 2013.

In fact, for one reason or another, Ward has fought just 3 times in 3 and a half years.

The WBC did finally set loose the green belt, offering it up to Sakio Bika, a man Ward had comprehensively beaten in late 2010, via a gimme vacant title fight against Marco Antonio Periban whom neither you nor I had heard of before nor will likely hear from again.

The WBA have faithfully stuck with their man however having the benefit of being able to offer on average sixty eight versions of their ‘world championship’ in a ‘make it up as you go along’ rule-set that now sees Ward as the ‘super’ champion despite having no other belts and Froch as the WBA-IBF unified champion which now no longer qualifies for ‘super’ status, but only gets the Nottingham boxer-puncher ‘regular’ honours.

So let’s cut through the BS here.

Does Ward warrant a world title of any grade at this time? Does he warrant #1 status in his division, let along P4P consideration?

There is absolutely no doubting the man’s talent as a boxer. He isn’t the prettiest craftsman in the game, preferring to outfox his opponents with a combination of slick defence, wily inside work characterised by an often unsightly mixture of short but accurate shots and clinches. But he is unbeaten. In 27 pro fights and an unfeasibly high number of amateur ones.
And that can’t be taken away from him.

But he’s not active. Shows no immediate signs of being active. And with the greatest respect to him beat Kessler and Froch with more than a question mark outstanding.

Were the cuts above Kessler’s eyes that appeared to be head-butt induced the principle reason for the stoppage? How badly jaded from his extended time on the road was Carl Froch who started slower than usual but was coming on like a steam train in the final quarter of the Super Six final?
And who is the best active 168lb’er in the sport today?

Froch has fought 5 times since that loss to Ward, including revenge against Kessler in the 2nd of pick’em 12 round wars and destructive stoppages of Lucian Bute and George Groves (having in my opinion legitimately stopped his man even before referee Howard Foster caught an unconscious and falling Groves and cause out and out controversy in the first contest).

Regardless, until Ward resumes his career, the best man in the super middleweight division right now is The Cobra.

And the ‘Pungi’ is still playing on this side of the Pond.