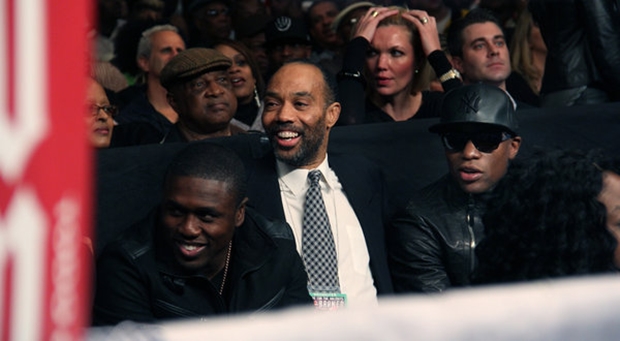 Love him, hate him, or fear him immensely, there’s no denying that Al Haymon has moved more pieces of the boxing chess game in a shorter period of time than anyone else in the recent history of the sport.

On top of amassing the largest stable of talent in boxing history, Haymon’s ambition would appear to go much further than lining his pockets with quick cash as an “advisor” to the stars.

According to promoter Kathy Duva of Main Events, Haymon is soon to be aligned with NBC and has offered the network in the neighborhood of $20 million for twenty-four dates. Four of those dates would be prime NBC network dates (including one to take place one week after the Super Bowl) and the rest would take place on the NBC Sports Network.

Duva, whose own deal with the network is set to expire, could never parlay her NBC dates into anything other than solid fight cards for the hardcore fan. Overall, the Main Events NBC shows were good, but lacked vision and promotion to extend beyond the already-hooked core boxing fan base.

Haymon, however, has the roster and, presumably, the vision, to make a solid push towards the mainstream.

If the move to NBC is an effort to “put Showtime and HBO out of the puzzle,” as Duva said in the report, this could almost be considered a death blow to Showtime Boxing, which currently depends heavily on Haymon talent and on Oscar De la Hoya’s Golden Boy Promotions. With De la Hoya’s decision to move Bernard Hopkins and Saul Alvarez back to HBO and an apparent mass-migration of talent to NBC, there won’t be much elite-level boxing talent left for Showtime to televise.

Ideally, the move would not only bring boxing back to the mainstream sports fan, but it would also be able to create the kind of stars that simply can’t by made while keeping the sport’s best talent locked away on premium cable and pay-per-view.

Some major issues need to be worked out, though, before one can judge whether Haymon’s reported plan will have a decent chance of success.

Most importantly, there’s the question of financing. Haymon’s fighters have enjoyed some nice, hefty paydays while fighting on Showtime and, unless a full scale mutiny is what Haymon wants, there better be a way to actually deliver equal, if not greater, paydays to the talent over on NBC and the much smaller NBC Sports Network. Aggressive pursuit of sponsors and merchandising deals could make up for Showtime’s guaranteed upfronts, and would likely be a better choice for the long-term health of the sport.

Then, of course, is the question of the product, itself. Matchmaking will be essential to the success of the NBC deal. Whereas Duva supplied quality match-ups, but lacked the talent to reach a wider audience during her stay with NBC, Haymon has the stars, but it remains to be seen whether he will actually put together compelling and meaningful bouts to showcase their star appeal.

Obvious one-sided squashes like Danny Garcia-Rod Salka will do nothing to bring interest back to the sport and one can only hope that the poor matchmaking and apparent stalling tactics acted out in the second half of 2014 were directly related to Haymon’s ultimate goal of taking his talent elsewhere.

Similarly, Peter Quillin’s vacating of the WBO middleweight title and the infinite delays in purse bids for Bermane Stiverna-Deontay Wilder and Danny Garcia-Viktor Postol may also be related to the move to NBC.

Haymon has enough talent to keep staffing shows for both Showtime and NBC, but the real money is in the gamble of NBC and the subsequent move of parlaying that exposure into his own self-sufficient boxing channel and, perhaps, boxing league.

As history has shown us about Haymon as a businessman, his end goal is always to create a self-sustaining universe with him acting the role of supreme being. Boxing, with its lack of central authority and endless loopholes and legal gray areas, was the perfect target for a businessman like Haymon.

“If I wanted to, I could run boxing,” Haymon reportedly told Xavier James, then-vice president for sports programming at HBO back a few years ago.

A successful NBC product would take him one huge step closer to that goal.