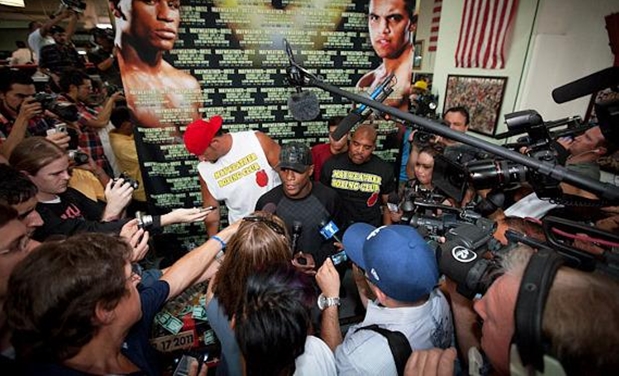 This can’t be emphasized enough– The boxing media controls the narrative of the sport and is the essential buffer between what happens and what we’re allowed to know; It’s the link between the crap pulled behind the scenes and the assurance that, no matter what, everything will be business as usual.

Control the media and you control the only weapon with which fans and athletes alike can defend themselves.

A compromised media, like the one we have today– where the major sites are either subsidized or flat-out owned by the sport’s powerbrokers– make the bullshit palatable. They wash over the garbage, smooth over the ugly little details, and help sell the product. That’s why they are kept in business, running deep in the red, hemorrhaging money, yet always, amazingly, with a bountiful budget in order to keep the hustle alive.

And the status quo is maintained via well-nurtured myopia. Crimes against the sport are encouraged to be portrayed as individual, rogue transgressions, rather than symptoms of a failed system.

So, when a horrid scorecard is turned in, the media will go after the individual judge rather than the system that actually values the existence of fantastically inept and/or corrupt judges. Some poor dummy like CJ Ross or Gale Van Hoy will be made the scapegoat and be run from the sport– at least until the smoke clears and they can return through the back door. But the rotten system that allows and even rewards these abuses is never addressed.

The mainstream boxing media is all about the appearance of propriety, temporary appeasement, and the push to distract as soon as humanly possible.

Smart fans should already know the game when it comes to the sport’s biggest sites and most powerful voices. Simply put, they wouldn’t be where they’re at if they didn’t play the role of the useful idiot– either wittingly or unwittingly.

But, sadly, those not affiliated with the major outlets or those claiming some sort of righteous independence within the machine are just as bad.

There is a breed of boxing writer now, equal parts smug and painfully naive, dedicated to  Truth, Justice, and the Politically Correct Way. They talk about change and reform, but when left to their own group-think ways, they fall right in line with the same fake solutions offered by the bought and sold set.

Back when Floyd Mayweather was making the rounds and ruffling feathers, the holiest of the boxing holy were driven to a sanctimonious frenzy over “Money” making money despite his history of violence against women.

I was held up to public scrutiny by an especially pious sort as an example of how brutish fight people were not reacting properly to the calls for holy war against the fighter. In the aftermath of that “shame on you” attack, I literally spent hours discussing the issue with lawyers via secure fax communication, to know what we are talking about you can find here secure fax information.

As I freely admitted before, I don’t have the answers to the issue of Mayweather or what should happen to a fighter’s livelihood if he should not live up to a specific standard of ethical, out-of-ring behavior. And considering that there is no centralized authority in the sport, it’s also a pretty pointless discussion to have.

The issue of what to do with Floyd Mayweather is nowhere near as important as the issue of why there’s no system in place to deal with cases like Mayweather’s.

But, of course, these holy men of the writer’s corps aren’t really about answers. Their game is about making a name for themselves as the “caring soul” and getting the applause that comes with making a moral stand– even if that moral stand leads to absolutely nothing.

I mean, really, who the hell is NOT against domestic violence?

If you were to put me on some sort of boxing regulatory panel, it wouldn’t be too hard to convince me to vote in favor of sanctions against Mayweather, to some degree.

But what good comes from me penning a Mayweather hit piece when I know good and well that there’s no mechanism in place by which he can actually be punished? You might as well write everything out on a balled-up piece of toilet paper and then immediately flush it down the crapper.

Across the board, talk of any constructive changes to the sport will always stall because there simply is no end destination for our grievances. Pretending otherwise does no good whatsoever.

Take the idea of reform in the area of performance enhancing drug testing, for example.

Instead of pushing for reform in the system (or, for crissake, the CREATION of a real system that deals with PEDs), voluntary testing– a concept universally deemed as  worthless by doping experts– was introduced on a case by case basis (and frequently left in the hands of the promoter!). From that accumulation of smoke and mirrors, a few guilty parties were spotlighted by headline-hungry yellow journalists.

But, of course, because there is no real system in place to actually deal with the issue of high-end performance enhancers, all of the “dirty” fighters were immediately cycled right back into the sport, where their future testing is entirely up to them.

The fans were temporarily appeased by the appearance of propriety, then focus was shifted elsewhere. And it was all facilitated by a media more eager to point fingers for the sake of website hits than actually find a solution.

A recent mention of Bernard Hopkins on a blog’s innocuous Top 20 pound-for-pound list was tagged by the statement that it would be “nice” if Hopkins had some sort of advanced PEDs testing. Meanwhile, twelve of the twenty fighters on that same list had never undergone “advanced” testing and the remaining eight had done this “advanced” testing on a voluntary basis and to varying degrees, which doesn’t offer a valid indication of whether a fighter is truly clean or not.

Yes, Hopkins is 49, winning fights he supposedly shouldn’t be winning, and he makes a convenient target, but in a world without a definitive authority, it’s easy to make these hand-selected accusations. If Lucas Matthysse looks particularly strong, it’s fair game to talk about his lack of testing. If Guillermo Rigondeaux looks exceptionally fast, why not point out his unwillingness to volunteer for additional testing?

With nobody ever in pursuit of answers or even looking into a medium by which answers can be attained, it’s easy to deflect, accuse, and grandstand. Most importantly, it’s easy to distract. And all of this, whether intended to do so or not, is nothing more than time-killing distraction.

Going after Floyd Mayweather is a non-issue with me, not because I love abuse against women, but because this pro-feminist outrage will not live past Mayweather’s shelf life as a main stage fighter.  And, unless the next guy who batters a woman is an unlikeable dolt in the eyes of the media, there will be no similar outrage for similar transgressions.

Mike Tyson and his out-of-control awfulness stopped being an issue as soon as Tyson stopped being TYSON. Now, almost twenty-five years after the worst of the worst, Tyson is practically a beloved pop icon among the media. Is it that time heals all wounds, or that there’s simply no more maudlin street cred to be had in going after an aged, self-defeated Tyson?

Whatever the case, these fits of moral babbling– from Mayweather to PEDs to everything else– are never intended to actually go anywhere. It’s just traffic fodder for a few extra clicks and/or to garner a warm, fuzzy feeling about the writer’s own righteous awesomeness.

All of this agenda-riding showbiz outrage from the media helps maintain the status quo.

We’re all in agreement on every single issue. Who wouldn’t be?

The problem is that while the media is whipping us into a frenzy about the superficial symptoms of a great infectious disease, that disease is still alive and thriving within the sport.

Let me just make this clear– I’m not claiming to have all of the answers, or any answers, actually, although I’d be happy to sit and brainstorm possibilities with fair-minded boxing people. I just think it’s important that we stop distracting ourselves from the one, singular issue from which all of the sport’s craziness emanates– the lack of a centralized, independent, and transparent authority.

Boxing and its media will forever be full of creeps, crooks, and disgusting sycophants, so, reform will always be an uphill climb. However, the last thing we need is this new crop of self-serving, sanctimonious  writers taking fake, intellectually disingenuous stands and pandering for love at the expense of the hard work of pursuing change.

Most recently, the major damage done to the sport hasn’t come from the usual suspects looking to line their pockets, it’s from those claiming to work in the sport’s best interest.

It reminds me of the old refrain: With friends like these, who needs enemies?

At the risk of taking plenty of social media flak from my “colleagues,” I’d like to announce a potentially big change to our site and to the way we do business:

In pursuit of our goal to maintain an independent and fair-minded media for our sport, The Boxing Tribune is aiming to be the first major boxing news site entirely funded by the fans.

To compete with the big boys, though, we need a budget that can help us get some of the tools and behind-the-scenes aids all major sites need.

If you’d like to read more about this and/or contribute to the cause, click the following link: http://www.gofundme.com/fbqcgo

You can email Paul at paulmagno@theboxingtribune.com or watch as he’s sporadically attacked on social media by FULL members of the BWAA.  You can also buy his book, Notes from the Boxing Underground! Paul is a full member of the Burger King Kids’ Club, a born iconoclast, and an ordained minister in the Universal Life Church.