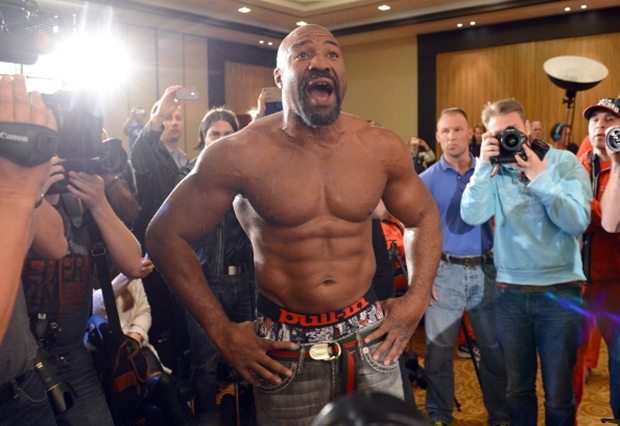 Former heavyweight world titlist, Shannon Briggs, is claiming to have received death threats over a series of videos he has posted on the internet where he appears to be stalking current heavyweight champ, Wladimir Klitschko.

In the much-talked about videos, Briggs can be seen confronting the IBF/WBO/WBA world champ at the gym, at a Florida restaurant and, most recently, in the waters off Hollywood, Florida. The videos are characterized by Briggs’ new catchphrases, “Let’s Go Champ” and/or “Everywhere you go, I go.”The purpose, of course, is to somehow work his way into a big money title fight against Klitschko.

The champion has mostly kept his cool under the harassment, although, word is that he may be considering a restraining order.

However, Briggs claims that while Klitschko has maintained his composure, Klitschko’s fans have not.

“I’ve been getting death threats.” the 42-year-old recently told Mitch Abramson. “They say if I show up to Germany- there’s going to be a problem.”

But Briggs insists that the threats mean little to him and will not stop him in the pursuit of the bout he wants.

“I take this very serious but at the same time [it] is comical to me,” Briggs later told Fightnews. “I literally grew up and lived on the rough mean streets of Brownsville. During that time Brownsville was considered one of the most dangerous neighborhoods in Brooklyn, New York, and in the U.S or world for that matter. There could literally be death all around me at anytime…The fact that someone thinks that sending me the threats by message…already shows the cowardliness. I mean really. Written messages? How weak is that? Speaking of cowardliness, I would truly hope that Wladimir Klitschko is more of a man than someone who needs his groupies to fight his battles. I hope I don’t have him that scared of me.”

In 2010, Briggs was shutout over twelve rounds by Wladimir’s older brother Vitali in a bid for Vitali’s WBC title. The beating would require Briggs’ hospitalization for a number of days following the bout.