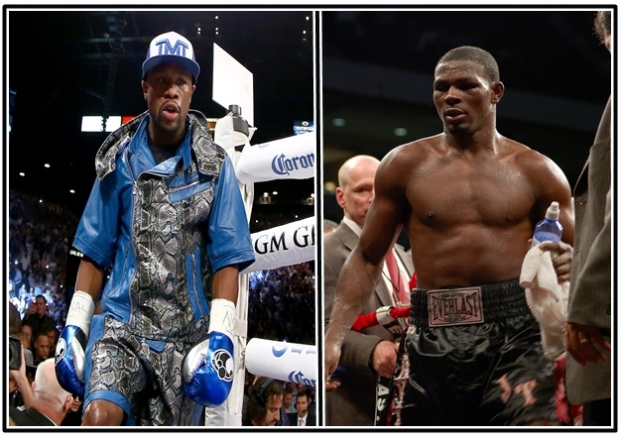 In the Olympics of sucky match-ups, the rumored Floyd Mayweather vs. Jermain Taylor bout would easily take the Gold (right ahead of Pacquiao-Algieri, which, sadly, is NOT just a rumor).

Yet, Mayweather-Taylor is the buzz all across the online Universo Pugilistico.

On the surface, it sure would appear to make sense from a Team Mayweather perspective.

Seeing that Taylor is advised by Mayweather guru, Al Haymon, “Money” could probably get the bout signed with little problem.

Convincing casual fans that this bid for a middleweight belt is buy-worthy shouldn’t be all that hard, either. Taylor has one of the four recognized world titles and probably has enough name recognition from his prime days to carry his part of the promotion.

Even some hardcore fans may be snared by the promotion, sold into seeing Mayweather-Taylor as some sort of prelude to Mayweather-Golovkin. As is often the case in cynical match-ups involving big-name stars, sometimes the “next” fight is the biggest sales factor in purchasing the present bout.

Barring some extremely odd occurrence, Mayweather would win such a match-up and add Taylor’s IBF belt to the mound of title belt gold already in his possession. Then, he could move back to his natural weight class and finish up his Showtime deal.

This is just an ugly glimpse at a possible future, though.

As far as anyone with real knowledge of the situation knows, this Mayweather-Taylor talk is pure fantasy at this point. It should also be pointed out that ugly, meant-to-disparage Mayweather vs. so and so rumors always pop up between Mayweather bouts. In the past, everyone from an aged Nate Campbell, to Paul Spadafora, to Paulie Malignaggi, to a still-teenage Saul “Canelo” Alvarez were rumored to be hand-picked opponents for Mayweather before proven to be pure fantasy.

Hopefully, for the sake of the fans, Mayweather-Taylor is nothing more than fantasy as well– because, while the bout makes sense to a Mayweather determined to add another trinket to his collection before retirement, it’s a total loss for everyone else.

The fans deserve better than a jaded Mayweather pot-shotting a shot Taylor for twelve rounds with a $70 price tag attached.