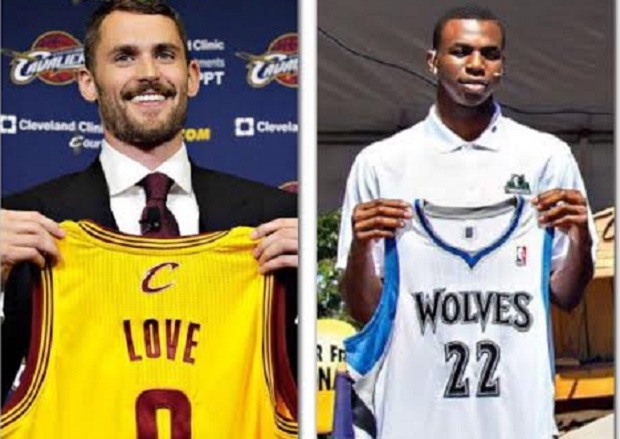 What if boxing operated like most team sports? Yes, I know, boxing is an individual sport, not a team sport. However, it operates more like a team sport than most individual sports do if you look closely. Promoters act as owners, managers as agents, trainers as coaches, so on and so on.

The major difference between boxing and all sports though is there isn’t an off-season. Only the WWE and UFC have a year-long schedule, as does boxing.

So, I ask the question, how would boxing be different if it were run like a team sport?

When the Cavs dealt phenom Andrew Wiggins and #1 pick Anthony Bennett, to the Timberwolves for Superstar Kevin Love, I visualized a blockbuster boxing deal that all fans would love. More on that at the end of this article, stick with me.

First, let’s talk about drafting. When was the last time a promoter besides GBP, Top Rank or a big European promoter signed a highly-regarded prospect? It’s been a while. What if, after every Olympics, World Champions or National Champions, amateurs were able to make themselves available to promoters, via a draft. Promoters’ draft spot would be based on current roster, number of champions and numbers of shows promoted that current year. Also, free agent, club level fighters could enter that draft as well.

What if Gary Shaw landed the # 1 pick in 2012 and picked Lomachenko? Who would have drafted Rigondeaux, Wilder or Spence? The bigger question– what would happen to the promoter who drafted a Ricardo Williams or Fransisco Bojado? Would it set them back a few years like JaMarcus Russell did with the Raiders?

Now on to free agency. Instead of seeing GGG and Rubio, what if Top Rank couldn’t hold Chavez Jr out of a bout because of contract negotiations? Fighters, like all other athletes, should be able to finish there contract out before deciding on re-uping or opting out to join another team (promoter). What if Golden Boy pulled a Philadelphia Eagles DeSean Jackson move, with James Kirkland? Determining his talent wasn’t worth the headaches.

Just imagine a free agency period if Mayweather and Pacquiao were free agents? What kind of contracts would promoters throw at these 2 icons?

Al Haymon would be the Drew Rosenhaus of boxing

Now, remember when I said I had a blockbuster trade like the Cavs and Wolves pulled off. Here it goes… What if Top Rank traded Manny Pacquiao to Golden Boy for Danny Garcia and Adrian Broner? Would Bob pull the trigger? I believe the deal is great for both sides. Top Ranks receives 2 fighters who have, maybe, a combined 10-14 years of left of high level attraction, in exchange for a fighter 1-2 years away from retirement. Golden Boy receives the key component to the biggest fight in the history.

Now, with Pacquiao free from Top Rank, would there be any excuse to why the fight with Mayweather wouldn’t happen. Would we finally see after all these years who was in fact, actually ducking the other man? Man, boxing would be so much more intriguing if it operated like a team sport.

And yes, there would be a cap salary so promoters couldn’t tie up all the B level fighters like Matthysse, Maidana and Bradley.