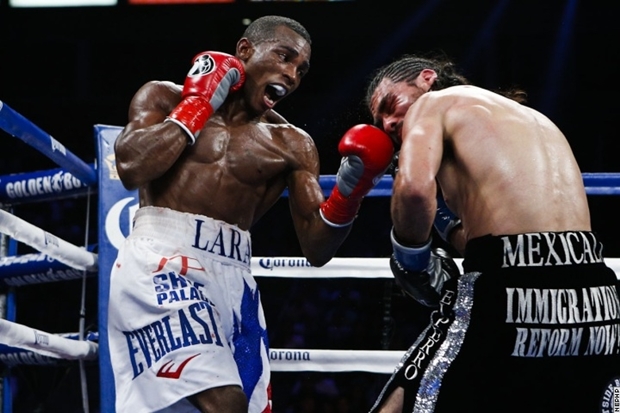 Despite a recent loss to Saul “Canelo” Alvarez, Cuba’s Erislandy Lara (19-2-2, 12 KOs) is still one of the world’s best junior middleweights and still, for what it’s worth, holds the WBA’s “regular” 154 lb. world title.

Ishe Smith (26-6, 12 KO), as a former IBF belt holder and a recognizable name in the division, is also a somewhat prominent figure in the junior middleweight division.

Lara and Smith find themselves matched against one another on something billed as a Showtime “special edition” emanating from, of all places, San Antonio, Texas.

How a smooth-boxing Cuban and a crafty, defense-minded Las Vegas native would wind up in the Mexican-heavy, action-craving San Antonio market is anyone’s guess, but the entire event screams of Showtime somehow making last-minute good on some prior promise.

Whatever the case, the fans will be left with a curious match-up that is almost guaranteed not to be anything resembling action-packed. It will be a bout reserved for only the most loyal of boxing fanatics, willing to sit through long periods of jockeying for position and looking to counter punches that aren’t coming.

Although Lara-Smith is a bout with rankings significance, there was no sanctioning body muscle mandating it and no demand from fans insisting on it. Instead, this poorly pieced-together contest seems to be the naive result of someone looking up and down the rankings and finding the two biggest names without dance partners on that date.

Again, someone could easily assume that pairing the two had something to do with completing a promise to the management of both fighters– Al Haymon for Lara and Floyd Mayweather for Smith. But that is pure speculation..speculation driven by an otherwise odder than odd stylistic match-up almost guaranteed to disappoint.