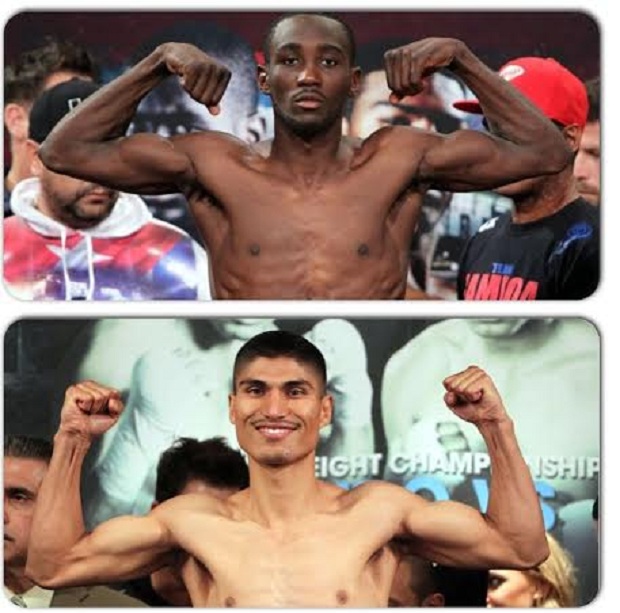 Talk about an interesting match-up, two undefeated, low key fighters respected by any and all fans.

“Bud” Crawford is a humble young man from Omaha, NE, with a record of 29-0 with 17 KO’s. He is the current WBO Lightweight Champion. He is scheduled to face Raymundo Beltran on 11/29, live on HBO. He’s defeated Yuriorkis Gamboa, Brendis Prescott and Ricky Burns

“Mikey” Garcia is a well-spoken, quiet hombre residing in Oxnard, CA. He currently sits at 34-0 with 28 KO’s. Training under the watchful eyes of his older brother, Robert Garcia, Mikey has claimed both the WBO Super Featherweight and Featherweight title. He’s defeated Juan Carlos Burgos, Juan Manuel Lopez and Orlando Salido

Both fighters are main event worthy, topping HBO Championship Boxing telecasts. Garcia’s name carries more weight due the success of not only his career, but Robert being one best trainers in the world. However, after Crawford’s most recent performance, he as well as his trainer, Bo Mcintyre, are steadily becoming household names

Garcia is considered one of the best technical boxers in the game. He has a complete set of tools to go along with fight-ending power. His complete destruction of fighters has earned him a high level of respect and admiration. Unfortunately, he’s embattled in a contract dispute and has been shelved since January. There is no denying his skill level– but how will a year out of the ring affect the prime of his career?

Crawford proved in the Gamboa fight that when he puts his foot to the pedal, he’s a force to be reckoned with. After a slow start, Crawford proceeded to level a beat down upon the SMS Promotions fighter. His ability to dominate from either stance makes him a dangerous fighter. With Top Rank and HBO investing in making him the next superstar, is it safe to say Crawford has actually replaced Garcia?

With both fighters positioned to move to Jr. Welterweight, a meeting between the fighters could determine who will be a major player in the division. With opponents like Garcia, Broner, Matthysse and Provodnikov, the winner has more than one option for bigger names to follow up with.

On to my prediction. Both fighters are talented, there’s no question about it. Neither fighter has shown a glaring weakness but someone has to win, hopefully. On pure eye test, I’m rolling with Crawford. After studying the Gamboa fight, I see a fighter with next level talent, capable of cleaning out the Jr. Welterweight division.