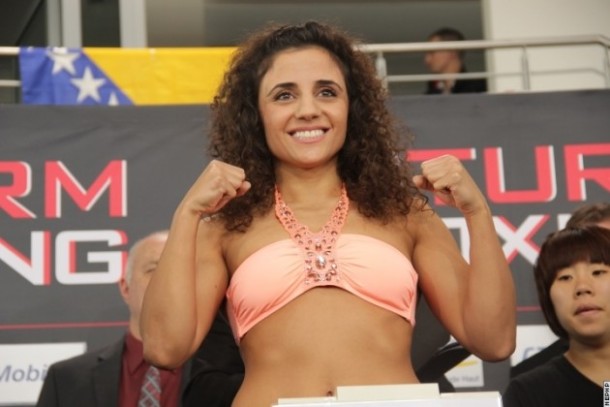 It was a big week for the ladies, plenty of big fights cover, so away we go…

Germany’s “Killer Queen”, Susi Kentikian (34-2, 17 KO’s) successfully defended her WBA flyweight championship for the third time in Stuttgart, Germany, scoring a 10 round unanimous decision over Japanese flyweight Naoko Fujioka (12-1, 6 KO’s) at the Porsche Arena, dealing Fujioka her first loss.  Scores of the bout were 96-94, 97-93, and 97-94.

This was the fifth straight win for Kentikian, all title contests, since a pair of losses in 2012 cost her the WBA, WBO, and WIBF flyweight belts.  She returned in early 2013 to win the interim WBA title and regained full championship status when she defeated Carina Moreno later that year, avenging a prior loss.  Before the two defeats, Kentikian had a championship run that lasted over five years with three titles.

Fujioka came in undefeated, holding the WBA super flyweight crown.  She is also a former minimum-weight champion for the WBA as well the OPBF.  She has a total of five wins in world title bouts and holds victories over Anabel Ortiz and Naoko Yamaguchi.

The aforementioned Anabel Ortiz (16-3, 3 KO’s) and Etsuko Tada met for the second time, contesting for the WBA minimum-weight title.  Tada, who had retained the belt through 10 defenses, lost it to Ortiz in their first bout in July 2013 in Japan.  She had since won one bout while Ortiz picked up three wins, two being title defenses.  Ortiz came out on top again, scoring her second victory over Tada by 10 round split decision.  It’s the second world title run for Ortiz, who also held the WBC minimum-weight belt for a brief time in 2009-2010.  She has also been a WBC silver champ as well as a Mexico light flyweight title holder.

Swedish light middleweight Mikaela Lauren (23-3, 8 KO’s) won her third world title, defeating Aleksandra Magdziak Lopes (10-3-2, 1 KO)  by close, majority decision to win the vacant WBC light-middleweight strap.  Lauren entered the bout holding the UBO and WIBA titles, and having a three fight win streak after a failed middleweight title shot last year against Christina Hammer.  Scores of the bout were 96-94 twice, and 95-95.  The loss puts Lopes at 0-2-2 in her last four bouts with two failed title shots.  After losing her pro debut, she had won 10 straight before losing to Tori Nelson, followed by two six round draws with Nicole Woods and Althea Saunders.

Headlining a Friday night show at the Twin River Event Center in Lincoln, Rhode Island, undefeated Shelly Vincent (13-0, 1 KO) retained her undefeated record and walked away with the vacant UBF super bantamweight title, her second belt, after defeating Jackie Trivilino (9-9-3, 1 KO) by 10 round decision.  It was a close majority win for the Rhode Island native, who was fighting in her first scheduled 10 rounder, and also holds the WIBA International title in the same weight class.  Trivilino, who was coming in off a controversial loss to Heather Hardy in June, kept it close, but lost by scores of 98-92, 96-94, and drawing on one card with a  95-95 score.  Vincent ‘s been looking face Hardy, calling out the Brooklyn native on social media, YouTube, and from Ringside.  Hardy’s stated that she’s up for the fight if the promoters can make it happen.

At the Longshoremen’s Hall in San Francisco, California, 44 year old home town fighter Martha Salazar (13-4, 3 KO’s) won the first title of her 14-plus year career by defeating Tanzee Daniel (4-4-1, 1 KO), shutting her out over 10 rounds for the vacant WBC heavyweight crown.  Salazar has only fought three times since 2005; a world title loss in 2007 was followed by six years of inactivity.  She came back in April of 2013 and dealt Sonya Lamonakis his first loss before facing Daniel this weekend.  Daniel, who had started her pro career at 4-0, came into the contest winless in four prior bouts, going 0-3-1 with the three losses coming against Lamonakis.  This was her first 10 round outing.

Undefeated Lisa Marie Vizaniari (8-0, 4 KO’s) stopped 47 year old Kathy Rivers (14-6-3, 5 KO’s) in Queensland, Australia to win the vacant WIBA heavyweight belt.  She is also the WBF champion, having won that title in 2012 but has yet to make a defense.  For Rivers, this was her first bout in over seven years, making it a mystery how she turned up in a title bout to begin with.

Melissa St. Vil (6-1-3) and Ashleigh Curry (6-9-3, 1 KO) fought to a six round draw at Martin’s Valley Mansion in Maryland.  This was St. Vil’s second non-title bout since winning the IWBF welterweight title in 2013.  Also on the card, WIBA welterweight champion Tori Nelson (12-0-3,1 KO) won a four round non-title bout over Lucretia Meacham (3-13, 1 KO).   Nelson is scheduled to make her fifth title defense this coming Saturday against Victoria Cisneros.

NABF flyweight champ Jocelyn Arroyo Ruiz (17-0) took a 10 round decision over WBC silver minimum-weight title holder Mayela Perez (11-17-4, 7 KO’s) in Mexico.  This was being reported as a title contest, but which title is unclear as some have claimed the bout to be contested for the vacant WBF junior flyweight title and others have said the interim WBA junior flyweight strap was up for grabs.  Boxrec.com had no title listed at the time of this writing.

Tuesday night in Belgium, Delfine Persoon (30-1, 13 KO’s) defends the WBC lightweight title against Diana Prazak (13-2, 9 KO’s), the current WBC super featherweight champion.  This is Persoon’s first defense, having won the title in April from Erica Anabella Farias.  She also holds the WIBF, WIBA, and WBF lightweight belts which aren’t up in this contest.  Prazak won her championship with an eighth round knockout of Frida Wallberg in June of 2013 in a contest that ended Wallberg’s career.  Prazak is also a former WIBA super featherweight champ.

“HARDY”, a documentary film based on the life and career of WBC International and UBF super bantamweight title holder Heather “The Heat” Hardy will premier November 16th at Bow Tie Chelsea Cinemas as part of DOC NYC, America’s largest documentary film festival.  Directed by Natasha Verma and executive produced by Lou DiBella, the film covers Hardy from her days as on the amateur circuit up to her current status as a professional fighter.  The film covers Hardy’s life beyond the ring as well, and also features interviews with many top figures in the sport.  The Boxing Tribune interviewed Hardy and Verma last year while the movie was still being filmed.  That interview can be read HERE