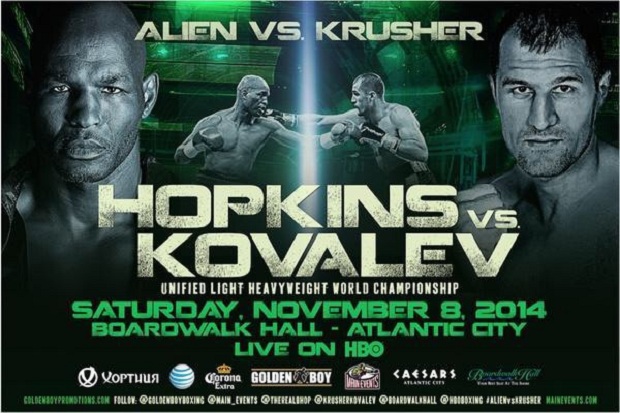 The Sergey Kovalev vs. Bernard Hopkins light heavyweight title unification bout on Saturday night was a ratings success and, actually, the second highest-rated premium cable show of the year (Behind Julio Cesar Chavez vs. Bryan Vera).

According to Nielsen Media Research, the Kovalev-Hopkins main event on HBO drew an average of 1.328 million live viewers for the premium channel. Total viewing numbers, including views of the rebroadcast, were not available as of this writing.

The bout was a predictable success, considering the solid numbers both fighters have produced over their last several appearances and the general quality of the match-up.

Still, however, it should be pointed out that boxing shows these days, generally, fall into the 800K-1.3 million viewer range, which continues to trend slightly downward (with occasional upticks) as compared to even five or six years ago, despite increased subscriber numbers for HBO.

For example, Hopkins vs. Joe Calzaghe and Wladimir Klitschko vs. Sultan Ibragimov delivered 1.89 and 1.8 million viewers, respectively, back in 2008. Prior to that, ratings numbers were higher, with even a lower subscription base.

Meanwhile, Showtime, which has improved its overall ratings performance, still trails far behind HBO in terms of bringing fight fans to the TV.