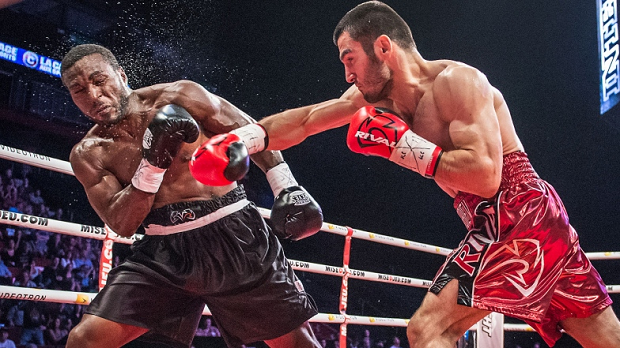 Beterbiev exploded onto the scene with a devastating knockout of former world champion, Tavoris Cloud. It wasn’t just the fashion in which he destroyed Cloud, the most intriguing factor was that he did in only his sixth professional bout.

In most cases, his NABA title would disqualify him from being a prospect. However, with only six fights under his belt, can you consider him a contender? Kovalev, Stevenson and Pascal are out of the question. Bigger question, would any of the contenders, Hopkins, Bute, Fonfara, Rodriguez, Dawson, or Alvarez risk their ranking against a killer like Beterbiev?

Probably not. So in the meantime, he’ll fight undefeated, lesser known, Zack Paige Jr (15-0). Ideally, one would like to see him face the likes of Beibut Shumenor, Issac Chilemba or Blake Caparello soon. Promoter Groupe Yvon Michael has done a great job so far, but they risk his popularity leveling off without bigger names.

Currently, Beterbeiv is looking to compete in the 2015 World Amateur Championships and the 2016 Olympic Games for his adopted country, Canada. There is a petition circulating, arranged by his manager, Anna Reva, in efforts to help Beterbiev compete. He is currently 6-0 in the light heavyweight division, ranked in the top 20 of the world.

When searching for and choosing Prospect of the Month, 5 basic guidelines are followed:

1. Fighter cannot be ranked in the top 10 in any of the 4 major sanctioning bodies

2. Fighter cannot claim a major title in any of the major sanctioning bodies, including regional or continental titles.

3. Fighter must have what can be considered, a significant win

4. Fighter has to have at least been scheduled for an 8-round bout

5. Fighter has to have been active within the last 2 months.