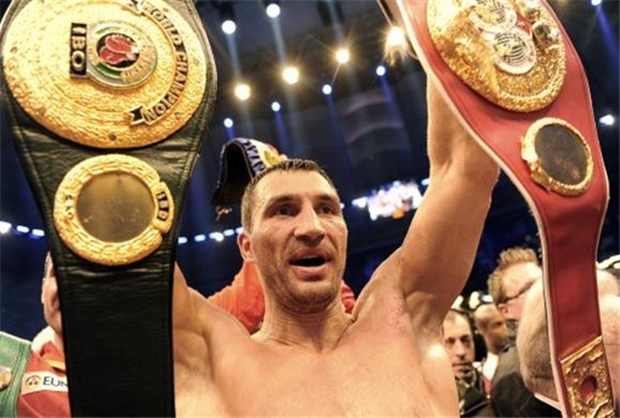 O2 World Arena, Hamburg, Germany– For the first time in a very long time, Wladimir Klitschko (63-3, 53 KOs) put on a legitimate show in dismantling and destroying IBF no. 1 contender Kubrat Pulev (20-1, 11 KOs) Saturday in a brutal fifth round knockout victory.

The genius behind the success of Klitschko was also his main downfall in trying to attract fans outside of Eastern Europe. His safety-first style backed by unmatched physical strength created dull, but dominant wins eventually consummated by two jackhammer fists that would close the show. It is a most effective style, but also one lacking in anything resembling the drama fight fans traditionally look for in their high-end prizefighting.

In this bout, his seventeenth straight world heavyweight title defense, Klitschko came out with a passion never before seen, blasting his Bulgarian challenger with a short left hand in the first that led to two knockdowns that same round.

After another knockdown in the third, Klitschko entered the fourth round up by at least six points on the judges’ scorecards and Pulev found himself in a very tough spot, in such a hole with very little one-punch power.

Pulev fought back bravely, doing enough in the fourth to take the round on The Boxing Tribune’s unofficial scorecard and doing fairly well in the fifth until another left from Klitschko dropped him again and closed the show.

It was a brutally dominant showing from Klitschko, who likely won back many disenfranchised American fans with this HBO-aired, fists-flying performance.

If the 38-year-old IBF/WBA/WBO champ injects this same level of crowd-pleasing aggression into future performances, all of the “Why doesn’t Wladimir Klitschko get the respect he deserves” debates will be a moot point as fans, everywhere, begin to clamor for his presence and follow his exploits.

Next up for Klitschko should be a run for the WBC title and the winner of the upcoming Bermane Stiverne-Deontay Wilder showdown. Many other interesting challenges also await, although former titlist Shannon Briggs, who was taunting Klitschko loudly from ringside at the 02 Arena and has been stalking the champion for months, seems intent upon somehow cutting to the front of the line.