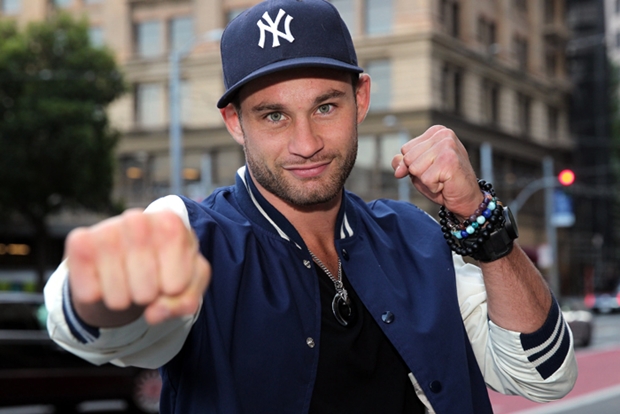 Chris Algieri, the man, is hard to dislike.

He certainly seems decent enough as a human being and, as a fighter, he’s a club pug done good, climbing through the ranks and improving along the way. Even now, as he prepares for the opportunity of a lifetime and gets ready to cash the biggest check of his life, it’s hard to not like him.

But sometimes good people get caught up in bad games.

Pacquiao-Algieri is not a good buy for the consumer and if it turns out that this assessment is wrong, it will be because of some bizarre fluke that works against every bit of available boxing logic.

But if all plays out as it should, Pacquiao-Algieri will stink. It’s a “big ticket” fight featuring a Hall of Fame legend vs. a fighter with precisely one disputed, noteworthy world class win on his resume. Defenders of this trash should immediately have their bank books and debit cards confiscated. Again, it stinks.

And that stench began back in June at the Barclays Center in Brooklyn, New York when Algieri upset WBO junior welterweight champ, Ruslan Provodnikov in a bout where more than half of the polled media felt that the favorite should’ve kept his title.

Okay, a close fight is given to the local kid, despite spending more than two-thirds of the fight in full retreat. Not ideal, but stranger things have happened.

Stranger things like the WBO’s #13 ranked Algieri getting the title shot at all.

Stranger things like Provodnikov being pushed into a go-nowhere bout in what would be Top Rank’s final co-promotional option on him. Historically, Bob Arum and Top Rank haven’t been so keen on letting fighters slip away unscathed when their contracts are up. And from a boxing business standpoint, it certainly doesn’t make sense to let your guy risk a loss against someone with whom you have no deal.

Except, Arum had been talking up Algieri for quite awhile and had a solid relationship with Algieri’s co-promoters, who just happened to be, at least in part, Provodnikov’s people as well. And given how quickly Pacquiao-Algieri was signed, sealed, and delivered, it’s safe to assume that all parties were firmly on board and had a reasonable expectation of what they’d be seeing when the deal finally came down.

Provodnikov-Algieri was no “eliminator.” How could a fight between a world champ and a club fighter, ranked no. 13, be an eliminator to anything?

The fake narrative now says that if Provodnikov had beaten Algieri, he would’ve moved on to face Pacquiao. This was by no means a sure thing and, actually, would’ve been a tough fit as trainer Freddie Roach, who works with both Pacquiao and Provodnikov, was already talking about removing himself from the bout entirely and watching on TV if the two fought.

Another issue with Provodnikov was the $10 million purse he was reportedly expecting if he got the call from Pacquiao.

With no options left on Provodnikov, a high purse demand awaiting, and the Freddie Roach conflict in place– plus no guarantee that Provodnikov would bring in the much-needed casual fan to the PPV– it was unlikely that the “Siberian Rocky” would’ve gotten the call unless some major issues could be settled.

With Algieri, though, it would all be smooth sailing as the new main stage arrival would settle for a fraction of the payday that Provodnikov was reportedly expecting. Plus, although Algieri’s co-promoters wouldn’t comment on their deal with Arum when The Boxing Tribune contacted them in June, it has to be expected that Top Rank will retain options for at least a couple of Algieri’s future bouts.

So, if the reader is still unsure about the seediness of the situation under which Algieri beat Provodnikov, let’s just paint the picture again.

Local kid with one foot into a Top Rank deal faces a veteran fighter who was stepping out of a Top Rank deal. If the veteran wins, there will be pressure for a Pacquiao bout– one which represents all sorts of business, personal, and competitive conflicts, without guaranteeing any real financial upside. If the kid wins, all conflicts are avoided and all the “suits” take a roll of the dice in creating a new star.

This is nothing new in boxing. Understanding the business is key to understanding the ebb and flow of its players- especially in a business where the “suits” are also the ones paying the officials.

This is not to say that the fight was necessarily “fixed,” just that the business interests of those involved were absolutely not aligned with a Provodnikov win that evening– and the movement of boxing tends to closely follow the business whims of its masters.

Algieri is a nice guy caught in a lousy situation. He is, by no means, responsible for this farce. But it’s a situation that may actually play out to completion on November 22 and make him a star in the process. Good for him.

It sure would be a sweet and wonderful world if everything was always on the level and boxing worked just like it does on your Playstation 3. Unfortunately, in the real world, business and politics dictate much of what we’re allowed to see.

Don’t blame the messenger for ruining the macho fantasies of “one ring, two men, fight until winning with honor.”

And don’t blame Chris Algieri, either, for taking this wonderful opportunity and making the most of it.