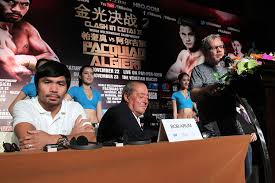 A Manny Pacquiao fight is almost always a must-see fall event. Even when matched against the likes of Joshua Clottey or a past-his-prime Shane Mosley, you wanted to go watch him work. If watching a Pacquiao (56-5-2, 38 KOs) fight involved shelling out twenty bucks to share a table and awkwardly play footsie with strangers at your neighborhood sports bar, you inevitably did it. Since Pacquiao’s arrival, a 2003 TKO win over Marco Antonio Barrera, he’s been a fighter to watch. And from basic HBO to his Pay-Per-View coming out party against Oscar De La Hoya in 2008, Pacquiao’s legend grew. Manny Pacquiao’s tremendous gifts get the lion’s share of the credit for his rise to superstardom, but the vilification of Floyd Mayweather, as well as Pacquiao promoter Bob Arum’s clever manipulation of the media, played a huge part.

During Floyd Mayweather Jr’s brief retirement from 2008 to 2009, Pacquiao took his place as the pound-for-pound best in the game. And since Mayweather’s return the two superstars have circled each other while maintaining a healthy distance. Their respective management teams only officially negotiated once (in late 2009/early 2010), despite the media grandstanding and false claims on both sides. Both men have made a good living talking about the other, while never actually intending to make good on their promise to try to make what could be the biggest fight in history.

For years, Arum and Team Pacquiao worked behind closed doors securing fights with offense-first brawlers with a significant dislike of sound defense, while publicly lambasting Mayweather’s refusal to sign a contract to fight Pacquiao (but never really negotiating with Mayweather’s team). Mayweather’s name was also liberally used in Pacquiao’s fight promotions. Each fight was played up as a potential Mayweather-Pacquiao eliminator, with the grand prize just one fight away.

And Floyd Mayweather and his team are hardly innocent of any trickery and misdirection. Whether merely answering the questions asked of him, or steering the narrative in an advantageous direction, Mayweather name-drops Manny Pacquiao quite often.

The blame for Mayweather-Pacquiao not happening eventually swung to the middle, and the universal acceptance of any Pacquiao opponent slowly became a thing of the past. It became acceptable to criticize Pacquiao’s hand-picked, and sometimes recycled opponents.

With the recent box office struggles of Mayweather’s two fights with hard-hitting Argentinean slugger Marcos Maidana and the dud about to touch down in Pacland, it would appear the superstars have gone to the old well once too often.

Saturday night’s welterweight title fight between Pacquiao and unheralded lottery winner Chris Algieri (20-0, 8 KOs) is a turd, no matter how hard Bob Arum and his team of spinsters polish it, mold it, shape it, and call it a Snickers bar.

Bob Arum, Top Rank, and most importantly Manny Pacquiao – who has put his career entirely in the hands of his promoter and advisor/manager Michael Koncz – are faced with yet another box office bust. Despite the best efforts of the spinsters, few bought into the backstory of “The Real Rocky”, Chris Algieri. Few think he’ll really fare as well as the fictional Rocky. Few think he should be in Macau on Saturday night.

The well is dry. The universal goodwill for Pacquiao, and most importantly, the list of available Top Rank-promoted welterweights are at their conclusions. All that’s left now is to go to Mayweather, hat in hand, and get down to business.

The junior welterweight division awaits Manny’s arrival. Or haven’t you been paying attention to the reality seeping out amidst the hollow promises of Mayweather-Pacquiao in 2015?