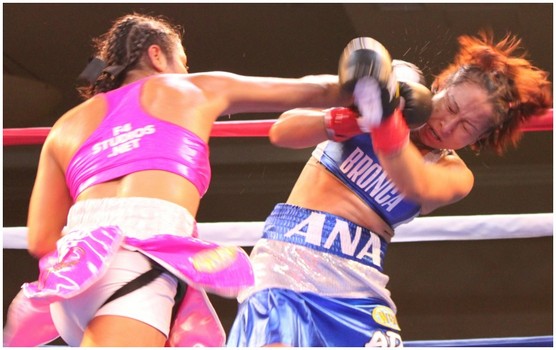 The bout, held at the Crowne Plaza Hotel in San Diego, California, was billed “Dangerous Divas II”. Promoted by Bobby D. Presents and Zanfer. The world title contest was San Diego’s first in nearly 10 years, and the cities first-ever female title contest. It was the headlining attraction on a five-bout card that also featured Leon Spinks III.

Enriquez brought her pro career to the United States earlier this year after securing nine victories in her hometown of Tijuana, Baja California, Mexico. Once hitting the U.S., she tallied four wins in nine months time, winning the NABF light flyweight belt and securing a top five ranking with the major sanctioning bodies which led to this weekends world title opportunity.

The victory is a huge step for the Mexican star, as it marked not only her first world title, but her first 10 round bout against her most experienced opponent to date; it was also her first time facing a southpaw.

Arrazola is the current WBF light flyweight champion, and has challenged for world titles between the minimum-weight and flyweight divisions on multiple occasions, going the distance with top pound for pound fighters Yesica Bopp (twice) and Susi Kentikian.

In Toluca, Mexico, WBC light flyweight champion Ibeth Zamora Silva (21-5, 8 KO’s) retained the title with a comfortable 10 round decision over the WBC’s International flyweight titleholder, Jessica Chavez (21-4-3, 4 KO’s). The win was the sixth straight for the defending champ who was making her third defense of the title she won in 2013 with a win over Naoko Shibata. In 2009-2010 she held the interim WBA World minimum-weight belt.

Chavez came in unbeaten in her prior 12 bouts, including a wins over Yesica Bopp, Irma Sanchez, Melissa McMorrow, and a draw with Arely Mucino. She’s also a former IBF and WBF light flyweight champion.

After running up 10 fight knockout streak against lesser opposition, Casalinuovo began to gradually step up her opposition this year, stopping the more experienced Yahaira Hernandez in April to win the vacant title before making her first defense this weekend. This was the third go-around for Zapata, who had failed in two prior world title opportunities in 2007 and 2009.

Layla McCarter (36-13-5, 8 KO’s) and Melissa Hernandez (19-6-3, 6 KO’s) headlined a card at the Orleans Hotel & Casino in Las Vegas, Nevada. After splitting a pair of bouts in 2007, the two faced off for a third match up this weekend, a scheduled eight round bout with no title at stake. In their first meetings, the two fought for the GBU lightweight title; McCarter held the belt coming into the first bout, winning by RTD 8, but Hernandez would take the title in the return bout, winning an eight round decision. Both would go on to hold multiple championships in the years to follow with McCarter going inactive for over two years after a WBA light middleweight title win in 2012. The time off may have done her good, as she would return to shut out Hernandez 80-72 on two cards and score 79-73 on the third.

WBA middleweight champion Teresa Perozzi (9-5-3, 1 KO) was dealt a tough loss in her attempt to unify her title and the vacant IBA middleweight belt when Kali Reis (7-3-1, 3 KO’s) made the trip to Southampton, Bermuda and stopped her in three rounds. Perozzi was coming off a pair of draws with Tori Nelson, and hadn’t fought in nearly two years. Reis, who lost to Nelson in 2013, came in off a decision loss to Mikaela Lauren earlier this year.

Linda Laura Lecca (12-2-1, 3 KO’s) retained the interim WBA super flyweight title, defeating Maribel Ramirez (9-7-2, 3 KO’s) over 10 rounds in Peru. It was Lecca’s second defense after winning the title earlier this year. Ramirez had won just one of prior four fights.

Susana Cruz Perez (17-6, 8 KO’s) made her trip from Tlalnepantla, Mexico a successful one, and won the WBF minimum-weight title from defending champion Anne Sophie Da Costa (18-1, 7 KO’s) in Marne, France. The formerly undefeated champion had held the title since 2012, but made just one defense since, fighting three non-title contests. Perez had never held a world title before, though she did challenge for IBF and WBF titles in the past.

Elina Tissen (18-2, 6 KO’s) took a 10 round decision over Jasmina Nadj (4-5-1), successfully defending her GBU and WIBF featherweight belts. Tissen had been unbeaten in 11 bouts with nine of those wins coming in world title affairs. She also holds the GBC featherweight title, which wasn’t on the line in this bout. Nadj’s record speaks for itself; last month she lost a challenge for the World Boxing Foundation bantamweight title.