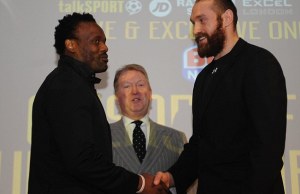 With the year about to enter its final month, this weekend sees the promise of some real fistic fireworks when Britain’s main heavyweight rivals Tyson Fury (22-0, 16 koes) and Derek Chisora, (20-4. 13koes) finally meet for their long awaited rematch, at Excel Arena, Docklands, London.

This is a grudge match that was originally due to take place in July, but was cancelled at the last minute when Chrisora injured his hand. For Fury, it was the latest in a bizarre and unlucky run of big fight cancellations, which he has had to deal with after spending much of last year training for a showdown with David Haye, only to have Haye pull out on him twice with injuries, eventually leading the fight to be scrapped altogether. The two men will be contesting Chisora’s European title, and the vacant British championship, with the winner set to be just a step away from a shot at world heavyweight champion Wladimir Klitschko.

Both men previously fought each other three and a half years ago, with Fury emerging the victor on points, after a hard fought contest. On that night, Fury’s extra size, speed, and boxing skill proved to be just a little too much for the marauding slugging style of Chisora, and he came away with a point’s victory, and Chisora‘s British and Commonwealth titles.

This time round, Chisora says things will be different. It is a fact that “Del Boy”, as Chisora likes to be known, went in against Fury in less than tip-top condition. It was a time in which Chisora was erratic both in and out of the ring, with fluctuating weight inside the ring, and a troubled personal life outside of it.

Seven months after losing to Fury, Chisora was given a surprise shot at Vitali Klitschko’s WBC world heavyweight championship, and caused a stir by lasting the distance with Klitschko, and giving a good account of himself in the process. If his point’s loss to Klitschko had boosted his reputation even in defeat, Chisora’s brawl with David Haye in the post match press conference undid much of his good work and resulted in him receiving a ban by the British Boxing Board of control. Five months after the Klitschko match and while still banned by the BBBC, Chisora fought Haye at Upton Park, and was stopped in 5 rounds. Since losing to Haye, Chisora has rebuilt his career (with the help of counselling for anger management) and has seemingly become a more controlled and focused person both in and out of the ring. There has been a run of five consecutive victories, and a collection of titles, of which the European championship is by far the most prestigious. During this run of victories, Chisora has been a calmer person than previously in his career, and has looked progressively fitter with every fight.

Ironically, while Chisora has already had a shot at a world title. Tyson Fury, despite being unbeaten, has seen his career stall amid inactivity. Fury seemed to have made a breakthrough in December 2012, when he out-pointed Kevin Johnson in a WBC eliminator fight. Yet, instead of getting a world title shot for this victory, Fury has fought just two times in the last 2 years, as he saw a proposed big fight with David Haye cancelled twice, and then finally abandoned altogether. Fury has also seen his match with Chisora postponed in the summer and more recently has had to deal with the death of his uncle and former trainer Hughie Fury.

If there is a positive for Fury, to come out of his last 18 months of tribulations, it is that he is hungrier than ever to finally break into the big fights and the big money.

Although this has been billed as a grudge match, both men have been remarkably serene and controlled since the postponement of their original date in July. This may have something to do with Fury being fined £15,000 by the BBBoC for an expletive fuelled rant in the summer.

Despite their calm outward appearances, both men know the importance of this fight to their respective careers. The winner will be poised to be granted a shot at Wladimir Klitschko, while the loser will most likely have to content himself returning to the domestic scene for meaningful matches.

With both boxers seemingly in top physical shape, this becomes a close fight to call. Their first match was competitive, with the main difference being Fury’s superior conditioning, size, and boxing ability. Despite Chisora coming into this rematch with much improved fitness, Fury still holds the upper hand in terms of size and boxing ability. Fury’s own conditioning has varied in his recent fights, but he looks to be in peak condition for this rematch, both mentally, and physically.

When he is fit and focused, Tyson Fury has a good jab and impressive mobility for such a big man. Standing six feet nine inches to Chisora’s six feet one, Fury will look to keep Chisora at bay with his long jab. Unusually for such a tall heavyweight, Fury is also adept at infighting when he wants to be. Fury has been floored in a number of his fights, but usually his knockdowns have been caused as much by carelessness as by him being severely hurt. Against Chisora, Fury should be suitably focused so that he will not make any careless mistakes.

Chisora, despite his added experience and fitness, is still somewhat limited and has not always impressed in his recent run of victories.

After three and a half years, the attributes which took Tyson Fury to victory over Chisora in their first match, will prevail here in their rematch. Fury should be able to keep Del Boy at bay for long periods with his jab, and when Chisora does manage to work his way into range and get on the inside, Fury should be able to hold his own in the trenches. This fight will probably see Chisora at his most dangerous early on and Fury gaining control by the middle rounds. With both men in top condition and desperate for the victory this may well be one of those rematches which surpass the first fight. However, eventually Tyson Fury’s extra size and ability will see him gain control, and emerge the winner, either on points, or by a late rounds knockout.

If Tyson Fury vs. Derek Chisora is an intriguing rematch, then the fight directly supporting the heavyweight clash is one that has been threatening to over shadow it. Unbeaten British, European, and Commonwealth middleweight champion Billy Joe Saunders (20-0. 11koes) defends his titles against the also unbeaten Chris Eubank Jr. (18-0, 13koes); in a match in which the mutual animosity of the two protagonists has long since eclipsed the so-called ’grudge’ existing between Chisora and Fury.

Eubank Jr. is the son of former WBO world middleweight and Super-middleweight champion Chris Eubank, known for his monocles and lisp, and his exciting series of fights with the likes of Nigel Benn, Michael Watson, Steve Collins, and Carl Thompson. Over the past 3 years, Chris Eubank senior has guided his son to 18 victories over mediocre opposition, to mixed reviews by fans and critics alike. Some have been impressed by Eubank Jr.’s core skills, and the way in which he has dispatched the opponents put before him, others have pointed out the limitations of the opposition and claimed that Chris Jr. will be found out as soon as he steps up in class. Now comes the moment of truth for both father and son.

Like his father before him, Chris Eubank Jr. has taken on the kind of ring personality that tends to split fans and critics alike. While some see him as intriguing and entertaining, others call him arrogant and overrated.

Eubank Jr. has been trained by his father’s old trainer Ronnie Davies, who has stated that the son is a better boxer than his father was before him. Eubank senior has declared that his son is the most dangerous fighter around now and compared his talent to that of Sugar Ray Leonard.

After maneuvering Eubank Jr. into this match with Saunders, the truth behind all the claims about Eubank Jr.’s ability will be there for all to see. Saunders has had far more experience at championship level and has gone 12 rounds five times. Meanwhile, Eubank Jr. has never gone beyond 8 rounds.

Those who are dismissing Eubank Jr. would do well to remember how his father emerged suddenly from obscurity to beat Nigel Benn for the WBO world middleweight championship. Although this match isn’t for the world title, the winner will be in line to fight the winner of Matt Korobov vs. Andy Lee match later this month for the WBO world middleweight title.

There has been genuine dislike between the Eubank and Saunders camp in the run up to this match. Some of the things said by Saunders have been genuinely nasty, while Eubank Jr. has treated Saunders with a mixture of aloofness and disdain.

Aside from the personality clash, this is a genuinely fascinating fight style wise. Saunders is a good boxer with good mobility and hand speed, while Eubank Jr. looks to have a sound technical base along with a decent punch. In many of his contests up until now, Eubank Jr. has looked to be only in first or second gear, and has ‘played’ with many of his opponents. This is the fight where we should get to see what happens when Chris Eubank Jr. gets pushed into his higher gears. Against his limited opposition, so far Eubank Jr. has shown flashes of precision punching and concussive power.

If Saunders has a weakness, it is the lack of genuine world class punching power, the kind of power that Eubank Jr. seems to possess.

This is the kind of match where sometimes you go with your instincts rather than logic. Logic tells us that Billy Joe Saunders has all the advantages save for punching power, but often boxing goes beyond logic, and where sheer raw talent is concerned, logic is often rendered meaningless.

This is a match that could be the fight of the night, but Eubank looks to have that certain something that may make him a very special fighter over the next few years. This could be the night where British boxing wakes up to find it has a new star.

While Billy Joe Saunders is undoubtedly a talented fighter, Chris Eubank Jr. looks to be a genuine world-class talent, and it is this distinction that will take Eubank to victory over Saunders, either via points or late rounds stoppage, after what may be one of the fights of the year.