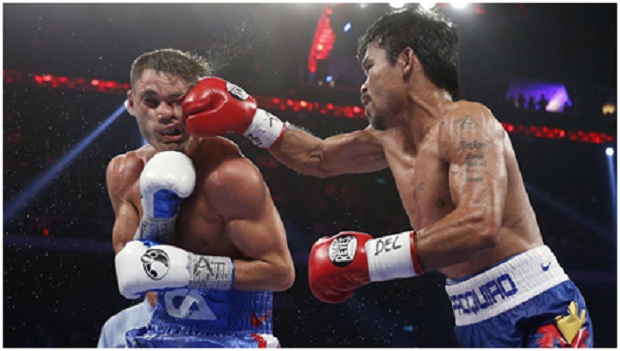 “Usually, the best do fight the best somewhere along the line, sometimes too soon, sometimes it’s a little late. But it’s going to be a good fight.”—Roach

“I’m crossing my fingers – hopefully that fight will happen by next year,” –Manny Pacquiao

Pacquiao has reportedly told The LA Times that he’s willing to accept the fight at terms the Mayweather side has told the Times will be required to make the fight happen. If that’s true, then the onus is now on Junior to step up and make the fight. And if he doesn’t, his legacy will always be tainted as long as he rationalizes away this monster mega fight. Floyd can run but he no longer can hide.

On the flip side, sources close to Mayweather say he has never wanted the Pacquiao bout more than he does now. According to Al Haymon spokesperson and ring cheerleader Sam Watson, Floyd is beyond eager to step into the ring to finally close the chapter on the long-awaited matchup. “Floyd wants to fight him real bad. Floyd, that’s all he talks about is fighting Manny Pacquiao, so once the deal is set and done, you’re going to be seeing the biggest fight you ever saw in your life,” Watson said.

But there is at least one big “But” to wit: Mayweather has only two bouts left to complete his six-fight contract with Showtime. He has to battle two more opponents, one in May and the final one in September. Conceivably he could fight a Jermain Taylor of Jessie Vargas to get to 48-0 and then finish his career against Pac-Man with a rematch clause in the contract should he lose in what would be one of the greatest match-ups in boxing history. A trilogy would also be a possibility adding to the Fort Knox haul. Said one observer, “you can buy pay-per-view one week for a certain price, a $100, next week you buy pay-per-view for $60, and the next week you get it for free. It’s big.”

Everybody wants it—and I mean everybody. This time, we just might get it.