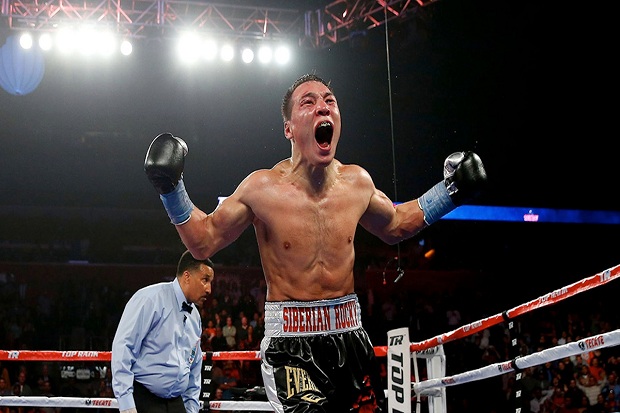 The result to Friday’s Moscow bout between Ruslan Provodnikov (24-3, 17 KOs) and Jose Luis Castillo (66-13-1, 57 KOs) was never really in doubt from the moment the fight was signed. The only question seemed to be– when, exactly, the shopworn 40-year-old Mexican would fall under the heavy pressure of “The Siberian Rocky.”

The answer to that question turned out to be “five rounds” in a contest where the fight became increasingly one-sided as rounds passed.

The 30-year-old Provodnikov battered the former lightweight world champ to the head and body throughout the contest, but turned on the heat in the fifth round, scoring a knockdown and then the stoppage.

Team Provodnikov claims to have made both Zab Judah and Mauricio Herrera offers in the mid-six figures range to make the trek to Moscow, but was unable to secure either fighter. Castillo was then contacted to fill the role of “opponent,” much to the dismay of most fans and media members.

Realistically, this bout against a faded former champ fighting nine years and two weight classes past his prime, was nothing more than a “stay busy” fight to finish off a rather disappointing 2014 for Provodnikov.

For the Russian battler, the first part of the year was spent searching in vein for a credible big money opponent and then, the second part, regrouping after losing his WBO 140 lb. title via controversial split decision to Chris Algieri in June.

But now thoughts turn to 2015 and the career aspirations of an entertaining all-action fighter with real liabilities in the ring, but tremendous upsides in terms of entertainment value.

In the Top Rank-Golden Boy world, Provodnikov is a free agent as a member of the Banner Promotions stable. His promotional status does, however, align him more with Top Rank since the two have worked together before and Top Rank even had co-promoter options on a couple of his fights– a deal which expired with the Algieri bout.

The bad news for Provodnikov is that his people may need to work the other way and endear themselves with the folks at Golden Boy (or, perhaps more accurately, endear themselves to adviser Al Haymon, who controls much of what used to be considered Golden Boy assets.) as they have the much deeper roster within the 140-147 lb. weight range.

The Haymon/GBP side can deliver some real opportunities to Provodnikov, but it may cost him his independence in return. Off the top of one’s head, there’s WBA/WBC champ Danny Garcia, who should be looking for a credible opponent to win back fan support after an extremely poorly-received 2014.

Behind Garcia, there’s Lucas Matthysse, who can not only help produce a Fight of the Year war, but also provide a clear route to an immediate world title bout.

At welterweight, there’s a plethora of viable big fight options, including Shawn Porter, Marcos Maidana, Keith Thurman, and Robert Guerrero. A solid win over any of these names could lead to the biggest prize of all, Floyd Mayweather.

On the Top Rank side of the fence, there’s Brandon Rios, who would surely deliver one-half of a Fight of the Year-level brawl, but can’t deliver a belt or even a guaranteed title shot to the showdown. Juan Manuel Marquez has nixed the idea of facing Provodnikov, at least in the immediate future, and Timothy Bradley, who warred with the Russian in last year’s Fight of the Year has shown no real eagerness to revisit the battle.

Jessie Vargas, who owns a minor belt at 140, is an option, as is any of the quality young talent reportedly moving up to 140, like Terence Crawford and Mikey Garcia. And, actually, post-Terence Crawford victory on Saturday, Arum did mention Provodnikov as a possible opponent for the upwardly mobile lightweight champ from Omaha. However, how willing is Top Rank to risk a young, undefeated talent on the rise against a dangerous, albeit limited slugger, with whom they’ll only have a partial agreement? We’ve already seen Provodnikov as the expendable partner and it may be in his own best interest to not go back to Top Rank, unless the deal is remarkable.

So, at the end of the day, that leaves the former WBO junior welterweight champion with plenty of possibilities, but not many concrete options at all.

Ranked only by the WBO (No. 2, behind Lucas Matthysse), he also can’t really count on a title shot being dumped in his lap anytime soon.

The best option for Provodnikov, whose three career losses have all come with at least some controversy attached, may be the worst for his fans in the West. The likable, fan-friendly battler could stay in Mother Russia and the emerging Eastern Bloc, fighting second and third tier fighters like Jose Luis Castillo for loyal and appreciative crowds until some sanctioning body comes along, sniffs a regional draw, and finds a way to issue him a secondary world title of some sort.

Right now, for European fighters, it’s a seller’s market as the emerging presence of former Soviet nations is allowing for a plan B to all those Eastern European fighters unwilling or unable to navigate the murky, cliquey waters of the American scene.

Expect Provodnikov to keep pursuing a career in America and a truly big money bout, but don’t be surprised if, by mid-year, he doesn’t fall back to a Euro back-up if the big fights still won’t come his way.