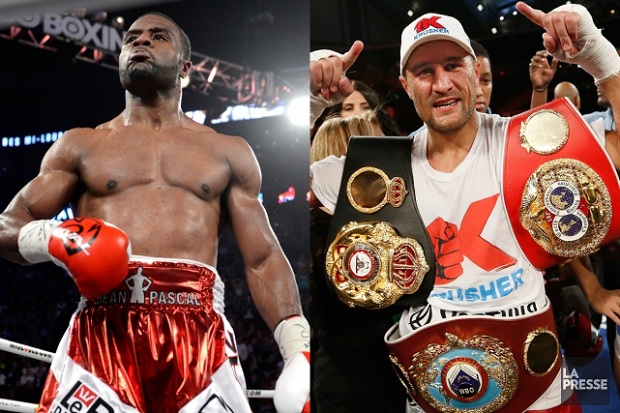 It was confirmed earlier today that Main Events and InterBox, promoters of Sergey Kovalev (260-1, 23 KOs) and Jean Pascal (29-2-1, 17 KOs), respectively, have reached an agreement for their two light heavyweights to meet on an HBO telecast set for March 14 in either Montreal or Quebec City.

However, the showdown for Kovalev’s WBO/WBA/IBF world light heavyweight titles is contingent upon two things: 1) Pascal must beat Roberto Bolonti in their scheduled bout this Saturday, December 6 and 2) The IBF must allow Kovalev to temporarily delay his mandatory bout with no. 1 contender Nadjib Mohammedi.

But since Pascal is heavily favored over Bolonti and Mohammedi recently signed a promotional deal with Main Events, thereby facilitating a “step aside” deal, Kovalev-Pascal has to be considered pretty much a done deal. As a matter of fact, Mohammedi is already talking “step aside” as he’d like to work with new trainer Abel Sanchez a bit more before taking on Kovalev.

Pascal was no. 1 light heavyweight contender in both the WBO and WBC and had started preliminary negotiations with WBC titlist Adonis Stevenson for an all Haitian-Canadian clash, but snatched up the Kovalev deal when talks with Stevenson’s people hit an absolute dead end.

“The negotiation with Main Events went quickly and smoothly, so I know we’ll be able to organize a high-caliber fight and a great night of boxing. After a pretty mediocre 2014 so far, we’re preparing to offer Quebec boxing fans one of the best fights we could make in the entire division,” InterBox promoter Jean Bedard said via press release.

Standing out in the cold amidst all the light heavyweight headline-making action is Adonis Stevenson, who had the inside track to fights with Kovalev, Hopkins, and Pascal before losing all three big money bouts, reportedly due to an inability or unwillingness to seriously negotiate terms for the bouts. Stevenson will next take the ring on December 19 in Quebec City against Russia’s Dmitry Sukhotsky.