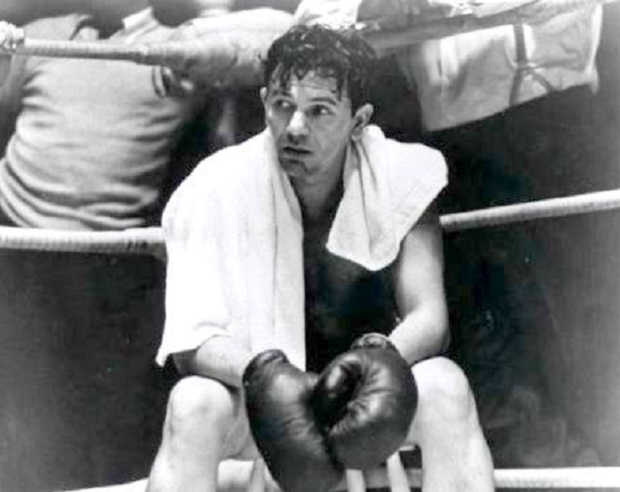 “What are you gonna do? Kill me? Everybody dies”
–Charlie Davis

Before Body and Soul was made in 1947, most boxing films had a universal theme.

The hero was close to perfect. If he did anything wrong, it wasn’t usually his fault. If it was, by the end of the film, he’d atone and make up for it in spades.

In Body and Soul, starring John Garfield, the hero is cast in shades of gray.

In other words, he’s human.

The 33-year-old Garfield was the driving force behind the film having turned down a contract extension from Warner Brothers the year before.

The move was seen as crazy in Hollywood. Garfield had been a star since exploding on the movie scene eight years before in his first film, Four Daughters. His career was going well.

His talent was respected, but Garfield wanted more.

“I want to make pictures with a point-zing, spit, fire,” he told journalist Mary Morris.

Garfield formed his own film company in 1946. For his first project he chose the story of former lightweight champion and war hero, Barney Ross, who also battled and defeated a drug problem.

The film was in production hell until screenwriter Abraham Polansky met Garfield for lunch.

Polansky had come up with his own version of Ross‘s story. He discussed it with Garfield, who liked what he heard. The working title was Body and Soul.

The movie is set at the height of the depression. Garfield plays Charlie Davis, a poor kid with dreams. He wins a trophy in an amateur boxing tournament, and realizes that fighting is his ticket out of the slums. But his mother is against it.

He can’t find a job and is embarrassed to let his girlfriend Peg (Lili Plamer) see where he lives.

After the unexpected death of his father, due to a bomb exploding in the family store, Charlie is left with few choices. His mother’s (Anne Revere) failed attempt at securing a government loan sets him off in search of relief.

Even though it’s been almost seventy years since the movie was filmed, the dialogue crackles.

“Shorty get me that fight from Quinn,” Charlie screams at his friend. “I want money. Do you understand…money, money!”

His mother, beside herself, replies “I forbid, I forbid. Better buy a gun and shoot yourself.”

“You need money to buy a gun!,” barks Charlie.

With the support of Peg, Charlie turns professional. He’s a natural fighter, and streaks up the rankings. He wins his first 21 fights with 19 knockouts. He wants a shot at the title.

To get that shot, fulfill his dreams, and his pockets, Charlie has to make a deal.

An icy gangster named Roberts (Lloyd Gough) appears at Charlie’s new penthouse door. He wants in on the action. He smells money.

Charlie’s best friend Shorty (Joseph Pevney) bluntly tells him the way it is.

“He doesn’t care about you,” Shorty says. “He just wants his piece of the pie.”

Charlie, oblivious, or driven by blind ambition, replies, “It’ll be a bigger pie, more slices for everybody.”

Roberts sweetens the deal by giving Charlie an envelope overflowing with cash.

Always a little rough around the edges, he grows more ruthless. His relationships suffer, including his friendship with Shorty, who dies later in the film.

Roberts delivers Charlie his shot at a title. The champion, Ben Chaplin (Canada Lee) owes Roberts money. He’s also dealing with a blood clot, suffered in a previous fight. He accepts the match with Charlie as long as the hungry challenger takes it easy.

Roberts agrees, but doesn’t tell Charlie about the deal.

The bout is no contest. Charlie brutalizes Chaplin in two rounds. The beating nearly kills him. Shorty finds out the truth of the match. He tells Roberts he’s done and that Charlie will quit too. But Charlie, after working so hard, and selling out to the devil, won’t quit. He feels terrible about Chaplin but still can’t walk away. He later asks him to be his trainer.

Charlie’s now the champ, but in the process he loses Shorty, who dies, and his supportive girlfriend.

He dives into the role of a champion while Roberts continues to fill Charlie’s pockets with fat envelopes.

The day of reckoning finally comes when Charlie stops by Roberts’ office to collect another advance. This time the mobster turns him down.

He tells Charlie he needs to fight again. He can square things with Roberts by doing him a favor. He has to fight a young, up and coming boxer–and–he has to lose.

Conflicted, and worried, Charlie ponders what to do. He turns to his loyal ex-girlfriend Peg and his mother for advice. At one point, after learning that his old neighborhood is betting on him to win, he explains to them what he’s up against.

“There’s a million bucks riding on my back,” he says.

“If I don’t fight, I don’t get a dime. I’m all mobbed up, tied hand and foot, down to my last buck. You think I want to end up like Ben, punchy, with a blood clot on the brain, ready to die any day–or with a bullet in my back in an alley?”

The climatic fight is a mixed bag of betrayal and revenge. I won’t reveal the ending, but trust that Charlie finds himself in the nick of time.

The film won an academy award for best editing. Garfield landed a nomination for best actor and Abraham Polansky was nominated for his hard-hitting screenplay.

That’s a shame, because Garfield’s performance is riveting. He’s edgy and charismatic. He carries the film with his gutsy acting.

Former prizefighter Canada Lee, as his haunted trainer Ben Chaplin, almost matches him. Their scenes together are wonderful. Chaplin’s tragic death, near the end of the film, is powerful and hard to shake.

The movie has a haunted quality which foreshadows the futures of Garfield and Lee. They would both die within a weeks of each other in 1952.

Body and Soul has earned the right to be called a great film. It encapsulates a time and place in this country that later generations would not relate to.

At the same time, the film resounds as a reflection of today’s boxing scene where lies and corruption still cause havoc and disillusionment awaits the ambitious.

But most of all, it’s a testament to the brilliance of Garfield, who was determined to make films of importance and value.

In this reviewer’s opinion, he succeeded.

John J. Raspanti is the lead writer for Maxboxing and Doghouseboxing. He also appears every Sunday on The Ringside Boxing Show. John has loved movies all his life, especially the old ones.