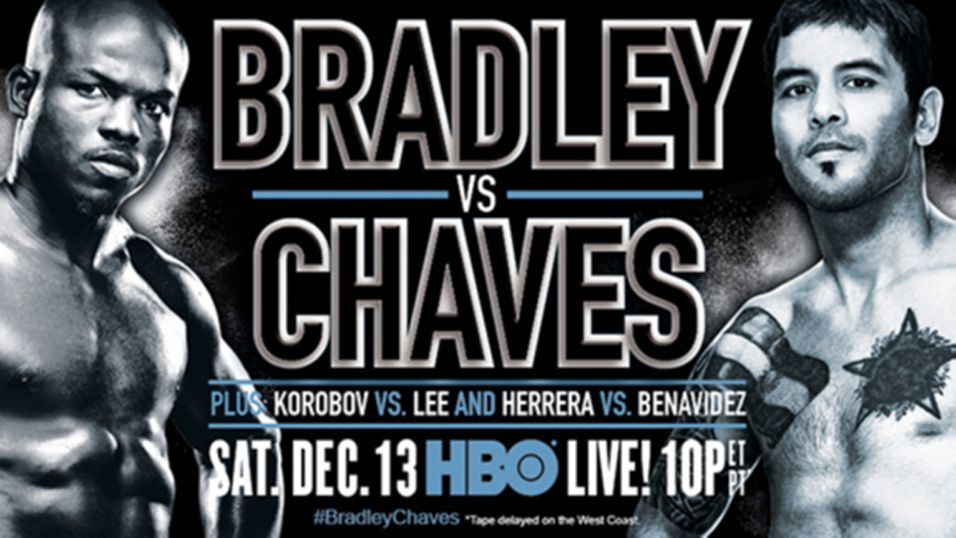 HBO will close out a lackluster 2014 with a tripleheader this Saturday, December 13 beginning at 10 PM ET/7 PM PT from the Cosmopolitan in Las Vegas, Nevada. Former two division champion Timothy Bradley (31-1, 12 KOs) will headline against hard-hitting Argentinean Diego Chaves (23-2, 19 KOs) in a non-title fight set for 12 rounds. The broadcast will open with prospect Jose Benavides (21-0, 15 KOs) and Mauricio Herrera (21-4, 7 KOs) vying for the Interim version of the WBA’s junior welterweight title. The co-feature of the night will pit popular Irish middleweight Andy Lee (33-2, 23 KOs) against undefeated Matt Korobov (24-0, 14 KOs), with the vacant WBO middleweight title on the line.

Bradley is fighting for the first time since his first official career defeat, suffered in April against Manny Pacquiao. Like Bradley, Chaves is also on the heels of a loss, the second of his career. It goes without saying, but both men would be well served to get back on a winning track. For Bradley, another loss won’t likely be career killer, but his stock will drop significantly. A loss for Chaves would be his third loss in three tries on American premium cable, and relegation back on the Argentinean club circuit will be next.

Bradley announced his arrival as a real player by making a trip across the Atlantic to take Junior Witter’s WBC junior welterweight title in 2008. Bradley would go on to take Kendal Holt’s WBO title and drop his WBC title and make five more defenses before winning the Manny Pacquiao lottery in 2012. A controversial win brought more ire than praise, and Bradley responded by going to war with Ruslan Provodnikov in his next fight. Bradley, underpowered and overly determined, stood in the pocket and slugged it out with the slugger, hitting the canvas three times in the fight and walking away with a concussion and the win by the skin of his teeth. Bradley went on to outbox Juan Manuel Marquez before dropping a decision to Manny Pacquiao in April.

Diego Chaves, already an attraction in his native Argentina, was brought stateside to test hot prospect Keith Thurman last July. Chaves gave Thurman just about all he could handle in the early rounds, but eventually folded under Thurman’s exceptional power and was stopped in the tenth. After a comeback win in Argentina, Chaves was pitted against Brandon Rios. Chaves held a slight lead on the scorecards of an ugly, foul-filled scrum when he was disqualified for allegedly using his thumb to gouge Rios’ eye in the ninth round of a scheduled ten.

Bradley doesn’t possess the power to stop someone with the toughness of Chaves, but he’s one or two levels above Chaves and won’t have any problems out boxing him to win the decision. The likelihood that Bradley will employ the fight strategy used against Provodnikov is not great, and the only way this fight ends before the final bell is if Chaves chooses to make it dirty.

Since losing to Julio Cesar Chaves Jr. in his first world title bid two years ago, Lee has fought mostly club-level opposition. In his last fight, Lee was on his way to being knocked out by John Jackson when he landed a perfect left hand that dropped Jackson for the count. Lee is currently ranked number 3 by the WBO, and got the nod to challenge for the vacant title when Demetrius Andrade walked away from negotiations.

Korobov, despite a strong amateur background and Olympic experience, has been brought along slowly. Korobov passed early career tests against gatekeepers Derrick Findley and Ossie Duran, but his resume is front-loaded with club fighters. Korobov has shown a steady improvement and a strong defense, and he’ll be put to the test against a veteran like Lee.

The opening bout will feature rising prospect Jose Benavides (21-0, 15 KOs), who burst onto the scene amongst plenty of hype in 2010. Benavides turned down a shot at making the 2012 US Olympic team, opting to turn pro at 17 instead, and has been kept busy since. He’s taking a large step up, however, as he’s never faced someone with the experience and skill of Herrera and has never had a fight go past – or even scheduled for more than 8 rounds.

Herrera won his belt, the WBO’s Interim junior welterweight belt in his last fight against Johan Perez. Prior to his won over Perez, Herrera challenged junior welterweight champion Danny Garcia and lost a controversial decision to a sluggish Garcia. Herrera can also lay claim to a bona fide win over Ruslan Provodnikov on Friday Night Fights in 2011.