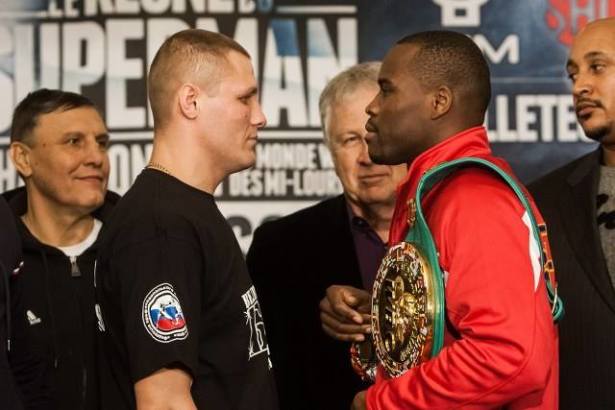 This Friday at Colisee de Quebec in Quebec City, Canada, Adonis “Superman” Stevenson (24-1, 20 KO’s) makes the fourth defense of the WBC light heavyweight title against Russia’s Dmitry Sukhotsky (22-2, 16 KO’s). The contest, to be broadcast live on Showtime, headlines an eight bout card that also features Kevin Bizier, Andre Dirrell, and Artur Beterbiev in three under card fights that will also be televised.

Stevenson had a banner year in 2013, winning the Boxing Tribune’s Fighter of the Year award. The former super middleweight jumped up to the light heavyweight division and scored four knockout victories; after avenging his lone defeat to Darnell Boone, his title winning stoppage of Chad Dawson earned him the WBC strap and the Tribune’s knock out of the year. He went on to stop former world champion Tavoris Cloud and European titleholder Tony Bellew in his two defenses.

Oddly, Stevenson’s momentum didn’t carry on through 2014. Early in the year he signed with the powerful Al Haymon, which lead to his move from HBO to Showtime. Though he’d been mentioned repeatedly in the same circles as Sergey Kovalev, Bernard Hopkins, and Jean Pascal, none of those proposed mega fights came to fruition and he saw action just once when he faced Andrzej Fonfara in May.

The Fonfara bout didn’t do him any favors. The challenger turned out to be much tougher than expected, and the champ hit the canvas before going the full distance for the first time in over six years. It was the type of performance that had the previously undecided fans now looking at Sergey Kovalev as the world’s best light heavyweight. Kovalev’s shut out win over the legendary Bernard Hopkins to unify the WBA, IBF, and WBO light heavyweight titles did even more to justify that stance.

“Superman” has a shot to end the year on a high note though, when he faces off with Sukhotsky, the former holder of the WBO Inter-Continental, EBA, and IBF International light heavyweight titles. The closest the Russian challenger has come to facing anyone on Stevenson’s level was his 2009 WBO light heavyweight title challenge against Juergen Braehmer, a bout that saw Sukhotsky comfortably out-pointed over 12 rounds, though he did come close to stopping Braehmer late in the fight. He’s also lost to Cornelius White, another former regional title-holder who’s failed at the upper levels of the division.

It’s easy to pick Stevenson going into this one, but the disparity in opposition levels between him and Sukhotsky make it hard to say how the challenger will react when he gets tagged. Sukhotsky is a tough competitor with a good jab, and should come in highly motivated and well prepared for the opportunity in front of him. He has a tendency to leave himself open defensively, and isn’t very light on his feet, which will make him a sitting duck for Stevenson’s power. The champs superior ability should allow him to land enough heavy shots early on to wear down his opponent, and score a stoppage in the latter half of the contest.

Stevenson is looking ahead to a more productive year in 2015. An impressive knockout over Sukhotsky would be a good place to start.