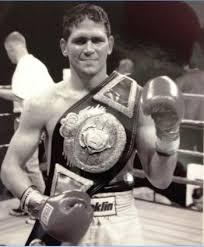 “Dangerous Dana” (16-0) vs. the “Irish Express” (18-1-2).  Two Boston area guys with plenty of pop face off for the USA New England middleweight title in Foxwoods Resort in Connecticut. Most expect a close encounter. What they got was a mugging extraordinaire and a glimpse of a new kid on the block.

A very confident Sean Fitzgerald, whose only prior loss was to Roberto Duran, came into this fight after having discovered so-called “weaknesses” in Dana’s game. He also had two draws with tough Peter Manfredo. But this time around he never saw the 2nd round as Dana won the New England Middleweight belt and improved to 17-0.

A very young Michael Buffer got things started, but things ended almost before they started as southpaw Rosenblatt showed why his moniker was “Dangerous.”

With 1:01 remaining in the first round, Dana, a former martial arts champion, closed off the ring and decked Sean with a powerful right cross. Shortly after, an exchange in the corner featuring a ripping left hook ended the quick and lethal assault. The express was derailed at the first crossing.

In 1993, Rosenblatt wore a pair of trunks for his 15th fight with the Star of David symbol sewn into them, harkening back to the legendary Jewish fighters of the 1930s like Benny Leonard and Barney Ross, who started the practice. He retired from boxing in August 2003, with a record of 37-1-1 (23). He was one of the few Jewish boxers active in the 1990’s and had some notable notches on his belt including Vinny Paz (against whom he suffered his only defeat (in a two-fight legendary duel), Terry Norris, Arthur Allen, Glenwood Brown, Howard Davis Jr., Pat Lawler, Brett Lally, and Chad Parker. A credit to boxing, he is also a worthy member of the Connecticut Boxing Hall of Fame.