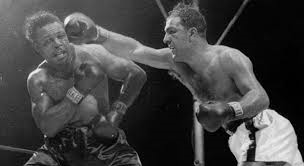 Welcome to another edition of What If?, as the first round of the heavyweight tournament group stage continues.  Read the intro and method here. Catch up with the 1910s and 1950s group stage in Episodes two and six.

Previously, on What If:

As we go into the final group-stage fights, Jack Johnson and Ezzard Charles have nothing to play for; they are 2-0, their tickets punched, their 0-2 opponents, Frank Moran and Ingemar Johansson, eliminated from playoff contention.  What’s more, the 0-2 guys couldn’t even play spoiler, since the winning fighters had also clinched the top seed out of their groups by virtue of owning a tiebreak over both of the fighters whose records were even.

That said, the guys with the even records, the fights between Jess Willard and James Jeffries and between Rocky Marciano and Archie Moore?  Those are win or go home.  These aren’t guys fighting glorified exhibitions…these are guys fighting for the pride of history.  With that in mind…

In 1914, these two men fought in Paris to a 20-round decision back when “decision” meant that the referee, in addition to officiating the fight, rendered a verdict on who he thought had done the better job.  There wasn’t a scorecard as such; the referee judged the overall value of the fight rather than today’s 10-point must system in which individual rounds count equally unless someone is knocked down.  A few close rounds going one guy’s way can wipe out decisive rounds in which the opponent carries the action throughout the three minutes.  If you want the root of bad but defensible decisions, there’s your problem (corrupt decisions paid for by promoters, along with the blatant incompetence of C.J. Ross, are another story.)

Judging in 1988 is not nearly so holistic, and the vision of the referee cannot be manipulated so as to make it appear a fighter is doing better than he is, and Jack Johnson knew that well enough.  Still, he knew that he could carry the man in front of him, who’d been beaten, disheartened, and slasher-movie-level bloodied besides in his last fight.

What happens when a broken man fights a guy who doesn’t want to kill him?  A boring ten rounds of a disinterested cat stalking a frightened mouse, and rather than getting Tom and Jerry, you get Garfield Minus Garfield.  The crowd booed, the fighters hardly threw punches, but without doubt only one man was in any manner of control.

Jack Johnson won the fight on all three cards, 100 to 90, and Ingemar Johansson, watching the fight ringside to get some sense of what the other odd man out in tonight’s action would do, finished a turkey sandwich someone had brought him and got ready for his actual fight.

Johansson, fighting for pride, decided he wanted to try and knock out the man in front of him rather than meekly surrender like his counterpart in the previous fight.  Charles, fighting to send a message that he was one of the true favorites in this tournament and, if Boxrec is to be believed, a top-five all time pound-for-pound fighter (seriously, look it up—they’ve got him fifth, while Rocky Marciano is 18th), wanted to get to 3-0 in style but knew the potential danger standing in front of him.  Charles had a much better chin than the notoriously knockout-prone Floyd Patterson, but hitting someone is only 10 percent of boxing; the other 90 percent is not getting hit.

Still, Charles had boxed circles around Rocky Marciano not long prior, and his strategy was similar here.  And oh, what a strategy it was.  Johansson was utterly confounded, unable to push the pace, coming forward with plenty of volume punching but finding only elbows and gloves rather than face and body.  Charles would endure the combinations with no damage taken, and his ability to catch the Swede on the way out was a bit of counter-punching that was worthy of smaller men like Whitaker and Greb more so than the large fistic colliders in play in a heavyweight tournament.

The best part?  A cagey fighter who can frustrate his opponent will eventually frustrate him into mistakes.  Johansson started telegraphing, coming in with his hands down and eating shots without getting one of his own off.  When he was able to engage, he began to pull straight back…and it was then, in the seventh round, that the Cincinnati Cobra made his lethal strike, crashing home a straight right hand that caught a backpedaling Johansson right on the point of the chin and had him flopping around on the canvas like a freshly-caught fish, moving his hands like he had an imaginary boxer in front of him whom he was trying to punch.

The finish was a satisfying end to an otherwise meaningless fight, and Ezzard Charles had run the table.

James “Bonesaw” Jeffries earned a nickname to take back with him to 1903, and for those wondering how that changed the course of history and how the narrative of the original fight with Jack Johnson would have gone despite Jeffries knowing how it would end 78 years later in a high school gym…well, repeat to yourself, “It’s just a show, I should really just relax.”

Hodgson’s Law aside, what we’ve got here is two guys who can beat the hell out of everyone not named Jack Johnson fighting for the opportunity to face a fellow from their own Next Sunday AD future in the next round.  There would be no timid churchmouse boxing here; each man in the ring, with common opponents having both whupped and been whupped, set out to draw blood and turn the ring into a massacre.

It wasn’t subtle.  It abandoned all premise of defense about thirty seconds in.  Jeffries broke Willard’s nose; Willard opened a cut with a headbutt that referee Georges Carpentier ruled a punch.  Blood began to flow and attacks began to target the vulnerable areas opened up by previous action.

The Bonesaw and the Pottawotamie Giant battled onward, neither man willing to succumb to his injuries.  Another punch opened up a gruesome X-shaped gash over the eye of Jeffries, causing the blood to flow at a greater clip.  Jeffries, his vision blurred, began to throw wildly, a “hit the one in the middle” mentality taking over his aim, as his foe may have been bleeding like a soldier at Verdun but needed only to taste his blood, not to wipe it out of his eyes.

Between the fifth and sixth rounds, Willard threw up into his spit bucket, but the fight continued, the old-fashioned attempts at slaughter continuing unabated as each man confounded the efforts of the judges to make any sense at all of how to score the rounds, and leaving press row similarly rendered in possession of the idiot ball trying to figure out how to score it themselves.  If this went the full ten, it might be incumbent upon all involved to call it a draw out of the sheer laws of good sense being so flagrantly violated that if police could be called upon to enforce such a thing, they would surely have entered the ring to arrest both fighters.

Finally, midway through round nine, what Willard lost in terms of his breakfast, he made up for in terms of his ability to take advantage of a blinded fighter in front of him, slipping a jab to the side of Jeffries’ cuts then uncorking a right hook that the Bonesaw never saw coming.  The mouthpiece went flying, Jeffries went tumbling, and Carpentier, in a French accent, yelled “eight, nine, TEN!” and the fight was over.

Someone at ringside got the idea to get a detergent company to sponsor the rest of the tournament, on the twin bits of logic that either the detergent company would find a whole new market in slasher movie villains and hit men, or else having such a tempting of fate would ensure that no blood was spilled in any future fights, just to make everyone involved look like fools.

Tonight, however, you could hardly see more blood if you threw a frag grenade into the crowd of spectators.

Marciano had capped off his career and picked up his 49th win without defeat or draw on September 21, 1955, as Archie Moore fell five times, four officially by knockdown and the fifth a controversial knockdown ruled a slip in round seven, en route to a nine-round defeat at the hands of the great champion.  Moore, for his part, fought into his forties, even dropping back down to light heavyweight to win a world title at that class at the age of 45, setting a mark for George Foreman and Bernard Hopkins to strive for much later in the history of the sport.

Youth and cagey veteranship ended up as part of the angle in this counter-factual rematch, as Marciano got a 29-year-old version of himself to fight a man who in frozen-in-time manner had 14 years on him.

With everything at stake and the loser to be stuck with a return trip to the past, a younger, fresher Marciano knew what he had to do.  The Old Mongoose in front of him may have been the more clever of the two men when all was said and done.  The pride of Brockton, Massachusetts may very well have been a dumb fighter who only knew how to slug, but if that is the case, he was one of the best ever at it.

The point is this.  There was no way in heaven, earth, or hell Rocky Marciano was going to lose this fight.  Every weakness Moore had in 1955 was amplified by the four additional years of age; every strength Marciano had was similarly enhanced by the slightly crisper, slightly fresher, slightly meaner edge that a man still on the right side of thirty brought to the table.

On the day he retired, the Brockton Blockbuster said to the press, “I just don’t feel like doin’ it anymore.”  Whatever misgivings the man may have had about his career in 1955, there was none of that on display here.

The fight itself was academic.  Moore was staggered by a right cross in round one, and spent the rest of the fight on the back foot.  Marciano knocked his opponent down twice in the fourth, once in the sixth, twice in the seventh, and finally for good in the eighth round, a left hook putting an end to the action as it crashed home right on the temple of the old man; he was all but asleep by the time his head landed on the canvas.  The count?  Obligatory, but extraneous.  Arthur Mercante could have counted to six hundred; ten minutes was how long Moore was out.

Fortunately, the old man did open his eyes and make a full recovery; it would be an interesting footnote to history to have a man drop dead ten years before his actual time but at an age that was somehow 29 years younger.  The space-time continuum may well have cried if that were the case, to say nothing of the Back to the Future-esque disappearance of 69-year-old Archie Moore, still very much alive and kicking in the prime timeline in 1988.

Then again, the Bermuda Triangle was kind of a fad at that point in popular culture…

NEXT WEEK: We know our first four participants in the Round of 16; the time has come to get them some opponents.  The action continues to escalate as What If’s Excellent Heavyweight Adventure rolls on.  Tune in next week for Part 11.

Fox Doucette writes the weekly What If series for The Boxing Tribune and contributes occasional features in the “prime” timeline as well.  He covered ESPN Friday Night Fights for this publication from 2011-13.  Fan mail, hate mail, and nitpicking me where I’ve flubbed a detail can be sent to beatcap@gmail.com.  Follow Fox on Facebook: facebook.com/MysteryShipRadio.