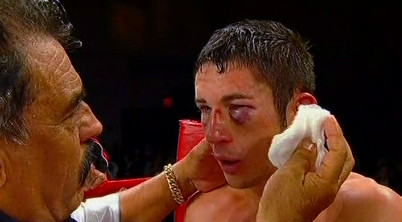 In the words of John Riggins, “I’m bored, I’m broke…and I’m back.” Welcome back to The Southpaw, the column with a better strength-of-schedule than Deontay Wilder:

When the guys at the Tribune were discussing our Year-End Awards, a special award category came up to put into perspective Mauricio Herrera’s two absolute robbery losses at the hands of Danny Garcia and Jose Benavidez in 2014. It should also be noted that Herrera squeaked out a majority decision win against Johan Perez in July that was closer than it should have been; our man Mauricio was nearly robbed on the cards three times in the same year.

Regular viewers of your columnist’s beat—and yes, I’m picking that role back up starting next week, so rejoice, my loyal army, rejoice!—shouldn’t be surprised to learn that Mauricio Herrera is 3-4 without a stoppage in his last seven fights. If you saw him get beaten silly by Ruslan Provodnikov on the 2011 FNF opener, or if you saw him rob Mike Dallas in a great “Teddy Atlas loses his shit” moment on ESPN’s flagship boxing show two fights later in that very same year, you’d have been able to tell the world “karma’s a bitch and he’ll get his eventually.”

In boxing, as in life, things have a habit of self-correcting. Chris Algieri learned what happens when you cross Ruslan Provodnikov on the cards; his reward was a fight with Manny Pacquiao watched only by boxing writers and bloodthirsty Filipinos and absolutely nobody else. Provodnikov got himself a nice helping of martyrdom for his trouble; whoever he fights next, there will be great interest, perhaps even more interest than a fight with anyone other than Pacquiao would’ve drawn for the Russian in this past year.

By the same token, sometimes getting robbed is the first step on the road to Palookaville; Mike Dallas Jr. was never the same after the Herrera fight. Dallas hasn’t fought since January of 2013, when Lucas Matthysse went out and damn near knocked his head off in the very first round…and speaking of winners, Dallas took that fight on a month’s notice when Hank Lundy (of whom your columnist is a fan, so consider that when reading the following) had to back out due to promoter issues. I’m not so sure Lundy would’ve fared any better that night, since Matthysse hits like he’s got Panama Lewis putting his gloves on for him, but for Mike Dallas Jr. it was the end of the line.

Back to the point at hand, Mauricio Herrera was basking in the glory of an utterly undeserved run through the boxing NBA D-League that is Friday Night Fights, and when your best legitimate win is against a completely shot Ji-Hoon Kim (Kim hasn’t fought since he notched a TKO win against a tomato can in a high school gym in his native South Korea in July of 2013 to go out with a victory after the Herrera fight), it’s hard to muster any real sympathy when the boxing gods choose that moment to cash in the debt with the devil incurred against Dallas and Provodnikov.

My Tribune colleague Ted Sares asked me what I could possibly have against Herrera when I gleefully celebrated his downfall. My answer was simple: “You rob a guy on FNF, you get on the Fox D shit list. Dem’s de rules.”

Now that Herrera’s paid his debts, however, with two robbery losses to avenge his ill-gotten gains, it falls upon me to wish him the best in 2015; perhaps a trip back down to the FNF ranks will give him a chance to fight on, and me a chance to write about him in the weekly Preview and Recap columns that are the best in the world at what they do for the boxing writing landscape.

But for now, if you’ll excuse me, I leave the last two words of my return column to Nelson Muntz.

Fox Doucette covers ESPN Friday Night Fights for The Boxing Tribune and writes the weekly What If? alt-history series for this publication as well. His weekly column, The Southpaw, appears on Thursdays. Fan mail, hate mail, and demands to hear the tale of just what the hell he’s been doing all this time since this column last aired can be sent to beatcap@gmail.com.